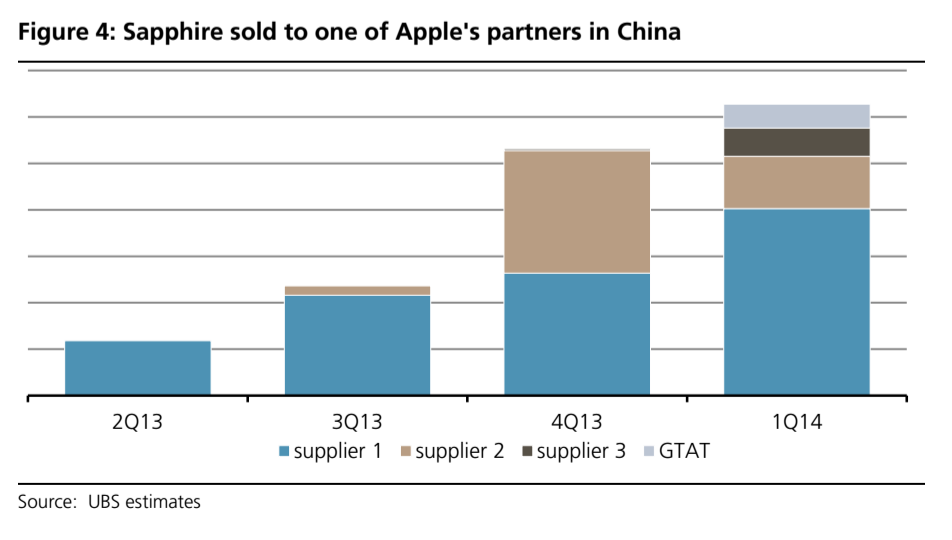 Apple for the first time started shipping sapphire from its new plant in Arizona to its suppliers in China ahead of ramping up the operation with more furnaces capable of supplying larger quantities. The news comes from UBS Research’s Q1 preview on GT Advanced Technologies, the company that Apple has partnered with to open a sapphire plant producing the material expected to replace Corning’s Gorilla Glass on the next-generation iPhone display.

Checks find GT’s Arizona factory likely stared producing sapphire last month. Our own checks found that for the first time GT shipped some small quantities of sapphire made in its Arizona fab to one of Apple’s partners in China who is in charge of making sapphire covers. Our checks find the amount of ingots it sold into China last month was only about 2,200kg which would be in line with our estimate of about 100 sapphire furnaces turned on and running (our checks find 100 furnaces were targeted for installation in 4Q13). We believe GT is still on schedule in Arizona, where we estimate GT was to install another 400-500 sapphire furnaces in 1Q14 and 900-1,000 in 2Q14. GT confirmed last week that it received a 3rd prepayment from Apple recently (we estimate the 4th and last prepayment will be made in May) which also gives us confidence that its Arizona sapphire factory for Apple is tracking on schedule.

We previously reported that, based on research into shipping documents, we expected Apple and GT-Advanced were developing sapphire crystal display covers— not sapphire for the home button and camera used in current models— for a next-generation iPhone.

Analyst Matt Margolis estimated today that “approximately 100,000 to 115,000 sapphire screens could be produced from 2,200 kg of sapphire ingots” quoted by UBS, and using their info estimated GT would sell the sapphire screens for between $8.50 and $10. The first small shipment sent from GT Advanced to Apple suppliers was worth around $1 million. He also estimated that the facility will be at full capacity sooner than UBS noted above in its report, noting that most furnaces were delivered between December and February.

In its report, UBS noted “GT’s sales of sapphire to this partner in China last month was priced about 25% lower than sapphire sold by Apple’s other sapphire suppliers for covering the home button and the camera.” It estimated GT Advanced could set its guidance for 2014 at $600M-$800M with approximately 80% sales from sapphire to Apple and partners.

Earlier this year we reported that GT Advanced and Apple had acquired enough equipment to produce as many as 100 million or more displays a year for the rumored approximately 5-inch next-generation iPhone.