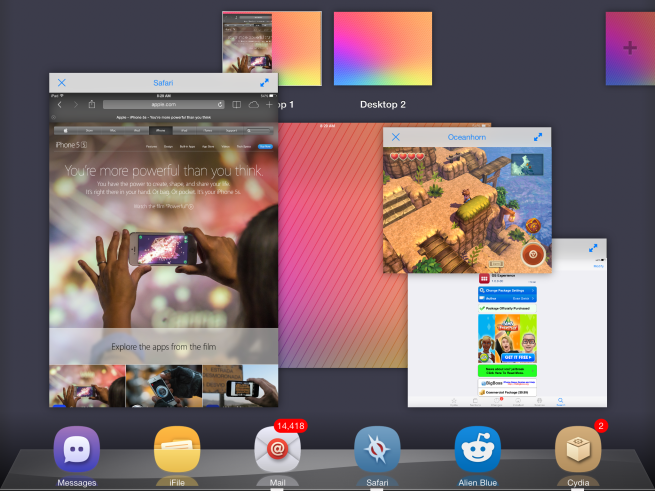 OS Experience is a new jailbreak tweak for iPad that adds an extensive OS X experience to iOS. This tweak has been in development for quite some time and was actually announced before the iOS 7 jailbreak was released. Since then, the developer has been hard at work perfecting OS Experience to be the ultimate multitasking tweak for iOS. It’s very similar to an older discontinued tweak called Quasar, but this one takes multitasking on iPad to another level.

There’s quite a bit involved with this tweak, but everything seems to take on a native flow. OS Experience offers the ability to have multiple “desktop” configurations (up to five) with native apps running in a windowed mode. The tweak’s functionality does rely on multi-touch gestures that can sometimes feel a bit awkward, but they definitely get the job done.

When using an app, you can swipe down with four fingers to access OS Experience’s implemented menu bar for any app. Here you’ll have the ability to close the app completely or minimize it into a window on one of the predefined desktops. When the app is in a window, you can resize it, close it, and also drag it along the side to snap it to half of the screen. Using the “snap” feature, you’ll be able to effectively run two apps side-by-side at the same time. Pretty nifty.

Here’s an in-depth video review of OS Experience (via iTwe4kz):

At any time a five-finger pinch/swipe will take you back to the system-default home screen with all of your icons, while another one will take you back into OS Experience’s default setup. The custom desktop configurations can be accessed with swipe gestures and windowed apps can be added each desktop with a simple tap and drag of the finger.

On the downside, OS Experience will completely replace the default app switcher in iOS 7, so if you’re a fan of having classic features this may not be for you. Along with that, at the moment you don’t have the ability to access Control Center. This tweak is rather new, and while I’m not sure of the technical restrictions, it may be something that can be fixed in a future update. Regardless of its limitations, OS Experience is certainly an interesting addition to jailbroken iPads.

Overall, this is a hefty feature-packed jailbreak tweak, but as mentioned in the video above, there is a bit of a learning curve. If you’ve used a Mac, there’s a good chance that you’re familiar with the desktop capabilities of OS Experience. It’s not for everyone, but true multitaskers will appreciate the level of complexity that this tweak offers. Check out the video above for a detailed look at this new jailbreak tweak. Currently, OS Experience is available in Cydia’s BigBoss repo for $9.99 and compatible with iPad.