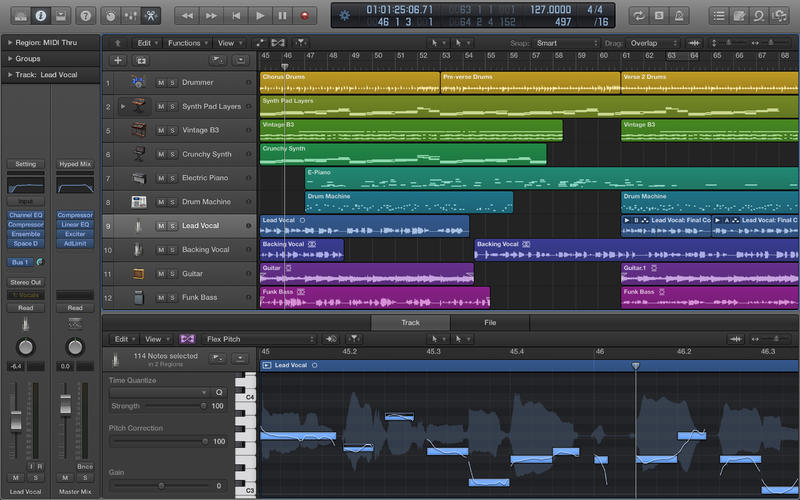 Logic Pro X has been updated today with a number of bug fixes and improvements. First on the list of changes is better support for 12-core Mac Pros, which can now utilize up to 24 threads at once. Fixes to step sequencer issues when using Low Latency Mode and alignment guides have been implemented, and several XML import and export bugs have been taken care of.

A few extra enhancements also appear in this update: You can now copy automation data and paste it to any location using the Marquee tool; MIDI devices with volume and pan controls can now be set to control the software instrument rather than the channel strip the instrument is recorded on; and volume, pan, and effect send values can now be inserted into the automation track at the current playhead position.

There are also upgrades to the app’s accessiblity features. You can grab the update for free if you already own Logic Pro X. The app is $199.99 for new users on the App Store.

• Now supports 24 processing threads on 12-core Mac Pro models
• The current volume, pan, and send values for all selected tracks can now be inserted at the playhead position
• Enabling Low Latency Mode no longer creates sync issues for Drummer, Ultrabeat, Native Instruments Machine and other plug-ins with integrated step sequencers
• Automation can now be copied and pasted to any location using the Marquee tool
• Adds an option for MIDI volume and pan data to control the instrument plug-in instead of the channel strip
• Resolves several snap and alignment guide issues
• Various fixes that improve XML import and export with Final Cut Pro X
• Contains multiple enhancements to Accessibility