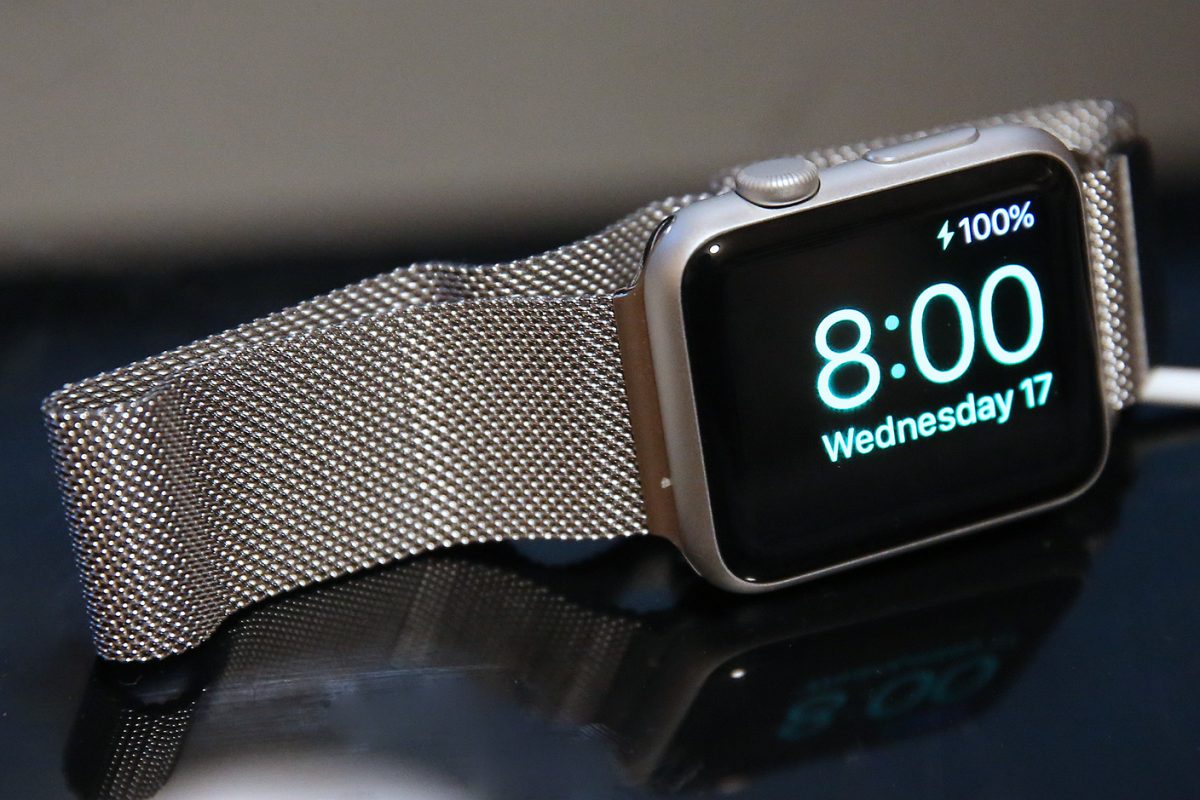 Compare iOS/iPhone OS 1.0 with iOS 9.0, and you’ll see that the similarities are incredible — Apple had the right formula on day one, and just kept tweaking it over time. But try the same exercise with the Apple TV and you’ll see plenty of major changes, since a series of annual UI refreshes took years to settle on the interface we know today. Ditto with the iPod nano, which went through several major UI iterations as it shifted from Click Wheel to touchscreen interfaces. The lesson: Apple normally gets a lot more right than not, but isn’t afraid to make major UI changes if they improve the user experience.

Although some of the Apple Watch UI elements appear to be locked in place — such as the Home Screen with a grid of unlabeled circular icons — other parts of watchOS are clearly being changed for the better. For instance, watchOS 2 introduces Nightstand mode, which lets the Apple Watch continue to serve as a timepiece when it’s charging next to your bed. Nightstand mode is a nice feature, and might replace your bedside alarm clock, assuming that you’re willing to turn your Apple Watch into landscape mode to use it. But there are several ways that it could be better, and I’d like to know whether some of the possibilities appeal to you as much as they do to me…

How Does Nightstand Mode Work?

Currently, Nightstand mode has zero configurability: it’s either on or off, a single switch adjustable in iOS 9’s Apple Watch settings or on a watchOS 2-equipped Apple Watch itself. When it’s on, you’ll typically see a battery indicator in the upper right corner, a large digital clock with a pulsing colon, and the day of week and day of month. 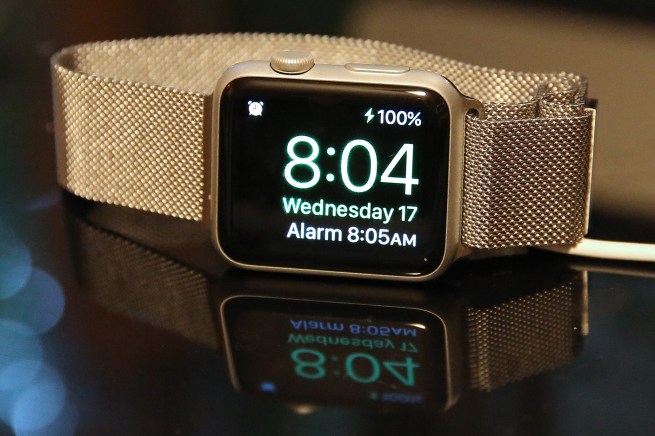 If you set an alarm, you’ll also see an alarm icon in the upper left corner, plus an additional line of text at the bottom of the screen noting that an alarm has been set for a specific time. (Note that the iconography differs a little from the way the screen looks on Apple’s watchOS 2 preview page.) When the alarm goes off, the screen changes, and a chime can be heard through the Watch’s integrated speaker. 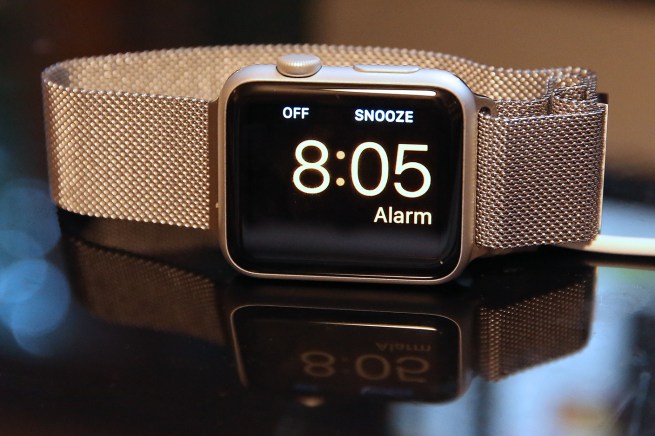 If you press a “Snooze” button, you return to the Nightstand clock face, where the alarm line of text becomes orange and reads “Snoozing” with a 9-minute countdown timer. 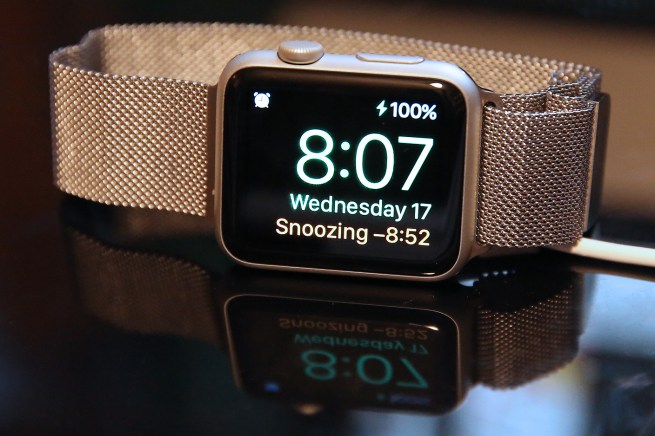 Force Touching the screen in Nightstand mode currently doesn’t let you change a thing about its appearance or functionality; it just bounces back to acknowledge the Force Touch without doing anything. Since watchOS 2 is still unfinished, presumably with 6 or 7 subsequent betas yet to go before it becomes final in the fall, there’s plenty of time left to improve Nightstand mode before it’s released. 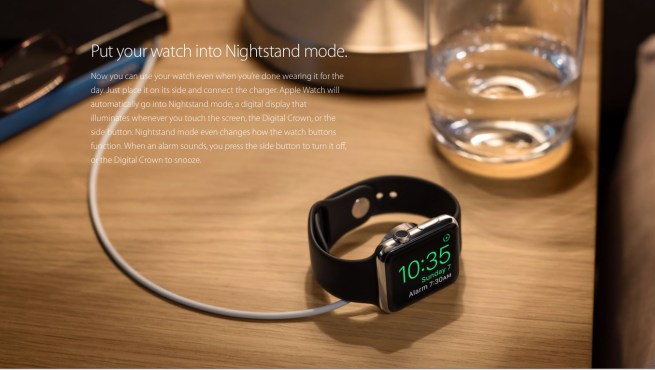 Apple’s premise for Nightstand mode is simple: “Now you can use your watch even when you’re done wearing it for the day. Just place it on its side and connect the charger.” The photo on Apple’s web site shows a steel Apple Watch resting gently on its edge atop a wooden nightstand. Perhaps not surprisingly, the gold Apple Watch Edition’s special charging case is nowhere in sight, nor are any of the affordable Apple Watch docks and stands people are already buying and loving. 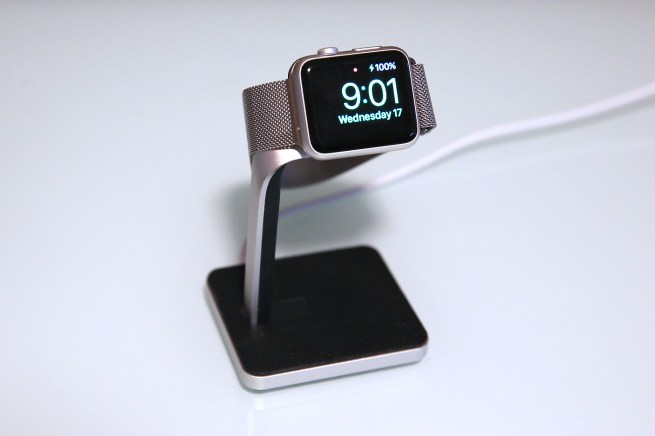 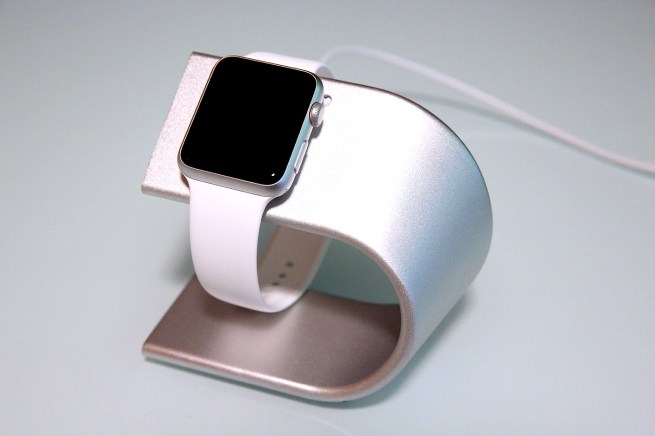 Apple could ignore users who prefer to keep their watches in portrait orientation. But a better alternative would be to add portrait support to Nightstand mode. Hardware button access to disabling the alarm or initiating snooze mode could remain the same as in landscape mode. But tapping on the screen for these features is already supported by watchOS for regular alarms, and would be a fine UI alternative here.

There’s also already precedent in watchOS for an “X-Large” digital watch display, demonstrating that with a little font size tweaking to make room for other basic elements — the battery indicator and alarm text — the Nightstand feature could be altered to support the second orientation. 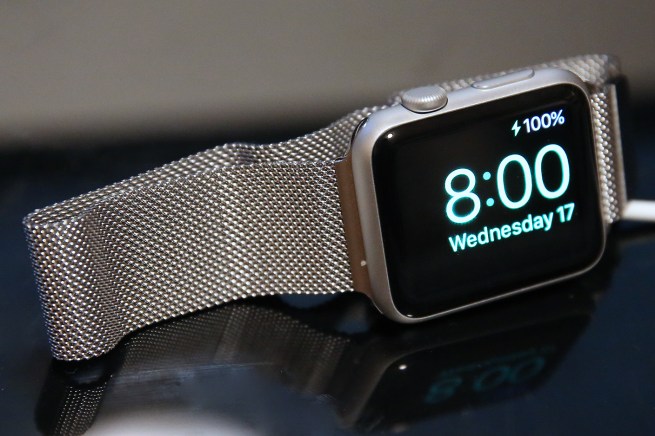 Another fairly easy tweak for watchOS 2 would be brightness, color and complication adjustability for the UI elements. You might prefer to wake up to a dimmer clock face, or one in a color other than the bright green and white tones that Apple has picked. It would also be nice to be able to swap the days of week and month for a notification panel. Different people will have different opinions on how important each of these small changes would be to the Nightstand experience; many people view granular dimmer settings as critical for a bedside clock, and would prefer to have more control over the clock’s appearance than the current on/off setting. 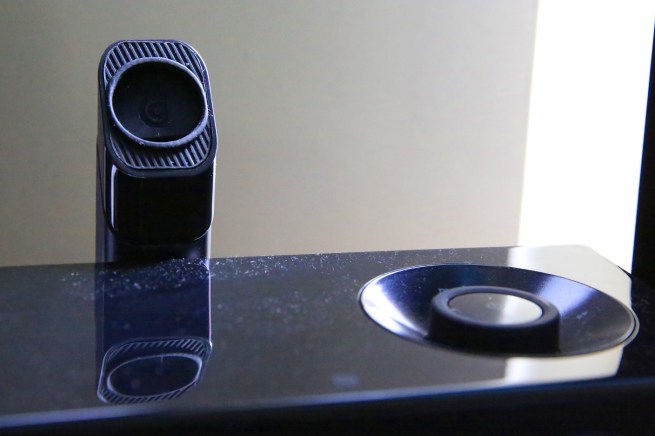 iHome’s classic iH5 effectively defined clock radios for the iPod generation, but despite the growing screens and capabilities of iPods, iPhones, and iPads, Apple never developed a special Nightstand mode-like feature to embrace their value as bedside clocks. As a result, iPhone and especially iPad alarm clock docks kept trying to figure out the right way to dock and integrate with Apple device shapes that weren’t necessarily easy to complement.

Since the Apple Watch is billed as “an incredibly precise timepiece,” it would just make sense to pair with a Bluetooth speaker dock to become a full-fledged alarm clock. Apple could aid this process by expanding Nightstand mode to include OS-level support for sounding alarms through external speakers, automatically streaming stored music to the docking device, and other “seamless integration” software hooks. It would be cool to see what developers could do with an Apple Watch-based speaker dock… and I wouldn’t be surprised to hear that Apple and the Beats team are already working on one.

What would you like to see Apple do with Nightstand mode? Share your thoughts in the comments section below!

Check out more of my opinion pieces, How-To guides, and reviews for 9to5Mac here! I’ve covered a lot of different topics of interest to Mac, iPad, iPhone, iPod, Apple TV, and Apple Watch users. Don’t forget to click on Older Posts at the bottom of the page to see everything.