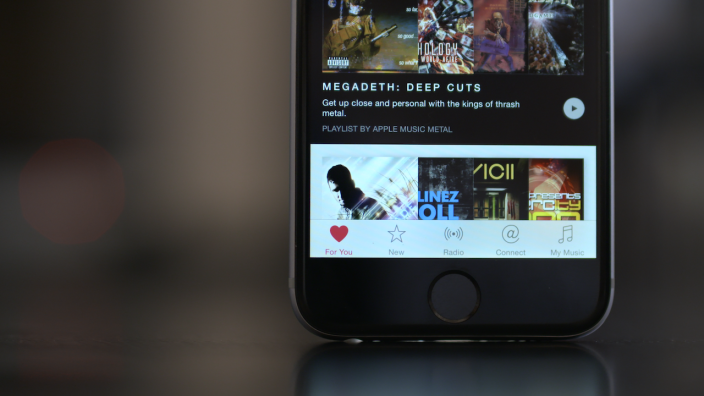 Today we’re taking a quick look at Apple Music. This new service came along with the iOS 8.4 update and effectively merges Beats Music with a new streaming service from Apple. The good news is, Apple Music will also be available for Android and Apple TV as well later this fall. Everyone also gets a 3 month free trial in case you’re on the fence about subscribing to the service right away…

The update brings along a refreshed Music app icon and this is where you’ll find Apple Music along with the music you’ve purchased through iTunes. Inside of the app we have a new layout with different tabs and organization. When you first sign up for Apple Music, you’ll be prompted to choose different genres and artists that you like. This will begin curating playlists and albums for streaming based on your interests.

The first tab at the bottom is where you’ll find music “for you.” These playlists, artists, and albums are available to stream instantly, add to your music library, and even save for offline playback. If you’d like to find other artists available on Apple Music or within your music library, you can tap on the search icon in the top right corner and type in an artist, song, or album name.

Next up, we have the “new” tab which will likely be similar for everyone using the app. This presents artists and albums new to Apple Music and can be streamed or saved to your library.

Check out our Apple Music hands-on video below:

In the middle, there’s a “radio” tab. This is basically what iTunes Radio should have been from the beginning. At the moment, the top banner showcases Beats 1 Radio which is a live station that has different scheduled events throughout the day. By tapping on this station you can see the current DJ lineup and featured shows that air on this station. The other stations available are pretty straight forward though. Tap on a station and it will begin playing content based on the title.

The fourth tab is called “connect” and works as somewhat of a social network for Apple Music. This allows you to follow various artists and see what’s happening in a single stream. You have the ability to like posts and comment on them with others that are into that artist as well. By default, Apple Music will follow artists it finds within your music library, but you can easily follow new artists through their personal pages or access them through a specific album.

Apple Music is exactly what I’ve been waiting for and I’m looking forward to its release on Apple TV and Android in the near future. If you’d like to sign up for Apple Music after the free trial has ended, it will run you $9.99 per month for an individual or $14.99 per month for a family of up to 6 members with individual accounts and listening preferences. It seems like a pretty good deal to me, but let us know what you think about Apple Music in the comment section below.