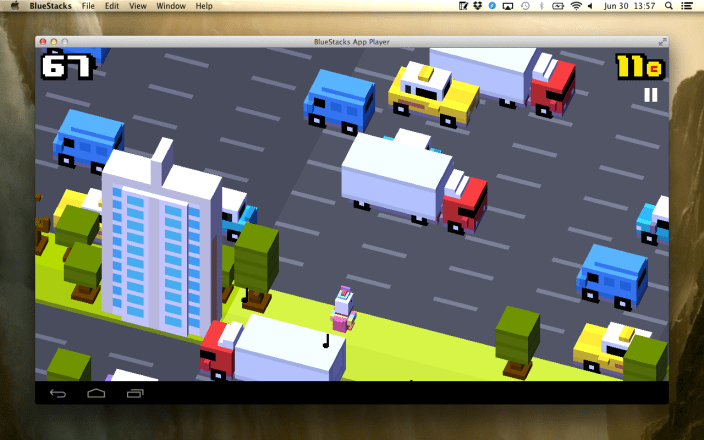 BlueStacks, a free desktop Android emulator that lets users play any mobile game or app on the big screen with a mouse and keyboard, has mostly been limited to PC users until today. But Mac users are about to get access to the software that the company says already has around 90 million users on Windows.

While the app arrived briefly as an alpha release of Mac users back in 2012, this morning the company is launching an official release of the popular BlueStacks App Player software for Mac for the first time, allowing Mac users to play mobile games and use their favorite apps from mobile on the desktop. The company told us that it’s worked hard to optimize BlueStacks for Mac to take advantage of all the benefits of a larger Retina display and using touch gestures on Apple’s trackpads.

“Mac OS is a top notch platform and we worked hard to take advantage of everything it has to offer,” said BlueStacks Principal Software Architect David Reese. “From pinch to zoom on the trackpad to its retina display we optimized for everything.”

BlueStacks is capable of running x86-based and ARM-based apps, supports Android TV apps, and offers the ability to share files and content from desktop to mobile through syncing features. Users can download Android apps from Google Play in the same way they would on an Android device. Here’s a look at the app in action (click for full-size):

In addition to trackpad and Retina display support for Macs, it also offers microphone, sensor and camera integration, and native graphics support for running even the most graphically intensive games.

In case you’re unfamiliar with BlueStacks, the company has backing from notable investors including Intel, Andreessen-Horowitz, Qualcomm, and AMD, and also has a few OEMs preloading the software for users including Lenovo, Asus, and MSI.

The BlueStacks App Player for Mac is available to download for free from the company’s site today.