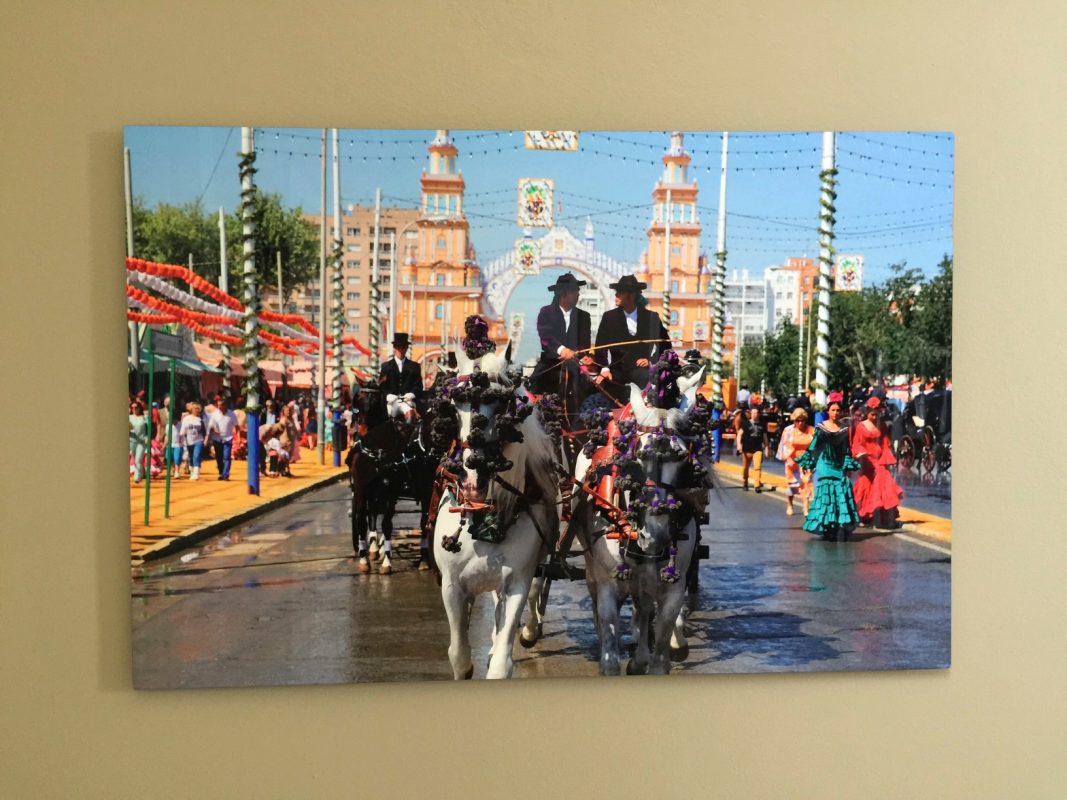 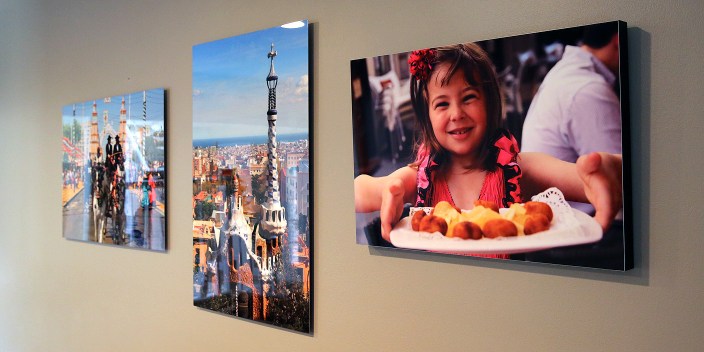 Apple knew it had something special to share with the world when it released iPhoto in 2002: in addition to printing 20″ by 30″ poster-sized photos, the original iPhoto’s “most stunning feature” (according to Apple) was a page layout tool that quickly turned digital photo collections into printed hardcover books. These were Apple’s acknowledgements that tangible photos still had value in a digital era, and it subsequently added calendars, greeting cards, softcover books, and letterpress cards to iPhoto. Apple’s newer app Photos for Mac hides these options under the File menu at the top of the screen, and hasn’t expanded on them, a shame considering how nice the results look.

But apart from including the poster options in 2002, Apple never added “large-format art” to the list of things its photo apps could produce. Back in 2002, digital cameras were so low-resolution that they struggled to produce pixel-free 4″ by 6″ photos, so it’s no surprise that Apple wasn’t trying to build a market for large prints. Thankfully, a lot has changed since then. Canon currently sells two 50-Megapixel cameras, Sony has one 42-Megapixel camera, and Nikon offers four 36-Megapixel cameras. iPhones and iPads can create up to 43-Megapixel ultra-wide panoramas. A large, properly-composed print from any of these cameras (or even the more common 20- to 25-Megapixel cameras people are using today) will look amazing hanging on the wall of your home or office… if you know how to do it.

I wanted to see what the best options were for large-format photography, so I reached out to a collection of excellent art print services to see how digital photos would look on metal, glass, and canvas — materials Photos doesn’t offer. In Part 1 of this How-To guide, I’m looking at large-format metal prints that apply dyes and gloss directly onto aluminum surfaces, with results as saturated as Apple’s famous “nanochromatic” iPod nanos. A new Part 2 looks at large-format canvas and glass prints. Read on for all the details…

When you research the world of metal photo printing, two names come up repeatedly. First is Image Wizards in North Carolina, which lays claim to having invented metal photo prints, as well as ubiquitous earlier ideas such as printing photos on coffee mugs and mouse pads. Image Wizards’ AluminArte is considered the gold standard for metal photo printing, and can be produced in sizes ranging from 12″ by 20″ to 48″ by 96″ ($130 to $1,030) — that’s four by eight feet, a surface large enough to make a life-sized print of a basketball player (with room on the edges to spare). You get the choice of four different finishes – white aluminum or brushed in your choice of satin or gloss – plus three different types of frames in your choice of three colors. 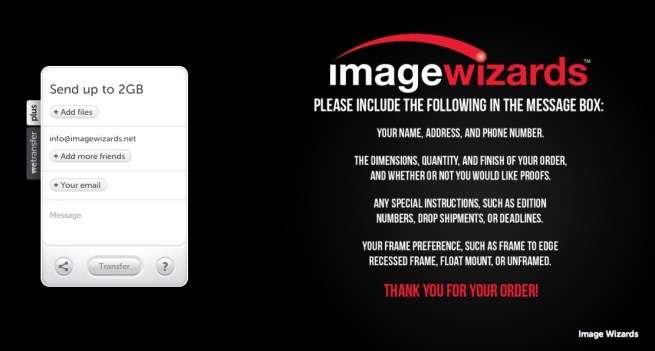 Image Wizards offers a lot of different customization options, but its web site is very basic. You specify your choice of sizes, finishes, frames, and shipping packaging, then provide your shipping and billing information. Next, you just upload your file to the company without any additional site-based adjustment or previewing of the image. Consequently, you’ll need to do your cropping in Photos, iPhoto or Aperture, and make sure that your image looks right before uploading it. My finished Image Wizards print was very slightly cropped on the left side relative to the original image.

Image Wizards’ 24″ by 18″ version is slightly cropped, but richly colored (glare is from the glossy finish)

I was pleased by the quality of the Image Wizards print, and super impressed by the company’s frame. The AluminArte process preserved all of the original image’s rich saturation, which pops nearly as much on the 24″ by 18″ frame as on the internally illuminated, comparably-sized screen of a 27″ iMac. An anti-scratch coating provides HDTV-like gloss, and is capable of resisting finger gouges; Image Wizards includes a large cleaning cloth to preserve the shine. Additionally, although I’d selected a floating frame, Image Wizards recommended a frame to edge version that considerably stiffened the edges of the thin aluminum print, providing black boxy edges and a measure of reinforcement against accidental damage. It was a great recommendation, though it added $78 to what would otherwise be a $145.65 price. 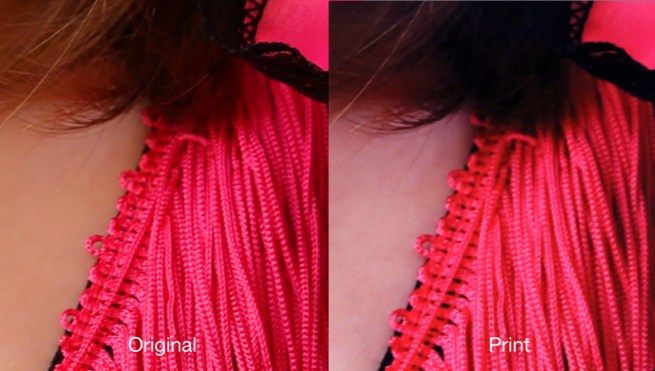 As shown above, the detail level in the AluminArte print is pretty impressive for a large piece of wall art, preserving even the individual textures of strings in the original 24-megapixel photo. There were small color differences — smaller than the comparison here suggests — which aren’t noticeable unless you hold the image directly up next to a monitor. While the AluminArte print wasn’t as large as the others I tested, and I didn’t have a 50-Megapixel Canon to push the outer limits of the company’s process, most DSLR users (and many point-and-shoot photographers) can expect similarly detailed, beautiful results even at slightly larger sizes. 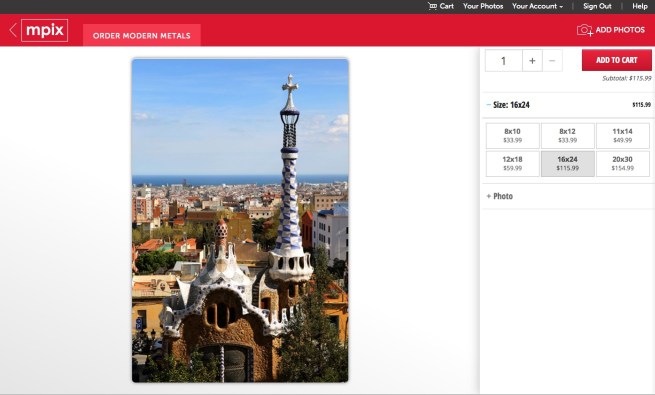 Another widely recommended metal print resource is Mpix, a division of Miller’s Professional Imaging in Kansas. Mpix does a lot of different types of photo printing, including canvas gallery wraps and boxy “standout” photos. But it also offers Modern Metals, aluminum prints that range from 8″ by 10″ to 20″ by 30″ ($34-$155). The prices are aggressive, though as a trade-off, you’ll have no physical options beyond choosing the size. You can use the Mpix web site to adjust the zoom, cropping, and rotation of your image, optionally adding various facial retouching services for $8 per retouching service per person; that’s it.

Mpix’s prints arrived amazingly quickly after my order was placed, and I was thrilled with their value for the dollar. Once again, the saturation and detail on the prints were spot-on with the original images, making colorful images really pop. I was astonished that buildings in the distance were as clear in the Mpix prints as in the Canon 5D Mark III images I shot, and that I needed to magnify the originals to absurd levels to find pixel-level distinctions. The only comparative issue I ultimately noted was a slight blow out of bright spots, which in all honesty affected such tiny parts of the huge images that they were hard to spot.

Fine details remain obvious in the print, though bright spots sometimes get a little blown out

Mpix notably offers 30″ by 20″ metal prints for $155, a roughly 36″ diagonal that’s larger than the display of any current or past Mac. While that’s not as large as the biggest Image Wizards print, Mpix’s options tend to be somewhat less expensive at given sizes. Part of that price difference is because there are fewer frills here than with Image Wizards, as Mpix doesn’t include a cleaning cloth or offer multiple frame or finish options. However, the frameless mount is sturdy and works exactly as expected, providing three mounting points in a line. Moreover, just like with the Image Wizards prints, Mpix’s prints were finished with a glossy surface treatment that made them look like UHDTV screens – really beautiful.

If you’re looking to make giant, wall-worthy metal art prints from your digital photographs, Image Wizards and Mpix both have advantages worth considering. The multiple finish and framing options offered by Image Wizards are good premium touches, while its ability to produce human-sized aluminum canvases for your photos could completely wow viewers with scale alone. By contrast, Mpix’s simpler options and pricing still deliver surprisingly strong image quality, and make an impact with the option of larger-than-Mac-sized prints. You won’t be disappointed with either company’s products.

Part 2 of this article is now available with glass and canvas options, and you can check out more of my How-To guides and reviews for 9to5Mac here! I’ve covered a lot of different topics of interest to Mac, iPad, iPhone, iPod, Apple TV, and Apple Watch users. Don’t forget to click on Older Posts at the bottom of the page to see everything!