Opinion: Will size alone be enough to sell a bigger iPad? 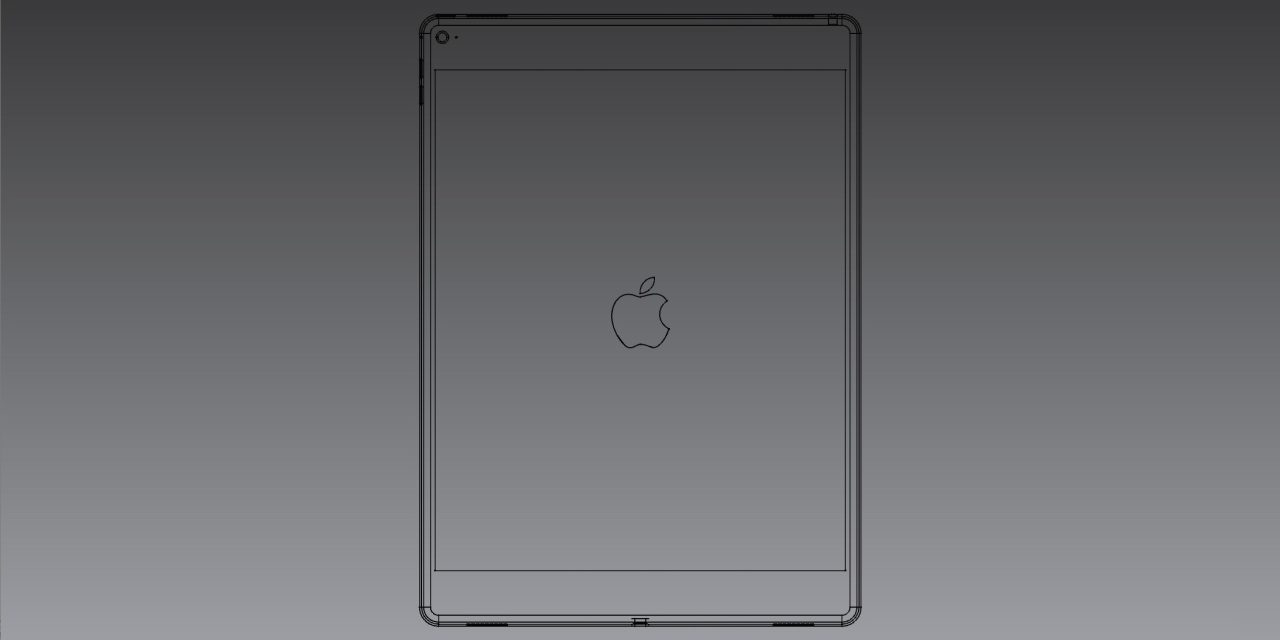 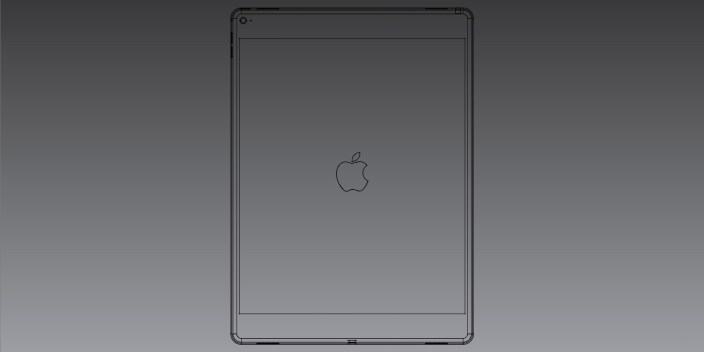 There isn’t any question that Apple’s working on a larger-screened iPad: early details leaked in 2013 and have been followed by dimensional drawings and prototype shells over the past year. All of the leaks suggest that the “iPad Pro” or “iPad Plus” will be nearly identical to the iPad Air 2, except with an almost 13″ screen and four (rather than two) speaker grilles. Few of the leaks have suggested major new design elements, such as an extra connector port, an integrated stand, or a stylus; no one believes Apple will even rotate the rear logo to signify a preferred horizontal orientation. In short, the “iPad Pro” will likely be a bigger-screened iPad Air, much as the iPad Air was just a bigger version of the iPad mini that preceded it.

Despite once-credible reports of an early 2015 release, the big iPad was apparently pushed back at least twice so Apple could focus on making more iPhones. Since it’s supposedly been rescheduled for a fall release, I wanted to pose a question: given what we (think we) know about it, do you believe a bigger-screened iPad without other major design changes will be compelling enough to succeed?…

What is “known” about the hardware?

Leaks have more or less established several of the big iPad’s key physical characteristics. First, it’s believed to be roughly 8.6″ wide by 11.9″ tall, with the same basic shape of the iPad Air 2. Second, the screen is almost certainly larger than 12″ and smaller than 13″ on the diagonal. Third, the locations of ports, buttons, and other elements are apparently staying the same from iPad mini to Air to Pro.

Apple has apparently tested everything from 12.2″ to 12.9″ displays, but reports have differed on the final size and resolution of the display. Code recently found in iOS 9 suggests that the resolution will be 2732 by 2048, which at 12.9″ would have an equal pixel density to the iPad Air. However, 3-D models with dimensions matching leaked body dimensions suggest that the display could be closer to 12.7″. As shown in the rendering above, if Apple preserves the same 4:3 screen aspect ratio as all earlier iPads, the front of the new iPad would need to have extremely thin left and right bezels with a 12.7″ screen — even thinner than ones on the iPad Air. The FaceTime camera would have to be in the same position as on earlier iPads, above the portrait orientation screen, with equal space for a Home button below the screen.

As such, while the screen will be roughly comparable to the one on the 12″ Retina MacBook, it will be different in that its primary intended orientation will be portrait rather than landscape, and it will be less wide when laid on its side. If Apple wanted to change this usage scenario to make the big iPad more Mac-like, it would need to change both the shape of the iPad and the location of its key front- and bottom-facing components. 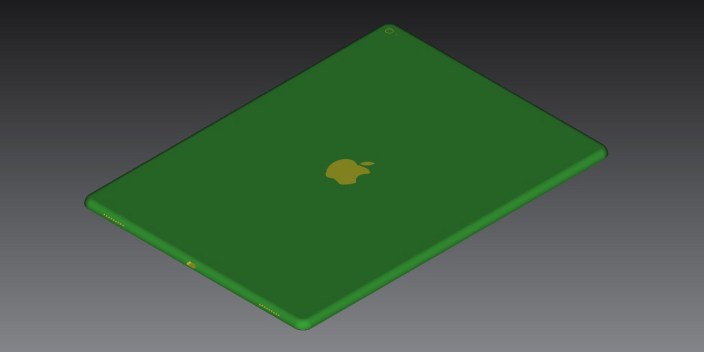 Instead, Apple is apparently adding two additional speakers to the unit’s top, which will likely enable the new iPad to perform stereo audio in either portrait or landscape orientation, switching speaker outputs based on the way the iPad’s being held. Case makers have produced prototype cases that feature an extra hole on one of the long edges, potentially for SIM card access, possibly for a second connector port. The Wall Street Journal claimed that Apple was considering adding a USB-C port to the new iPad to improve support for computer peripherals, and dummy models have shown how it would look. But there’s no other evidence that an extra port — USB-C or Lightning — will make it into the final device. Given that the 12″ MacBook shipped with a single port, it may well be wishful thinking. 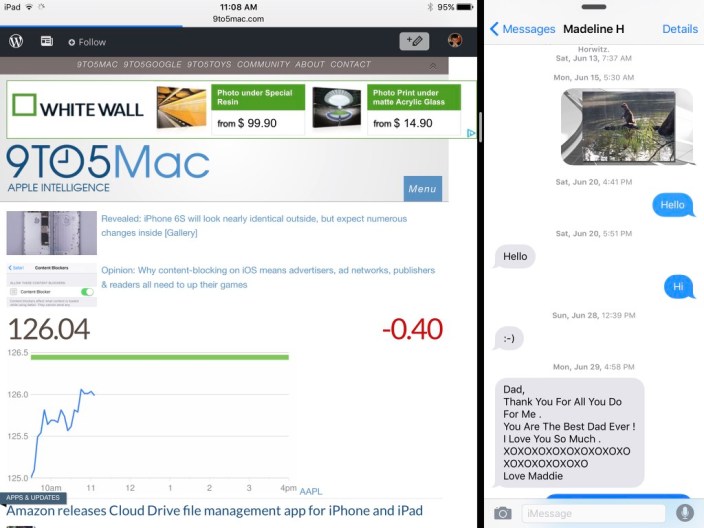 What is “known” about the software?

iOS 9 is clearly being designed with an eye towards larger iPads. Most notably, it adds support for split-screen iOS applications that dynamically adjust their sizes to fit smaller and larger windows. Apple set the stage for the feature by introducing iOS features such as auto layout before officially debuting split-screen multitasking in iOS 9 last month. As valuable as split-screen support is for iPad Airs (and “nice” as it is for iPad minis), it would basically be mandatory for larger-screened iPads. Running only one app on a nearly 10″ screen often doesn’t feel like a good use of space; as shown on the 13″ MacBook Pro screen below, even running only two apps on a 12″ or larger screen seems wasteful. 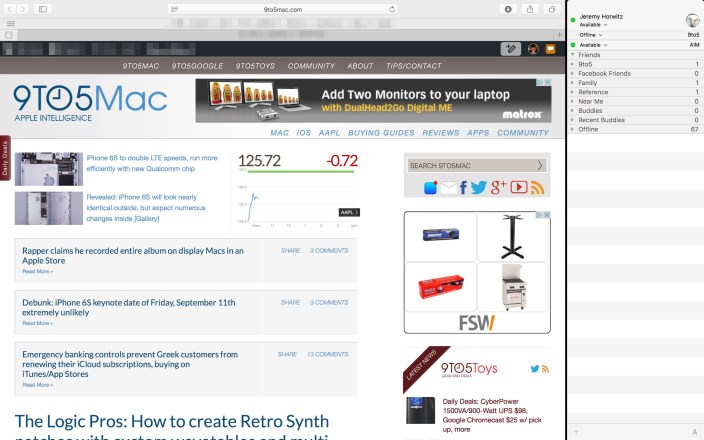 Apple has been priming Mac users for an iOS-like working environment by introducing a full-screen mode in OS X Lion, which enabled one app to take over the entire display like an iPad. This year, it introduced a split-screen mode for OS X El Capitan akin to the same feature in iOS 9. Personally, I’ve never found OS X’s full-screen mode compelling on even the smallest-screened MacBook Air, and El Capitan’s split-screen mode isn’t better in any way than just using normal Mac windows. Going full-screen or two-pane becomes increasingly ridiculous as screen sizes increase, but it’s as close as Apple can come to bridging the obvious divide between iOS’s and OS X’s capabilities.

It appears highly unlikely that Apple will allow the big iPad to run OS X, although there’s mounting evidence that the processing capabilities of high-end iPads and low-end Macs will begin to overlap this year. The hardware differences between an entry-level 1.1GHz 12″ Retina MacBook and sub-13″ iPad Pro may well come down to their different philosophies on storage capacity, RAM, keyboards, trackpads, and touchscreens rather than CPUs and GPUs. And who knows what will happen with iOS 10 (or… iOS X) in 2016?

Who will this iPad be for?

Conventional wisdom suggests that the big iPad will be pitched at two categories of customers — creatives and enterprises — because the screen size will be roughly equivalent to the usable area of an 8.5″ by 11″ piece of paper. But it’s also possible that Apple will market it to potential Windows PC switchers who have held off on going Apple until now, as well as to educational institutions.

Will you want one?

That’s up to you — previous polls we’ve run have suggested that roughly half of our readers are at least open-minded about the value of larger-screened iPads, and some people are actively looking forward to buying them. Share your thoughts below!