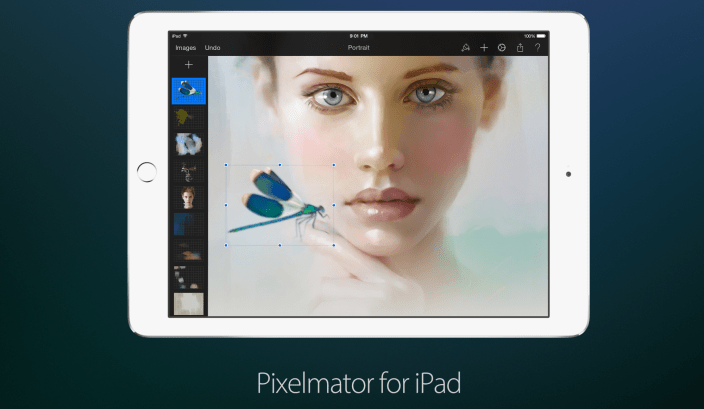 Pixelmator for iPhone and iPad has today been updated to version 2.0.2 bringing even more features to the popular image editor for iOS and Mac. This update adds a new kind of brush stroke called Dynamic Touch, which simulates pressure sensitivity by examining the size of the finger input that touches the screen. Larger surface area produces thicker strokes on the canvas. Similarly, using just the tip of a finger results in fine lines in the app.

The update also ports the revamped Repair tool from the desktop version of Pixelmator to the iOS app. Repair allows users to quickly scrub out unwanted elements of a scene. The company says the feature is now five times faster and even more precise with this iteration. Pixelmator 2.0.2 also includes improvements to the Photo Editing extension, which now enables users to apply Pixelmator photo effects from within the native Photos app editing interface. In addition to these main features, there are a bunch of minor enhancements:

• The Blur effect lets you apply more blur to your images.
• We’ve enhanced the look of the Pinch and Bump effects, so now they look even better.
• The Effects preview thumbnails of very wide images were too wide. Fixed.
• Now you can Cancel or Apply an effect with the settings popover open.
• The Clone tool now starts cloning grouped layers when and where you ask it to.
• The Retouch tools now work just as they should on layers with Lock Alpha on.
• The rhombus shape looks much more crisp.
• The Font Size setting had no effect on a few fonts. Fixed.
• The values of the Color Balance settings used to stay the same after applying Undo. Fixed.
• Previously, after canceling color adjustments for text, shape or grouped layers, you were still able to Undo the adjustments that you never made. Fixed.
• Removed Undo Image Size after creating a new Custom Image.
• The Replace Photo popover is now displayed properly when customizing a template at a high zoom level.
• We’ve made it easier to zoom the canvas into Fit and Full-Screen views.
• Your canvas now also fits the screen nicely after rotating the device with the Tools popover open.
• Browsing the Image Gallery is easier, when you can start swiping from the Name or Date labels, too.
• Images copied from Messages and other text-based apps are now pasted properly.
• Shapes with gradients created with Pixelmator for iOS look just the same on Pixelmator for Mac.
• Now you can see Pixelmator document thumbnails in the iCloud Drive Document Picker.
• Once in a while, the Photo Editing extension used to stop responding while saving changes. We found the reason and fixed it.
• The Photo Editing extension used to save the changes you made, even if you made no changes. Fixed.
• The app used to quit unexpectedly when you tried to enter Effects while editing a very wide image. Not anymore.
• We’ve improved the stability of the app when opening PSD documents with custom fonts.
• The Low Disk Space alert is now displayed only when you launch the app.
• Once in a while, the app used to stop responding after running in the background. Not anymore.
• The app would sometimes stop responding when opening an image from another app or via Handoff. We fixed this.

• We’ve updated to the latest Adonit stylus SDK for a better painting experience.
• Replaced the Brush Tool and Eraser Tool stylus shortcut options with one Toggle Eraser option.
• Fixed an issue with Stylus Shortcuts, which sometimes used to perform two actions at the same time.
• First Writing Style was available but non-selectable. Fixed.

As a companion, the Pixelmator team is also releasing a set of user guides to explain to new users how to use the rich variety of functionality available. You can download guides for both iPhone and iPad for free from iBooks. You can also watch a series of video tutorials on the Pixelmator website.