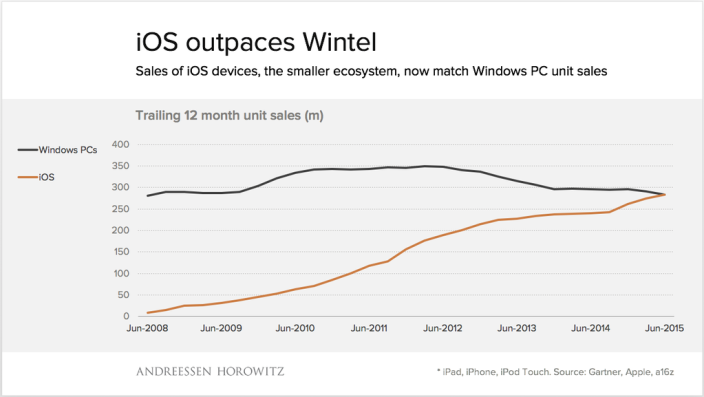 Apple earlier today reported its Q3 2015 earnings, and while the company’s stock has taken an after-hours dive, the numbers were generally strong. Apple reported that it had sold 47 million iPhone units and 10.9 million iPad units in the quarter, combining for a total of 57.9 million iOS devices, not including the iPod touch. As noted by Benedict Evans of a16z, Apple’s sales last quarter mean that iOS sales are now matching those of Windows PCs.

As you can see in the chart above, sales of Apple’s iOS devices have grown rapidly since June of 2008, with year-over-year growth occurring every year. For Windows PCs, however, sales peaked around June 2011 and have been slowly declining every year since then. For the trailing 12 months into June 2015, sales of both iOS devices and Windows PCs were slightly under 300 million units each.

Evans also notes, however, that Android unit sales passed Windows PCs back in March of 2012. The PC install base is around 1.5 billion devices and Android has already passed that and should iOS continue growing at the rate it is, it could also pass that 1.5 billion unit number.

Apple reported revenue of $49 billion for Q3 2015 and $10.7 billion in profit. While sales of iPhones missed analyst expectations, the company still saw strong year-over-year growth. More numbers can be found here and in our live blog of the company’s earnings call.

Android unit sales, of course, passed Windows PCs back in March 2012. Mobile is a bigger ecosystem than PCs. Much bigger.