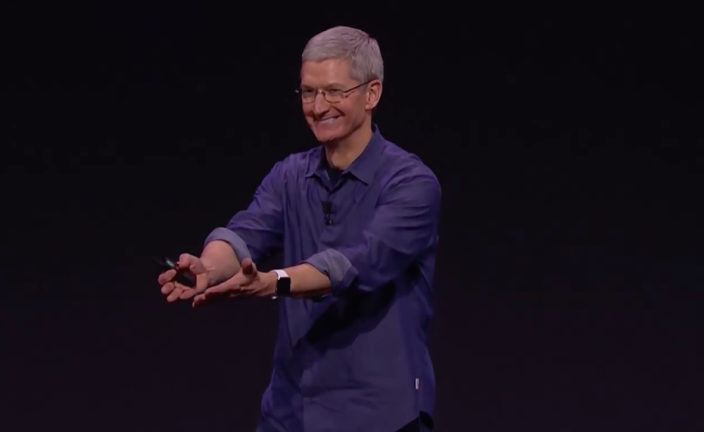 Apple isn’t breaking out Apple Watch sales or revenue during today’s fiscal third quarter earnings report (the three month period that ended in June). While that’s not a surprise— Apple said previously it wouldn’t disclose Apple Watch numbers for competitive reasons— today we did get our first official glimpse at how the Apple Watch sold during its launch. The math plus some hints from Tim Cook himself hints that Apple Watch sold over $1.4 billion in revenue:

Apple groups Apple Watch revenue into its Other category in its report, which also includes sales of Apple TV, Apple Watch, Beats Electronics, iPod and Apple-branded and third-party accessories (as well as deferrals and amortization of related non-software services and software upgrade rights.) For the third quarter, it reported $2.6 billion in revenue for the Other category, up 56% sequentially. Since this is the first report to include Apple Watch in the category, we can start to get an idea of how much Apple Watch sold. While it’s not a given that the 56% growth is all Apple Watch since some other products in the category could have grown during the quarter, Tim Cook himself hinted that it’s actually higher than that number, not lower.

When asked about Watch sales during the earnings call with investors and press, Cook noted that it wouldn’t be fair to just look at the sequential change for the Other category, noting that some products including iPod and accessories are down. With that comment, Cook is strongly suggesting that Apple Watch revenue was higher than the 56% growth, or around $1 billion.

If we factor in an average selling price of $400-$500 a unit, that would put sales at around 2-2.5 million units, but likely closer to the 3 million units predicted in recent estimates if we consider Cook hinted the sales were beyond that 56% growth. And of course that number could increase or decrease slightly depending on the actual average selling price, but that’s certainly closest we’ve come to an official stat on sales for the device so far. And on top of that, Cook responded to recent reports that Apple Watch sales were slowing by noting that Apple Watch sales were highest in its latest June quarter.

Cook also noted during today’s call that Apple Watch sales exceeded the company’s own expectations and that it sold better during its initial launch period than the original iPhone or the original iPad.