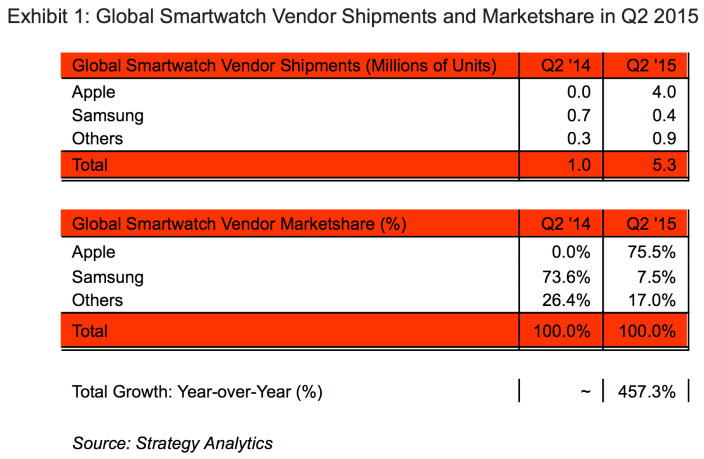 New data from research firm Strategy Analytics shows that Apple’s introduction into the smartwatch market made a dramatic shift in both the overall size of the market and which companies are on top.

According to the firm’s data, Apple claimed a massive 75.5% of the global smartwatch marketshare in Q2 2015 with the launch of the Apple Watch in late April. It also shows that Apple’s entrance stole a huge portion of Samsung’s marketshare as the previous smartwatch market leader dropped 66 points from 73.6% marketshare to a single digit 7.5% …

Strategy Analytics also highlights the year-over-year growth of the global smartwatch market at 457.3% from Q2 2014 before Apple’s entry to Q2 2015 which includes initial Apple Watch sales.

The firm’s data depends on rounding Apple’s Watch shipments to vendors around the world at an estimated 4 million units, relatively in line with the conclusion drawn from Apple’s revenue in the accessory category met with Tim Cook’s description of growth in that category after yesterday’s quarterly earnings.

Even if you just ballpark the numbers in the new report, the narrative for the Apple Watch’s debut is very different than the iPhone’s launch. With the iPhone, Apple only gradually broke into the smartphone market while the Apple Watch is virtually defining the smartwatch market in terms of marketshare.

And while it was previously believed that Apple Watch sales may have been higher during the initial launch day than after, Tim Cook noted during yesterday’s quarterly conference call that Apple sold more Apple Watches in June than in either April or May, lending evidence to the continued growth of Apple’s marketshare for future quarters.