In this week’s episode of the The Logic Pros, Flex audio features are up, with some serious hardware reviews on deck. Next week we will start a mini-series of episodes showcasing some top-notch instruments from the likes of Moog, Native Instruments and more, but first we will dive into Logic’s time compression/expansion and micro pitch correction features:

Logic Pro X comes packed with a powerful set of audio manipulation tools known as Flex. While Logic and just about every other DAW have always had ways to speed up/slow down audio, independent of the file’s pitch or not, Flex parameters give as much more in depth control over our audio than the legacy Time Pitch Machine.

With Flex time we can ask Logic to analyze an audio file allowing us to speed it up or down based on our session’s BPM, and without changing its pitch (for the most part). As per usual, we can only stray so far from the file’s original BPM before we start getting into some nasty sounding artifacts, but the particular analysis mode selected can be helpful. While in most cases Logic will automatically make an intelligent decision based on the audio, it’s always a good idea to have a basic understanding of the options in case it doesn’t.

There are 4 basic time options: Monophonic, Polyphonic, Slicing and Rhythmic, along with two FX based options known as Speed and Tempophone. Mono is for basic single voiced instruments like say a guitar or a vocal; Poly is for multi-voiced audio like a full song or multi-track sample; and Slicing and Rhythm are generally better for drum parts or rhythmic audio. Things get pretty crazy with the Pitch and Tempophone options as each slice or analyzed section of your file will change in pitch and tempo, respectively. This is based on a number of factors including the source material, your quantization settings for the file, session BPM and more. 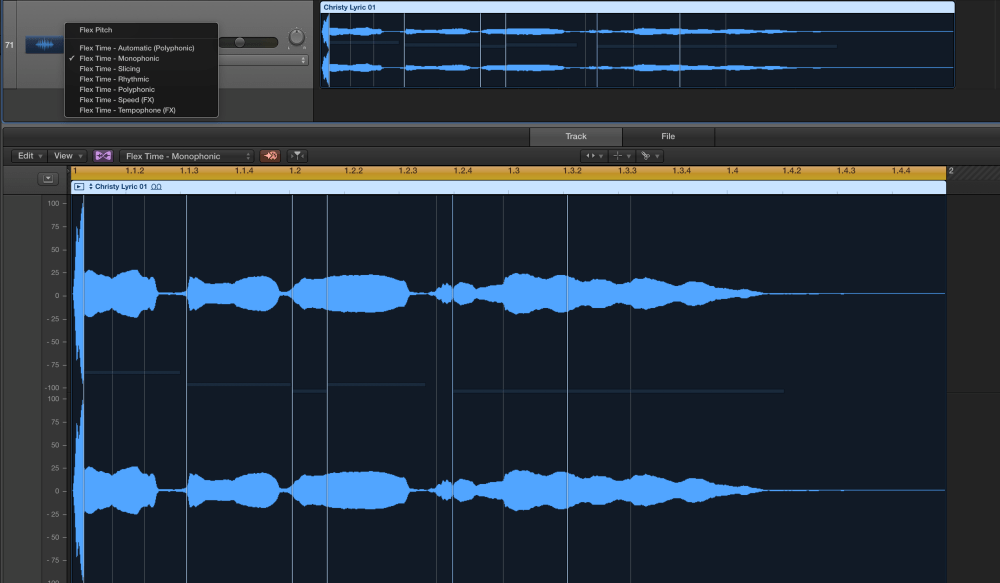 Note: It is always recommended to first know the pitch, key and BPM of the file you are about to Flex, but it is not completely necessary.

1. First lets make sure we click the Flex hide/view button on the arrange page (seen above) or push command + F. Then engage Flex mode on your desired track by hitting the same icon on its track header.

Note: Whatever BPM your Logic session is set to is the base tempo with which Logic will assume the file originated at, so it is recommended to have your session’s BPM set at that tempo before analyzing a track. Otherwise you may get into some annoying issues. Let us know in the comments below of you need a hand with anything.

2. Give Logic a second to analyze your audio file and then you’re ready. You’ll notice Logic has chosen an algorithm for you, but feel free to change that selection from the new track header menu that has now appeared to better suite your creative needs.

3. Now the audio region will compress/expand in time based on the tempo of our session. If you speed the session up, the audio will come with you accordingly. Super helpful for demoing or auditioning alternate tempos for songs, on top of a wealth of other creative possibilities in the sampling arena and more. You’ll also notice that the typical MIDI region quantize features are now made available to you, which can be helpful for loose rhythmic parts, minor corrections or even creative beat making.

We also have some additional manual controls provided allowing us to to create custom segments on the track, variable speed audio files, and to alter the pre-made segments Logic has assigned. These are likely more useful to power users, but nonetheless very helpful.

Pitch features were added to Flex mode with Logic Pro X, offering a deep and applicable pitch tool to the package for free. A term that gets thrown around much too liberally, this isn’t you’re basic “auto-tune”, but rather a tool that provides everything from micro pitch correction to formant and vibrato manipulation.

These sort of audio features are generally only found in tailor-made third party software like Celemony’s Melodyne app, which can run you as much as $399 on its own.

Admittedly, some of the full featured and expensive third party options will offer a wider range of options, dealing with polyphonic material much better in some cases and generally coming with more bells and whistles. However, Flex Time can do everything from micro pitch corrections on that otherwise perfect vocal take, to programmed multi-layered harmonies, those high-pitched choppy “auto-tune” sounding Skrillex vocals and even drastic alien/robotic sounds.

Once a file is set to Flex Pitch mode, we can Pitch quantize it to a particular scale or manually move each note to a desired pitch. The on-screen handle controls that appear when hovering over a segment of an analyzed file will provide 6 controls: Pitch Drift in and out on the top corners which determines the way each note transitions from one to another; a basic Pitch control (in musical cents); a per segment Gain control; Vibrato to determine the amount with which a note naturally wavers around the desired pitch; and Formant control allowing us to change the timbre or tone of the sound without changing the pitch.

1. Flex Pitch is engaged in the same way as Flex Time via the Flex track header switch or command + F

2. This time choose Flex Pitch from the pull down menu.

Note: You can’t Flex both your time and pitch skills at the same time. One or the other folks.

3. The selected audio file now now has additional info/controls displayed on it. Click on the desired region to open it up in your editor window for a closer look. From here we can access all of the above described controls for each segment or note by mousing them to the desired pitch/timbre with the handle controls or the side-mounted region controls.

Along the side of the Flex Pitch window in the audio editor we also have a Pitch Correction tool which will snap the segments to the nearest note; your basic Time Quantize; Gain; and the Scale Quantize feature which allows us to snap the entire performance into a certain musical scale. These side bar controls effect whatever notes we have selected in the audio editor window.

I just want Flex certain regions on a track, not the entire lot!?!. Chill, no prob. We can choose to forgo Flex on any region of a certain track by selecting the desired region and deselecting the Flex checkbox in the region inspector. 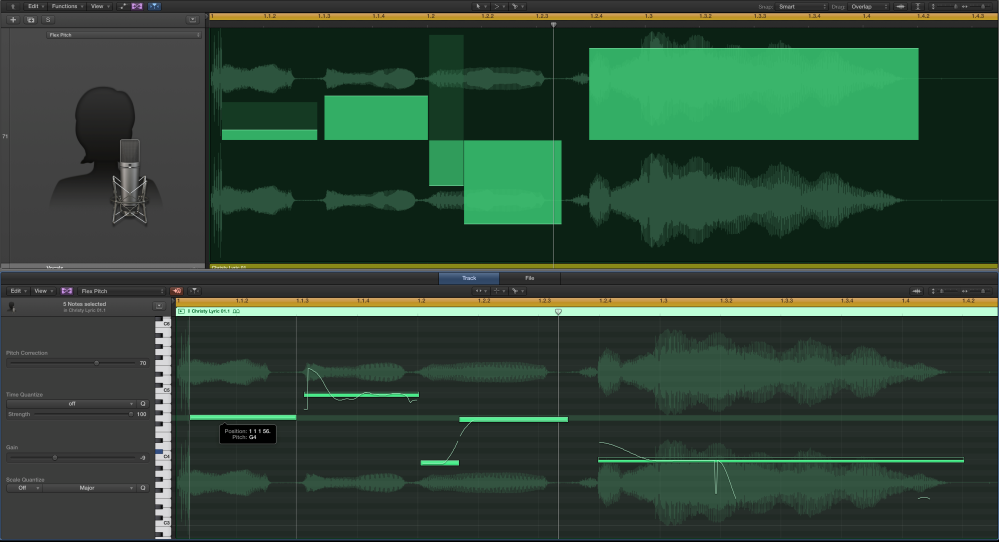 I can’t sing harmonies, but Logic sure can. Artificial harmonies have been used in music production for many years. While there is certainly no replacement for the real thing, duplicating Flex pitched vocal parts on to another track (command + D), and them bumping the notes up or down can offer some pretty impressive sounding fake vocal harmonies.

Hey look a MIDI In button. See that red MIDI In button along the top of the Flex Pitch audio editor window? If you engage it, you can move selected notes to a desired pitch by pushing the keys on your MIDI keyboard. Make sure the playhead is on top of the note you want to move. 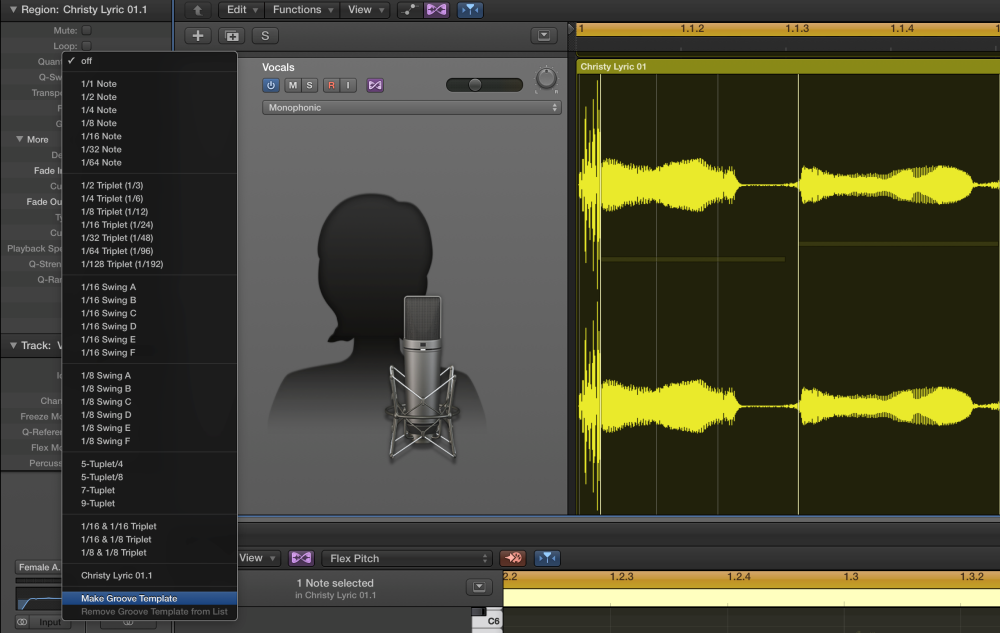 Groovy Templates: We can create our own Groove templates to quantize MIDI parts to based on the rhythmic properties of a Flex’d audio region. Select the audio region, head up to the quantize menu in the region inspector and hit the Make Groove Template option. This can be very helpful if you’re trying to lock programmed MIDI parts up with Live live recordings.