Jay Blahnik, one of the lead directors behind the health and fitness features in iOS 8 and Apple Watch, is this month continuing his tour around the globe discussing his thoughts on health and fitness. Tomorrow, August 5th, Blahnik will host a question and answer session at the North Michigan Avenue Apple Store in Chicago.

During the Q&A session, Apple promises that attendees will get essential tips for staying healthy and active. Of course, Blahnik will focus on how Apple Watch and iOS can play important roles in health and fitness. Following the Q&A, Apple will be hosting a 5K fun run for all ages. Details of the fun run, such as the route, are sparse but Apple encourages Q&A session attendees to participate in the event and “bring only what you need and leave behind what you don’t.” It’s unclear if Apple and Blahnik will host similar events at other U.S. retail stores. 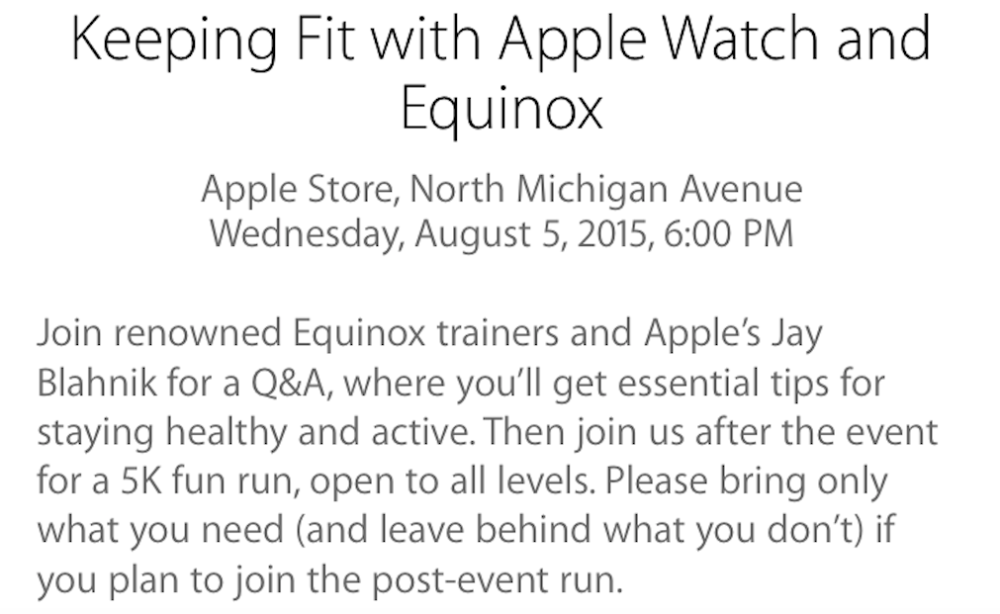 Jay Blahnik also today gave an interview to SELF Magazine during which he discussed how to use Apple Watch to stay fit and healthy, although the full interview itself is not yet available. Yesterday, Blahnik played a small role in an event at the Apple Store in Soho, introducing and conducting a conversation with Bob Harper, a popular nutrition and fitness author.

Previously, Blahnik toured Asia and Australia, stopping in various Apple Stores to give talks on Apple Watch, fitness, and how revolutionary technology can be for the medical field. Blahnik also spoke back in April at an Apple Store in the United Kingdom regarding Apple Watch.

Thanks for chatting with me & @SELFmagazine today @JayBlahnik! Already putting your #AppleWatch Workout tips to good use 💪🏻