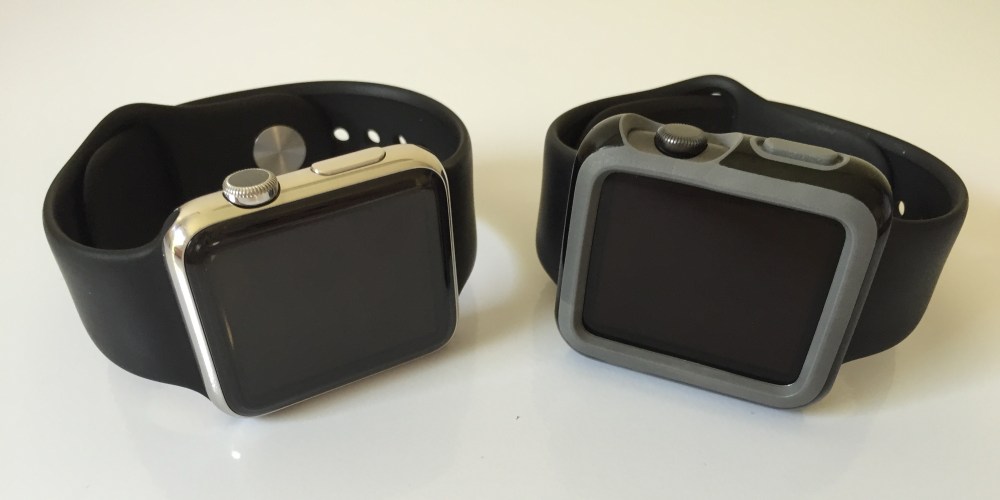 While I wasn’t immediately convinced of the need to ever hide a beautiful Apple Watch under an arguably unattractive protective case, seeing my wife’s experience accidentally damaging the sapphire display solidified my spot in Apple Watch Case Camp in some contexts.

Because Apple Watch materials — aluminum, stainless steel, gold, Ion-X glass, and sapphire glass — are strong but not entirely resistant to scuffs, scratches, shatters, and all the same ailments that strike our iPhones in normal use, it makes sense that accessory makers want to apply the same formula used to produce iPhone cases when making protective solutions for Apple Watch.

But Apple Watch has to look good, so does porting that same formula actually work? That’s the question I’ll tackle with my hands-on experience with Speck’s $29 CandyShell Fit hard shell case for Apple Watch. 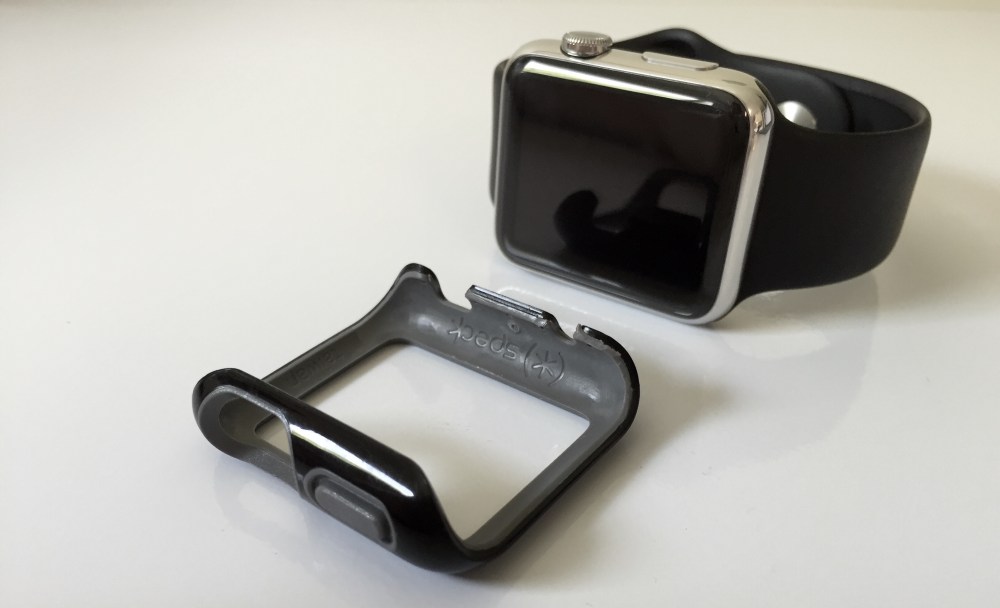 If you’ve ever used or seen Speck’s CandyShell cases for iPhone and other smartphones, you’ll likely feel familiar with CandyShell Fit for Apple Watch. CandyShell Fit uses the same materials: hardshell plastic and textured rubber. Like CandyShell iPhone cases, it combines the two materials into a single piece so installation is one instant step.

To apply CandyShell Fit, just wrap it over the Apple Watch face, positioning the Digital Crown within the cut out on the right side and snapping it on. Taking CandyShell Fit off is also just as instant since it doesn’t require removing bands first as similar Apple Watch cases do.

CandyShell Fit’s instant assembly and removal may be its winning factor for me as I don’t find its close resemblance to an iPhone case very charming. I tested the black and gray 42mm version with my stainless steel Apple Watch and didn’t love the way the silver steel appeared peeking out around the shiny plastic and matte rubber. Matched with a Space Gray Apple Watch Sport, the appearance was a lot more neutral although aluminum doesn’t scratch as easily as stainless steel.

Despite it being a protective accessory primarily, CandyShell Fit’s overall thickness doesn’t do it any favors in a beauty contest either. Maybe it’s because I’m used to how Apple Watch and Apple’s bands look together, but CandyShell Fit’s added thickness makes Apple Watch’s width noticeably disproportionate to the fluoroelastomer Sport bands when viewing it face on. 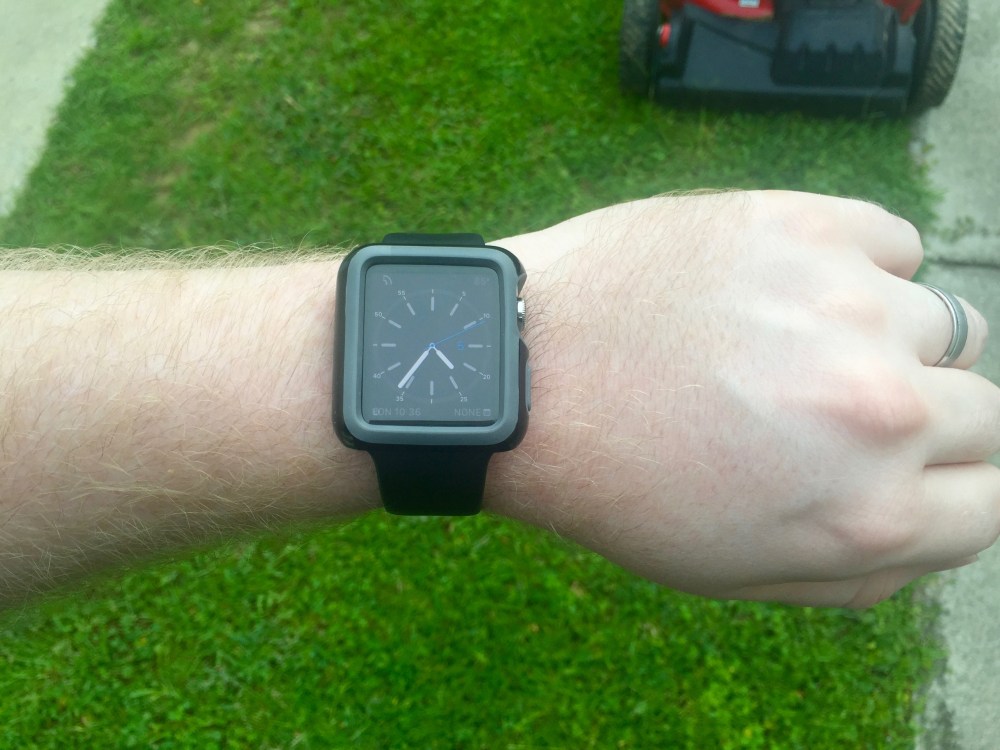 CandyShell Fit certainly performs in what it’s built for: protection. As I mentioned at the top, Apple Watches aren’t completely immune to normal wear and tear, and I can imagine many instances where it’s practical to wear Apple Watch for alerts and fitness tracking while wanting to protect it from likely abuse. In my own testing, I haven’t worn CandyShell Fit during everyday use, but I do place it over my Apple Watch when I’m doing yard work and want to collect credit for my activity data without worrying about dinging my watch.

It’s perhaps overly thick shell and side button cover keep most of Apple Watch’s top and side exterior safe from dings and drops. The display is left exposed unless you apply an Apple Watch screen protector separate from CandyShell Fit, but the case raises enough for the display to sink beneath low enough for safely laying Apple Watch face down without it touching the surface.

Left open are cut outs for the Digital Crown on the right and the speaker and mic on the left to keep everything functional. The metal above and below the display is slightly exposed around the bands as is the majority of the rear, but this makes CandyShell Fit super easy to put on and take off in when you need it and when you don’t. I did find during my use that it reaches back just a tad too much for total comfort as the squared off edges can be felt occasionally depending on how tight you wear your band or how you move your wrist.

For serious damage or too much wear and tear, the $69 AppleCare+ warranty ($49 for Sport, $1500 for Edition) is effectively my daily protective solution, but that’s after a $79 service fee for accidental damage and you only get two of those within two years. Speck’s solution hides Apple Watch’s charm so it isn’t for me on a day-to-day basis, but CandyShell Fit puts a layer of protection between Apple Watch and the elements for under $30. 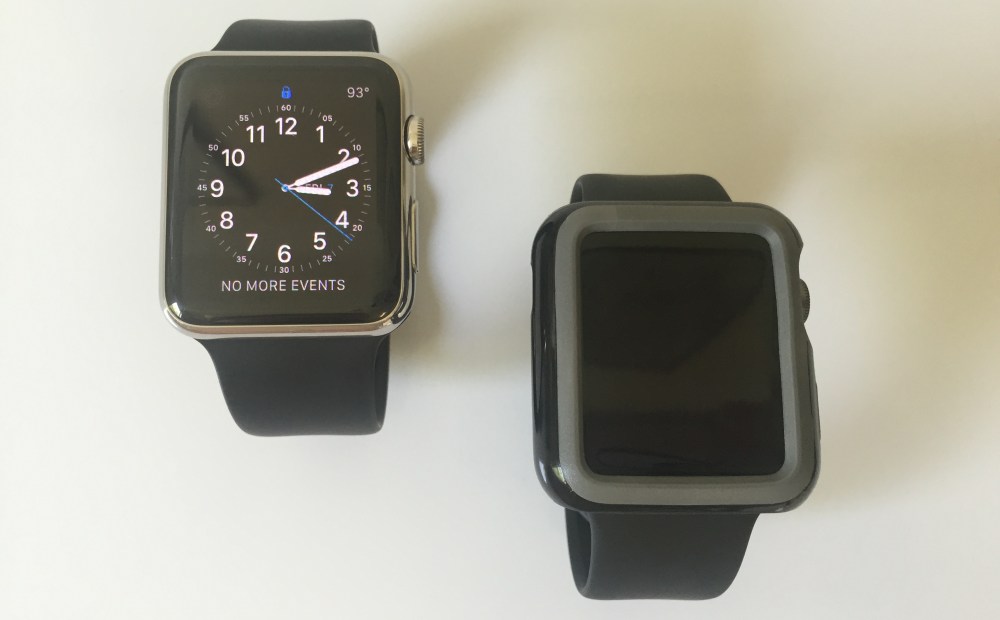 Its dead simple installation and removal process and affordable price make it totally fine for having around and wearing during physically strenuous activities. I can especially imagine a scenario in which a parent buys a teenager a $350-$400 Apple Watch Sport as a major holiday gift or for some special occasion, but only allowing it to be worn once it’s wrapped in a protective case like CandyShell Fit.

Speck’s initial go at this new market leaves opportunity for something more attractive, but future iterations of CandyShell Fit will surely fine tune the appearance enough to make it one of the go-to Apple Watch cases for heavily active occasions. For now, CandyShell Fit is much more about function over form. It’s up to you to decide if that function is worth $29 and disguising your Apple Watch during use.