The Logic Pros: iPad/Mac synths still can’t quite capture the experience of this $1,000 Moog 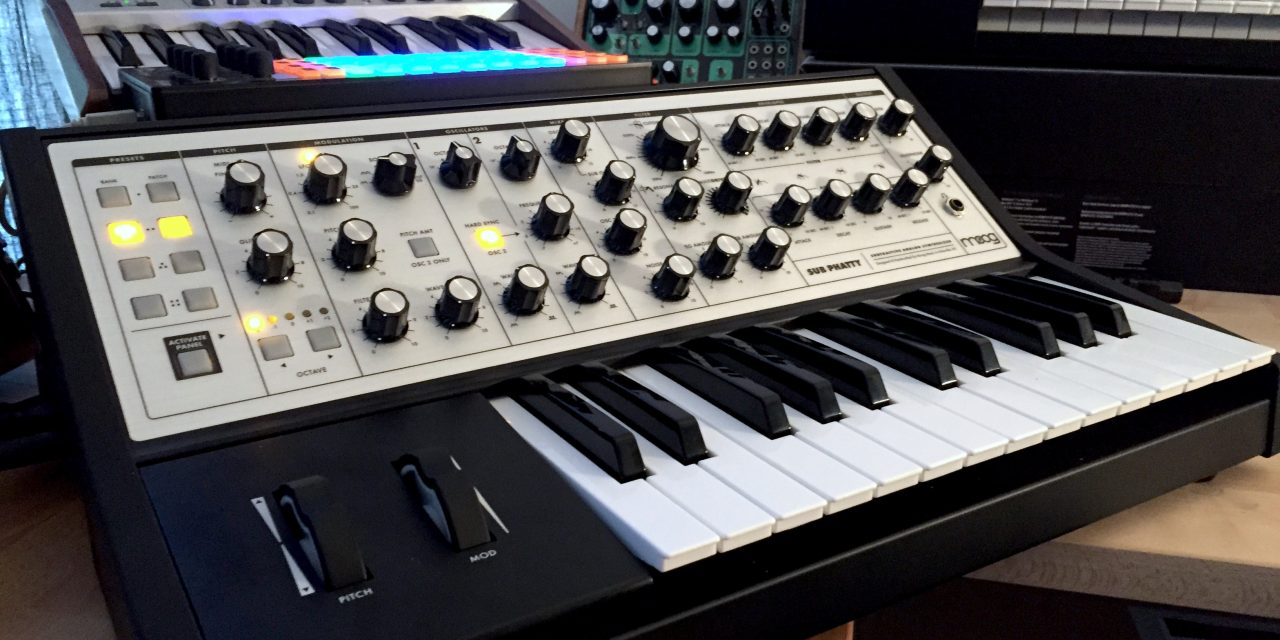 In this week’s episode of The Logic Pros, we are taking a hands-on look at Moog’s Sub Phatty synthesizer to see how it stacks up against some of its much more affordable virtual counterparts.

Moog instruments have been used on many of the most popular and historic records over the years, having become as legendary in their own right in the process. The company is widely considered to be one of, if not the premiere synth makers on the planet. Producing the fattest sounding oscillators and filters around since the late 60’s, Moog’s instruments certainly come at a premium, and there’s a good reason for it. In the past few years the company introduced a couple new synthesizers in its Phatty line, that brought Moog’s flagship features and famous ladder-style filter down to a fairly affordable price point. At just under $1,000, cheap certainly isn’t the word to use to describe Moog’s monophonic, all-analog Sub Phatty synthesizer. But it might be the closet thing to a Voyager you’ll get without seriously breaking the bank. 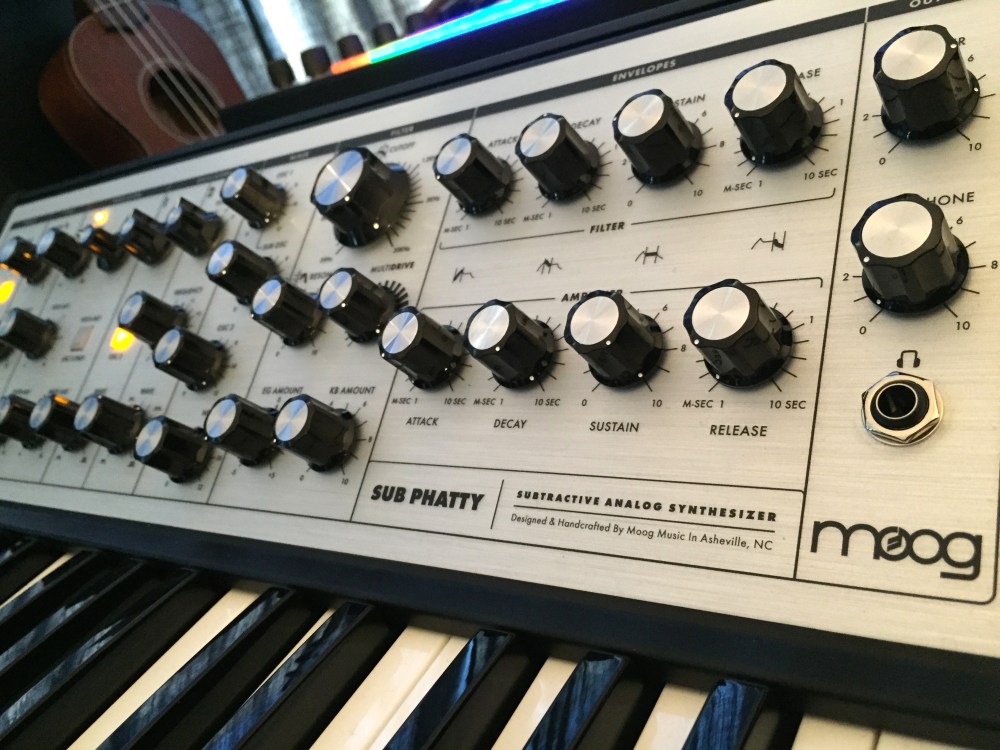 Sub Phatty is the most fully-featured and affordable way to bring the world of Moog to your home studio or live stage rig. We recently had a chance to spend a few weeks of hands-on time with the instrument to see if it offers up enough bang for the buck against exponentially more affordable software synths on Mac and iPad:

Virtual synths are fantastic, I use them everyday. But there is just something about having the physical controls right in front of you, and with Moog you know you’re dealing with quality. Anyone who has had the opportunity to play a Moog instrument knows these guys take their hardware seriously. Hand-made in Asheville, North Carolina, every Moog instrument I have come in contact with is made with superior craftsmanship, from the outer shell and front panel, to every last knob, fader, LED, button and switch. And the Sub Phatty is no exception. This is one solid piece of kit. There are no wobbly knobs, switches or buttons. All 25-keys (up to 7 octaves) and the pitch/mod wheels are solid. Everything you see is made with impeccable quality. There is just no comparing something like this to most other sub $1000 synthesizers in this regard.

We get a near knob-per-function set-up along the top, meaning just about all the sound shaping parameters are clearly laid out for us with physical controls. Just about every single one of these controls, as well as the keys and pitch/mod wheels, will beam out MIDI CC data in real-time to Logic Pro X with ease. On top of the somewhat curious function buttons found along the top left of the instrument, along the side we have a typical 1/4″ input and output, a series of familiar CV jacks and MIDI over din cables or USB.

One minor aesthetic complaint I have are the near-impossible to read labels on the I/O section of the device. However it’s not much of a problem, once you have it memorized. 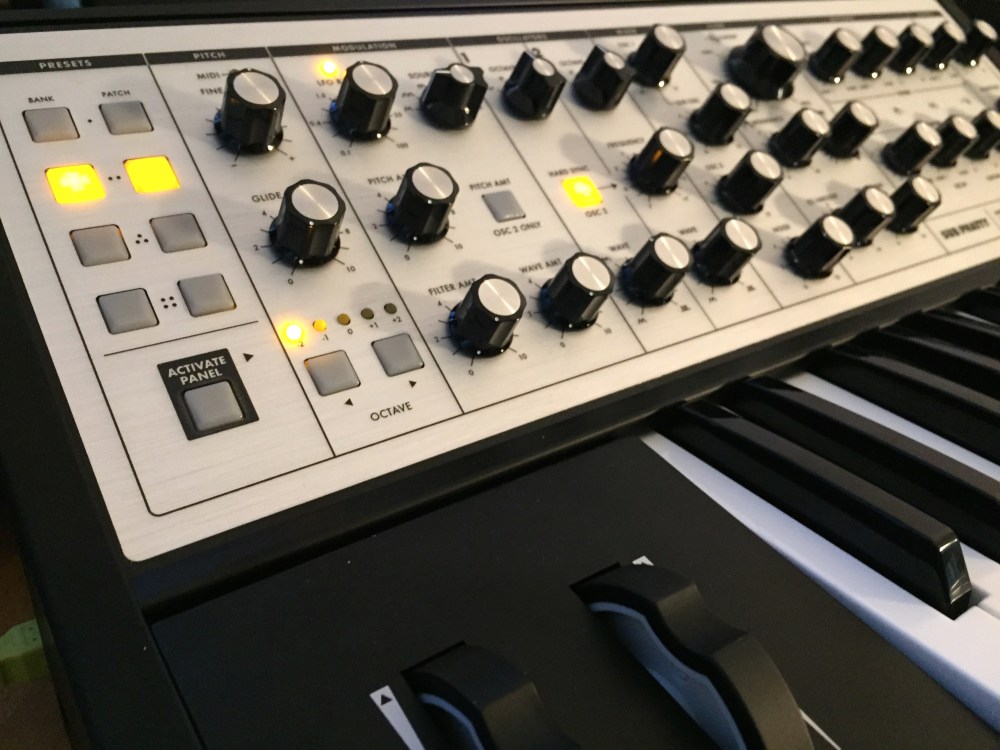 Sub Phatty has two completely analog oscillators, both very stable and ready to go within seconds of booting up. The continuous variable oscillator design allows you to blend between triangle, saw, square and pulse width waves. We can sync them up for some pretty over the top harmonics and detune Oscillator 2 against Oscillator 1 by  7 semitones in either direction.

The Mixer section allows us to blend the two oscillators together along with a sub oscillator (a square wave tuned 1 octave below Oscillator 1) and a Noise generator. Not only do these gain pots allow us to mix the various sound sources together, but we can use them drive the filter section as we get into higher values resulting in some desirable distortion. Especially when used with drastic filter and resonance settings/modulation.

The Filter sounds great, as you would expect with a Moog synthesizer. It’s by default a fully resonant, 4-pole ladder-style filter with a 24 db. slope. It has a post filter Multidrive circuit which I found to be very useful both for subtle warmth and overly distorted sounds. It can basically enhance a totally clean sound with some gritty harmonic overtones, but at its maximum, will take it to complete hard clipping madness.

Along with the multi-wave LFO modulation section, we have a pair of very capable envelopes, that do much of what you would expect, and quite well. Like a few other features of the main panel, both the LFOs and Envelopes have some very powerful features hidden under the hood.

While just about all of the main sound shaping controls are right there in front of you, there are a number that are found by engaging the secondary control mode:

On the top left of the main panel we have the somewhat odd-looking (at first) Preset/Shift Mode buttons. Sub Phatty can store 16 sounds: 4 banks with 4 patches each. Choose a bank on the left and then a patch within on the right, simple enough. To save a Patch, simply hold the desired Bank and Patch button. But when you engage Shift mode (Bank button 4 + Activate Panel), these buttons flip over to secondary functions, along with many of the main panel controls. There are a number of system features like saving and factory resets down here, but you’ll also find very useful sound design parameters. In Shift Mode, Noise doubles as the External Input level, Hard Sync doubles as the Oscillator Reset, The Pitch Amount button doubles as the LFO Reset, and so on. The Filter Poles selections are made this way as well with additional 1, 2, and 3 pole options available.

While some of the secondary functionality can be tedious, remember that USB jack? There’s an editor or plug-in available for your Mac, that makes this stuff and more, much easier to get at and understand: 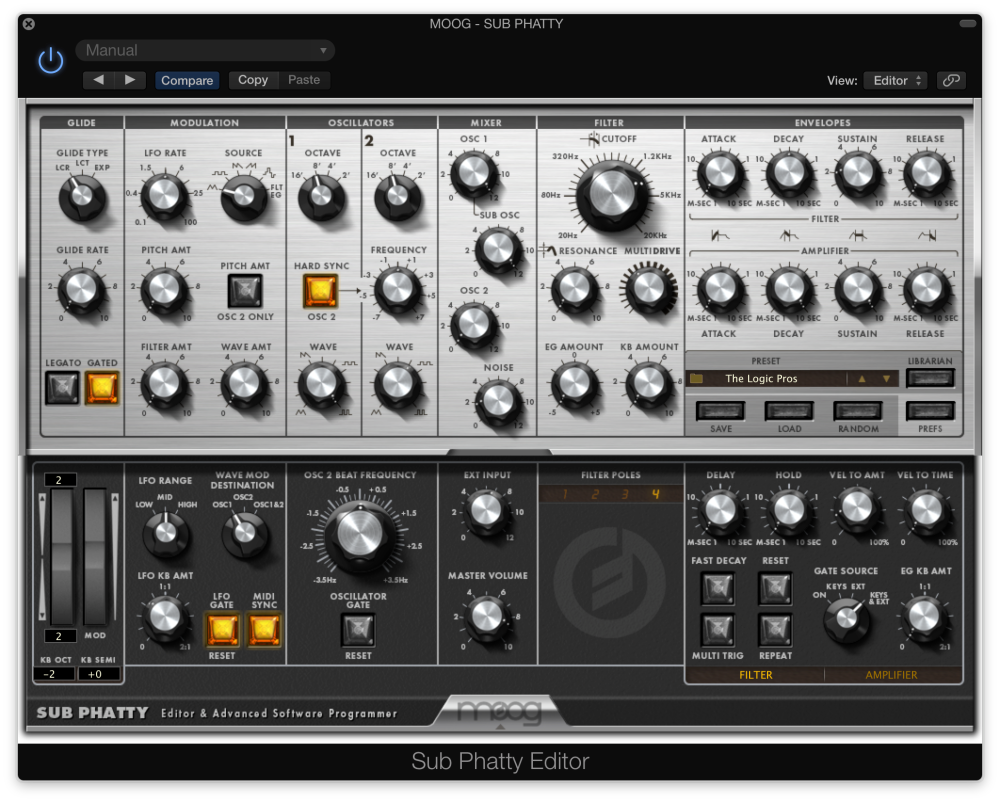 The Moog Sub Phatty Editor is essentially a real-time, virtual representation of the hardware, with full control (over MIDI) of every parameter available and more. It also acts as a Librarian or patch hub of sorts, allowing us to store as many presets as we want. From there we can then load one or more of them (up to 16) back into the Sub Phatty’s on-board memory.

As you can see above, the editor looks very much like the instrument itself, but with an extra bottom black panel housing pretty much all of the useful sound design controls. All of the global system related stuff, that would normally take a fairly complicated series of button presses on the Phatty itself, are neatly kept in the Preferences menu of the editor. You’ll also find a host of preset Patches to audition and use at your discretion inside the Librarian panel: 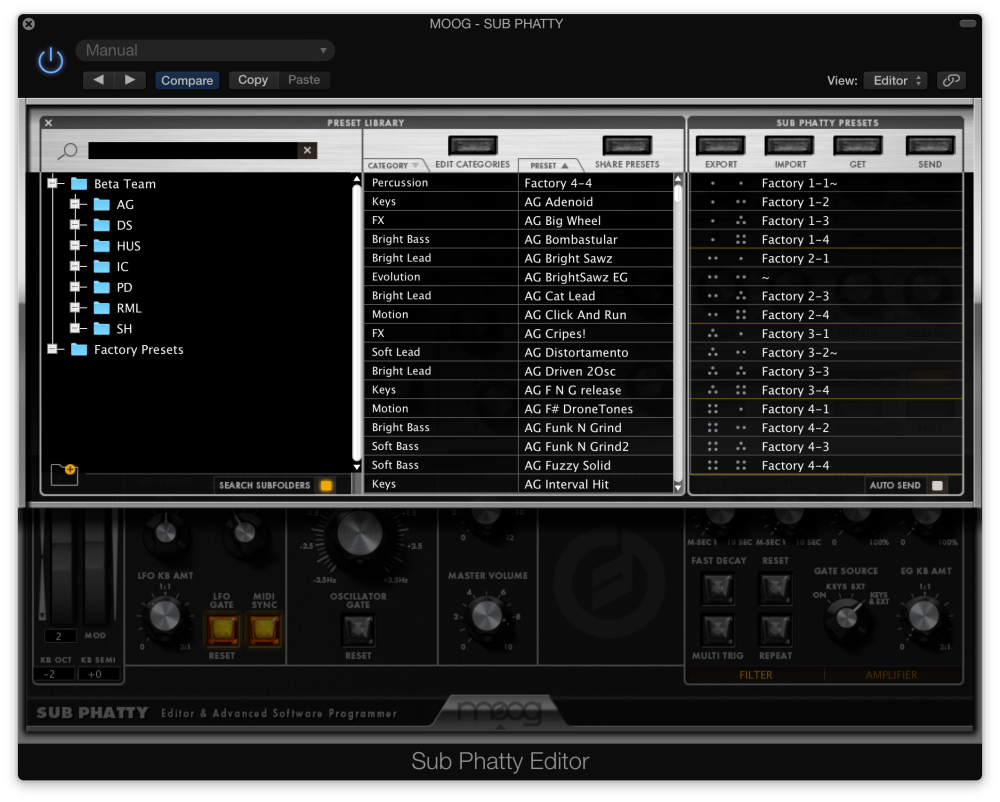 Better yet, the editor will load up inside of Logic Pro X and other DAWs bringing it about as inside the box as a dual oscillator, all-analog Moog synthesizer can get at this price. As we mentioned above, just about every knob, key and switch you can (or can’t) see on the instrument will talk with Logic as well. Meaning we can both send and receive MIDI performances from our sessions, and record the moves we make on the filter, mixer, envelopes, LFO and more directly to our MIDI track in Logic:

Simply connect the Phatty to your Mac with a USB cable and OS X will do all the dirty work for you, making the instrument immediately available inside Logic. Using the method detailed in our How to use MIDI hardware synthesizers in Logic w/ External Instrument plug-in episode, we can do everything from record a simple filter sweep in real-time directly to our MIDI track in Logic, to complex programming on hundreds of different modulation sources and parameters.

You can hear the results of that program data below, which is a quick taste of the 4 pole filter with a couple saw waves, the sub oscillator, some hard sync and a bit of resonance to finish it off below. Next week we will be looking at another heavy hitter from Moog with some more audio examples of both and how they play together/with virtual synths.

Outside of the filter poles and reset buttons being hidden slightly to deep under the hood, and the lack of aftertouch control on the keyboard, I really don’t have much bad to say about the Sub Phatty. At $900, it is certainly out of range for the average home producer, considering how much mileage you can get out of a $200 virtual synth. However, as someone who has used virtual synths for the better part of 15 years, it is just a more immersive experience to make sounds and play music with your hands instead of a mouse.

It’s not just the physical controls though. There are some fantastic virtual synths out there, some that you can get sounds from this Moog will never be able to make. But there is no arguing that Moogs come with a signature sound you just can’t get elsewhere, and in my opinion the Phatty has it. With its fairly deep and simple integration with my existing Mac set-up, pre-filter mixer gain, that glorious Multi-drive circuit, and an impeccable physical design, it’s going to be hard to put this thing away anytime soon.