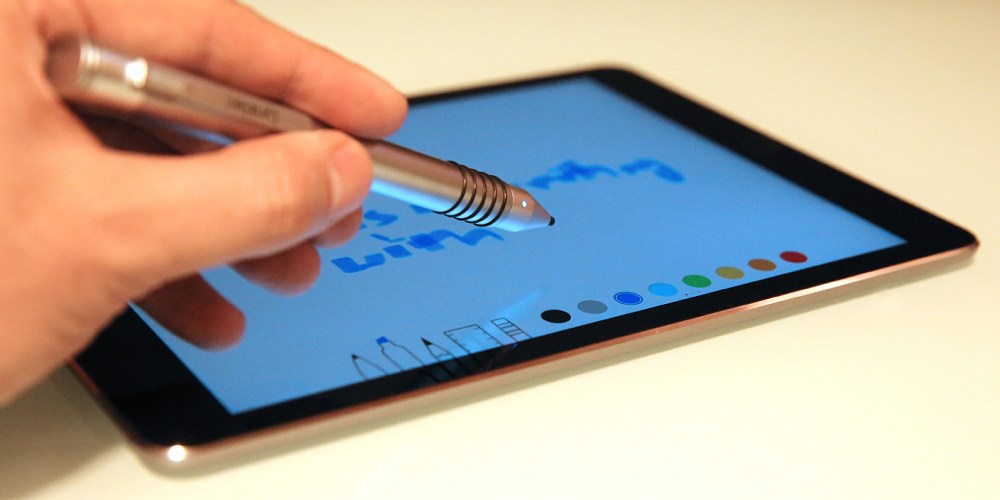 Everyone knew the iPad Air 2’s marquee features — a thinner, lighter body, Touch ID, a gold color option and much faster A8X processor — but fewer people realized that Apple also made subtle changes to the new tablet’s screen, not only improving its visibility outdoors but also changing the way it registered touch input. All of the tweaks added up to a noticeably better user experience, but one category of accessories unexpectedly wound up broken: digital styluses. As it turns out, fine-tipped styluses use tiny electrical pulses to trick touchscreens into thinking they’re fingers, and the pulses needed to be recalibrated to work reliably with the iPad Air 2’s new screen. Adonit was the first to release an iPad Air 2-compatible digital stylus, the $75 Jot Script 2 (reviewed here), and now there’s a second, more affordable option.

Lynktec is one of several stylus makers that have sought a middle ground between expensive $80-$100 Bluetooth styluses and entry-level $20-$30 styluses that lack electronic hardware. The second-generation Rechargeable Apex Stylus ($60) is, like its predecessor, a mostly silver pen with a battery inside and a shirt clip on its edge. It loses the plasticky black top and bottom in favor of a more thoroughly metallic appearance, retaining five rubber finger grips near its tip for comfort. And while it keeps the 2mm polymer writing tip of the original Rechargeable Apex, it’s now backed by electronic circuitry that works properly with the iPad Air 2, as well as all earlier iPads and iPhones… 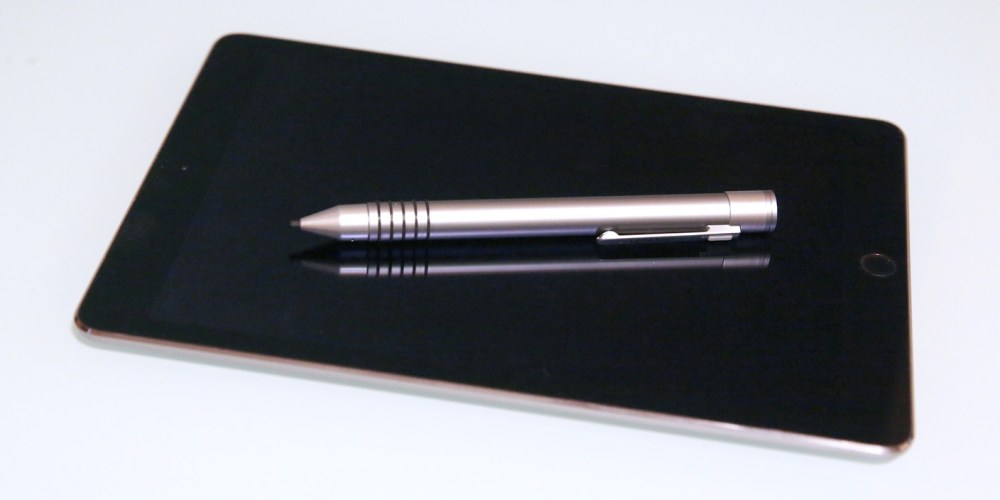 From a technical standpoint, there isn’t much in the second-generation Rechargeable Apex that hasn’t been seen before. Measuring 5.8″ long by 0.5″ thick at its base, the tube initially feels slightly cool and metallic to the touch, and its length is at least a little longer than most of the competing digital styluses I’ve seen. This makes is comparable in size to a large regular pen, and enables it to rest comfortably on the edge of a large hand. To turn Apex on, you press a hard plastic button at the top of its shirt clip; you can use the same button to turn it off, or it will power itself down after 30 minutes of inactivity. A small blue light near the tip lets you know whether the power’s on. 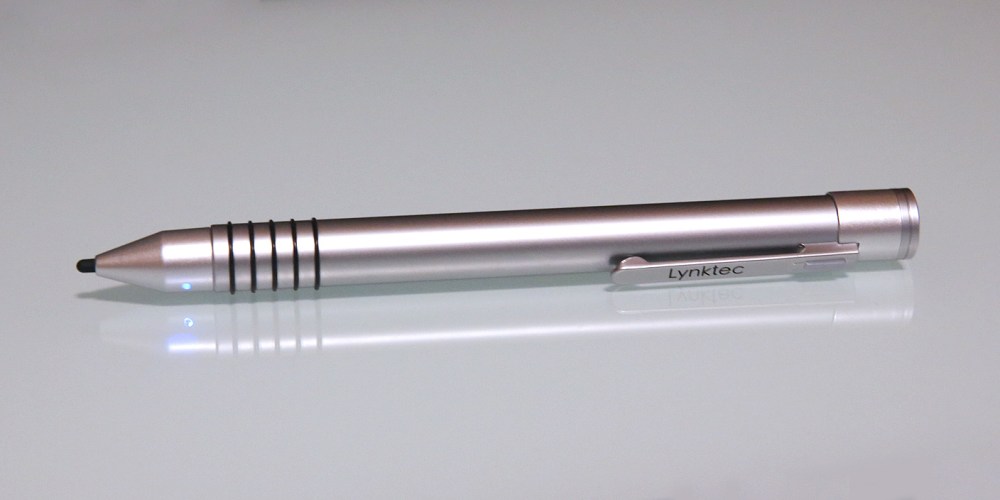 Apex’s back edge hides a screw-off cap. This lets you attach the included micro-USB recharging cable to bring a dead Apex back to life in one hour, with a promised 500 charges — each delivering around 16 hours of battery life. I had no issues during testing with the battery performance, though it should be noted that Apex won’t be sensed at all by the iPad’s screen if the battery isn’t charged and power isn’t turned on; the 2mm fine tip literally requires the battery-powered electronic pulses to be recognized. Some of the competing styluses I’ve tested use hard-to-find disposable AAAA batteries, which puts them at a real disadvantage when they run out of power; with Apex, all you need to do is briefly plug it into its cable.

Using the new Rechargeable Apex is just like using any of the other digital but non-Bluetooth styluses that have been released: you get the advantage of being able to interact with the iPad using a fairly small tip, which enables you to write words and sketch fine details. The tip feels smoother on the iPad’s glass screen than soft rubber, with little drag, but not like a ballpoint metal tip on paper, a sensation no stylus has yet replicated. Below are screenshots of Fiftythree’s Paper, Psoft Mobile’s Zen Brush, and Apple’s iOS 9 Notes app running on an iPad Air 2 with Apex, all of which worked exactly as expected with zero need for configuration. Unlike Bluetooth styluses, Apex does not require any special pairing or developer support to work with individual writing and drawing apps, a major plus.

This is offset by the disadvantage of lacking palm rejection — a Bluetooth 4-assisted and individual app-specific feature that enables some styluses to signal their location to iPads, and thereby avoid misinterpreting a moving palm resting against the screen as input. Depending on the way you write or draw, palm rejection mightn’t matter to you: if you tend to write or draw with your wrist up, no problem. But if you tend to rest your hand against paper when you write on it, you’ll either need to adjust to Apex or consider a stylus (and specially-updated apps) with palm rejection, instead. Other Bluetooth-enabled features, integrated buttons and sensors for features such as erasing, undoing, and pressure sensitivity, are also absent from Apex. These are the compromises Lynktec makes for its lower price point. 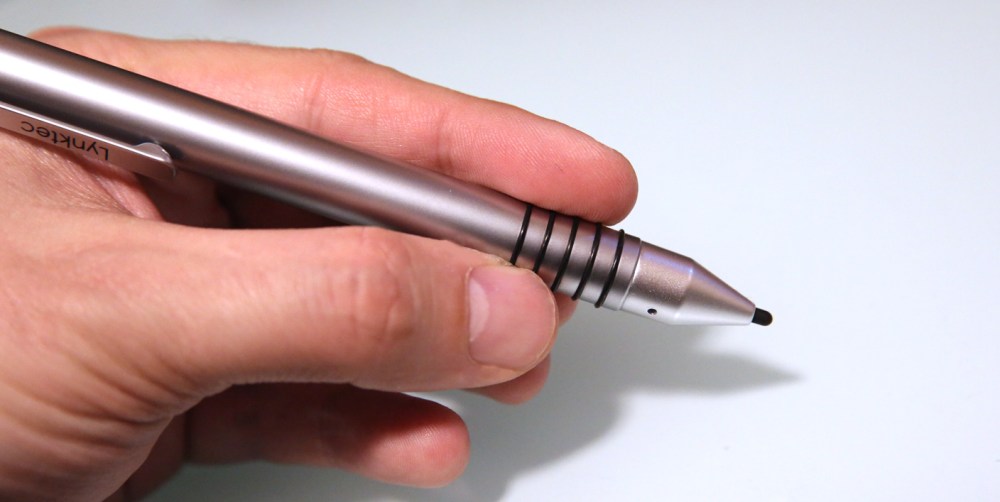 Every time I’ve reviewed a stylus, rumors of an Apple-developed official alternative have been swirling, yet after five years of those rumors, nothing has come of them. Since Apple has only hinted at a better solution, the question of whether or not to buy a third-party stylus has come down to a combination of reasonable pricing, convenience, performance, and support for popular writing and drawing apps. Lynktec’s second-generation Rechargeable Apex offers a compelling value proposition for its $60 price: it works with all of Apple’s tablets and iPad apps, includes all the rechargeable battery life you’ll need for years of use, and is comfortable, particularly for large hands. Consider it a particularly viable option if you plan to do a lot of writing or sketching on an iPad Air 2.