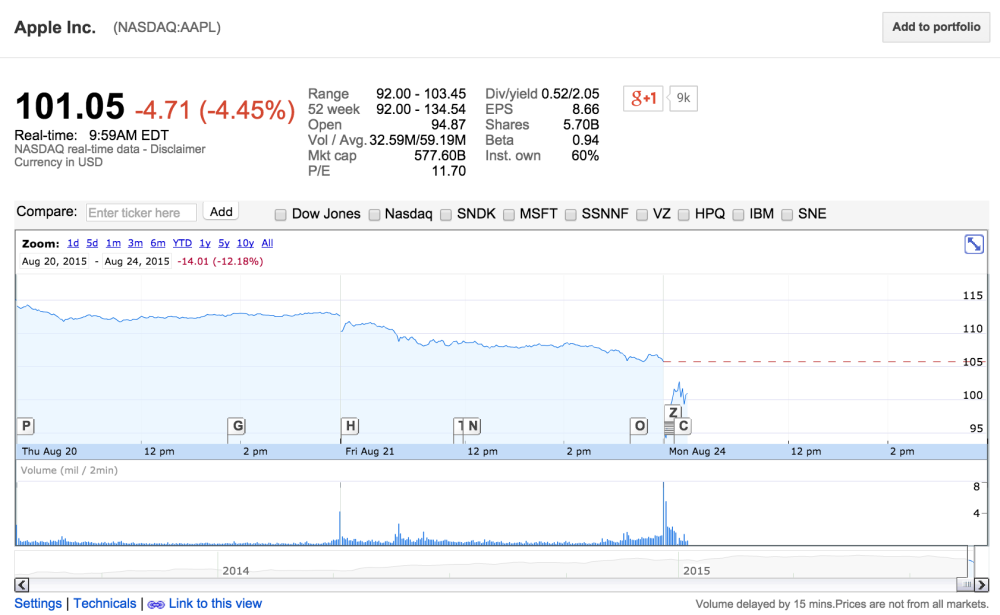 $AAPL stock has opened below $100 in the first minutes of trading, erasing any gains since October 2014. Apple’s stock officially opened at $95.12 but has corrected slightly upwards since to circa $101. The fall in share price saw Apple’s market capitalization lose about $60 billion dollars in value today. Although any fall in price is bad news for the company, the 7% fall should not be taken at face value.

The whole market is down with losses across the board: the S&P saw a 5% overall fall — the largest one-day drop for four years. Technology stocks are being affected as much as any other sector. Twitter, Alibaba, Tesla and Netflix all saw falls in the double digits.

The main reason for the stock fall is knock-on effects from China. In general, investors are concerned that falls in growth in China will have impacts on company performance around the world. For Apple, this means much of the fall is due to speculation that Apple sales will be affected by the faltering Chinese economic growth. Obviously, a problem only truly exists when Apple sales are shown to fall.

So far, it doesn’t seem like that is happening. Apple continues to tell investors that they are seeing strong sales growth for their products. Earlier today, Tim Cook emailed CNBC financial reporter Jim Cramer with rare comments on Apple sales outside of normal quarterly financial reports. In the email, Cook said iPhone activations actually accelerated in the last few weeks.

Time will tell whether the fears of Chinese economic collapse are realized but expect the market to remain volatile in the coming days. Longer term, look forward to the reception of Apple’s new product releases and statements at the next earnings call for a clearer picture on company outlook.