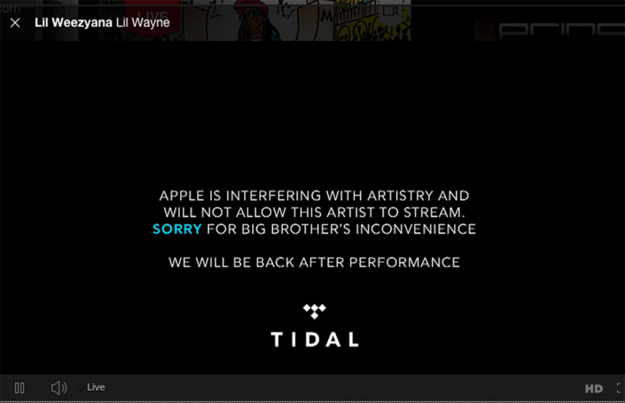 As part of a charity music event raising money for children affected by Hurricane Katrina, Apple Music rival TIDAL streamed the event live on its website. However, when Drake took the stage to perform his set, the stream was abruptly paused. A message from TIDAL said that Apple had banned Drake from allowing his performance to be broadcast online, with TIDAL saying that Apple is “interfering with artistry” and apologizing for the “big brother” influence.

TIDAL made similar claims on its Twitter feed but it turns out these claims are simply untrue. Although it is true that Apple has an exclusivity deal with Drake for his new album, the contract does not stop Drake from streaming live performances. Buzzfeed confirmed that Apple had nothing to do with the censoring of the stream.

Buzzfeed asked Drake’s management for a clarification. It turns out that Drake’s manager made a business decision to not allow the stream, completely independent of the Apple Music deal.

“The decision to not have Drake participate in the Tidal steam has nothing to do with Apple or Drake’s deal,” Drake’s manager Future the Prince told BuzzFeed News. “Point blank, 100%. I made a business decision. Apple doesn’t have the power to stop us from being part of a live stream. The only people that have the power to do that are Cash Money and Universal, and they’re our partners.”

It’s not clear why TIDAL is pointing blame at Apple when it didn’t have anything to do with it. There is a chance it was a misunderstanding and TIDAL misinterpreted the reason why Drake opted out of the stream, or maybe the Apple Music rival saw it as an opportunity to put some bad press Apple’s way. Drake’s manager is as confused as anyone else:

“I don’t understand,” Future said. “If you’re going to say something about the situation publicly, you should tell the truth. They saw the opportunity to take a situation and spin it in their favor as a publicity stunt.”

Despite this, right now TIDAL has not made any retractions and the accusatory tweets remain on the company feed.

1/2 Apple is interfering with artistry and will not allow this artist to stream. Sorry for Big Brother’s inconvenience.