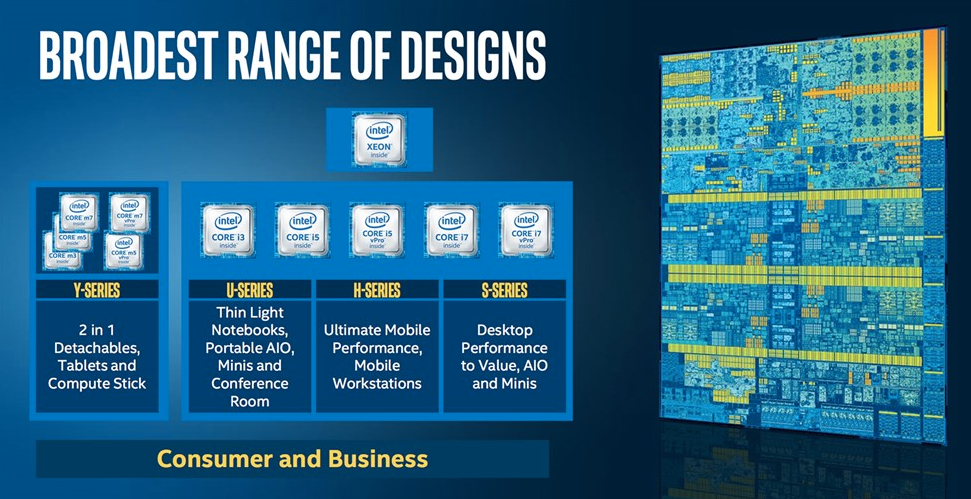 Intel says that its U-Series chips will be 10 times faster than the previous generation Broadwell chips, with 34% faster graphics. The chips are also expected to offer up to 1.4 hours longer battery life than last year’s and use Intel 520 HD Graphics. There will be one i7, one i5, one i3, one Pentium, and two Celerons available, not including vPro chips. The chips are destined for MacBook Air models, with their strong combination of battery life and performance.

Intel says that its Xenon and Core platforms will offer new ports as part of the Skylake refresh. This means that more devices will feature Thunderbolt 3 and USB Type-C. The chips also all support powering 3 4K monitors simultaneously.

More specific details are available in the press release below and in this document. The processors will start to be available over the coming months.

There are over 500 million computers in use today that are four to five years old or older. They are slow to wake, their batteries don’t last long, and they can’t take advantage of all the new experiences available today. Built on the new Skylake microarchitecture on Intel’s leading 14nm manufacturing process technology, 6th Gen Intel Core processors deliver up to two and a half times better performance3, triple the battery life4, and graphics that are 30 times better5 for seamless and smooth gaming and video experiences versus the average 5-year-old computer. They can also be half as thin and half the weight, have faster wake up time, and battery life that lasts virtually all day6.

“6th Gen Intel Core processors deliver some of the most significant advancements in computing that we’ve ever seen,” said Kirk Skaugen, Intel senior vice president and general manager of the Client Computing Group. “New 6th Gen Intel Core-based systems are more responsive than ever with enhanced performance, battery life and security. And they can enable amazing new PC experiences like logging into your computer with your face and having a personal assistant respond to your voice. The combination of 6th Gen Intel Core processors, Windows 10 and beautiful new systems from PC manufacturers make this the best time ever to buy a new computer.

In addition, the 6th Gen Intel Core and Intel Xeon platforms will offer a variety of new features and experiences. More devices will feature Thunderbolt™ 3 for USB Type-C, enabling one compact port that does it all. A user-facing or world-facing Intel® RealSense™ Camera will be available on a range of new 6th Gen Intel Core processor-based 2 in 1s, notebooks and All-in-One desktop systems, offering new depth-sensing capabilities and immersive experiences that allow people to do things like take and share lifelike 3-D selfies, scan objects and print in 3-D, and easily remove and change their background during a video chat.

The 6th Gen Intel Core platform will also advance Intel’s “no wires” initiative to deliver the best experience for wireless display available today with Intel® WiDi or Pro WiDi. This technology allows people to easily share from their computer to a TV, monitor or projector without the mess of wires and dongles.

The 6th Gen Intel Core processor family helps optimize Windows* 10 features such as Cortana* and Windows Hello* for more seamless and natural interaction with technology. Devices with the Intel RealSense Camera paired with Windows Hello let people securely log in using facial recognition. True Key™ technology by Intel Security is also available on many 6th Gen Intel Core processor-based systems to deliver a secure experience for logging into devices and websites without the need to remember each site’s password.

In the coming months, Intel plans to deliver more than 48 processors in the 6th Gen Intel Core processor family, featuring Intel® Iris™ and Iris Pro graphics, as well as Intel Xeon E3-1500M processor family for mobile workstations and 6th Gen Intel® vPro™ processors for business and enterprises. A variety of devices across a wide range of form factors will be available now and over the coming months from manufacturers around the world. In addition, Intel is offering more than 25 products for the Internet of Things (IoT) with up to 7-year long-life supply and error correcting code (ECC) at multiple TDP levels. Retail, medical, industrial, and digital surveillance and security industries will all benefit from the new 6th Gen Intel Core processor improvements and includes IoT designs from the edge to the cloud.