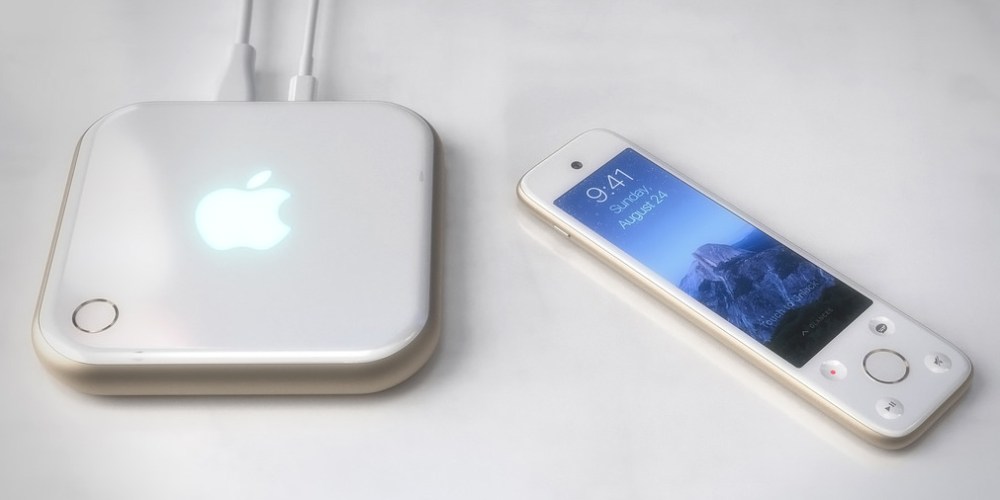 What would it take to evolve the Apple TV from a plastic $69 puck into a covetable device worth a premium asking price? A design collaboration between designers Martin Hajek and Andrew Ambrosino provides some compelling answers, borrowing Apple Watch and iPhone 6 design cues to re-imagine the Apple TV as a two-tone, metal-clad box with a matching color touchscreen remote. The remote can be used for basic icon-based navigation of the Apple TV’s apps, or flipped over to reveal a basic game controller.

While completely different from the actual fourth-generation Apple TV expected to debut tomorrow at Apple’s special event in San Francisco, Hajek and Ambrosino’s renderings suggest an alternative reality where Apple could convince people to pay $300 for a set top box. Black and silver or white and gold versions are shown in the gallery below, each with interesting button designs…

The basic concept behind Hajek’s hardware design is a return to the “aluminum ring, glossy top” design originally seen on the first-generation Apple TV, but resized and reshaped to mimic the curvy look of the Apple Watch. A glowing Apple logo and Touch ID button are equally improbable top features, nonetheless giving the set top box a distinctive exterior.

Hajek’s remote borrows design elements from the iPhone, including everything from a FaceTime camera to a color touchscreen, a Touch ID sensor, and metallic edge buttons, while its back has the circular directional controller of the second- and third-generation Apple TV and four game controller-like action buttons. Like the Apple TV box, Hajek’s mix of metal, plastic, and glass elements (and twin control surfaces) is a huge stretch, but looks very cool, regardless.

Ambrosino’s iOS 9-influenced Apple TV UI concepts, which debuted before Hajek’s hardware renderings, are expanded to show a touchscreen with a scrolling list of icons, scrolling lists, and a Lock screen. The icon list looks similar to the iPad app selection feature in iOS 9’s split-screen multitasking pane, and suggests — despite Apple’s many prior remote control design decisions to the contrary — that being able to see things on your remote rather than just swiping through lists on the TV would be beneficial.