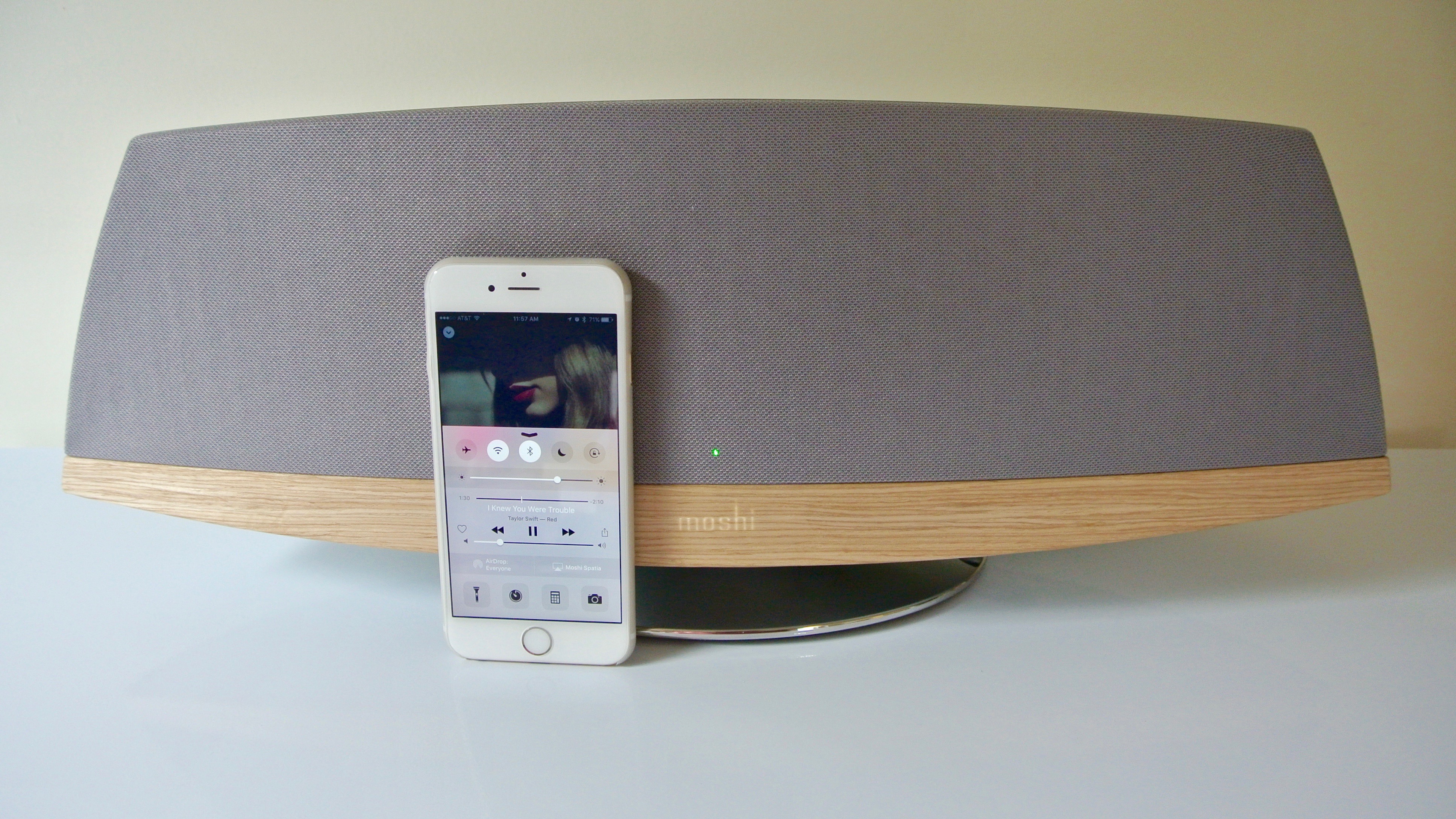 Apple’s AirPlay wireless audio protocol didn’t really take off in standalone speakers, but that doesn’t mean every company has abandoned it. Moshi’s Spatia, which recently launched after first being unveiled at CES 2015, relies on AirPlay for wirelessly streaming and playing audio from iTunes and iOS devices. Spatia packs five dedicated drivers and two amplifiers behind a fabric speaker cover to deliver impressive sound within a standout design. AirPlay has some well-known benefits and issues, so is it worth investing $399 in a speaker that depends on Apple’s sometimes-shaky technology?

Spatia’s exterior design is a major part of its story. The fabric speaker cover and oak veneer panel feel like a throwback to classic speakers from earlier decades, without clashing against the plastic chrome pedestal and curved black shell. Spatia is meant to fit in with modern decor and contrast with boring black box speakers, succeeding at both. Even when no music was coming out of Spatia, I personally found it to be pleasant as an design object.

Compared to small portable Bluetooth speakers, Spatia is a bit heftier than photos may suggest. Measuring 19.57″x 7.2″x 7.64″ and weighing in at 7.27 pounds, Spatia packs serious speakers within a solid package. Its wide profile enables it to be carried mostly between rooms rather than from indoors to outdoors, with the only issue being the need for a power outlet. A spinning knob on top controls volume levels, while clicking the large black button toggles Spatia between its three audio modes: Wi-Fi Direct, AirPlay, and AUX. 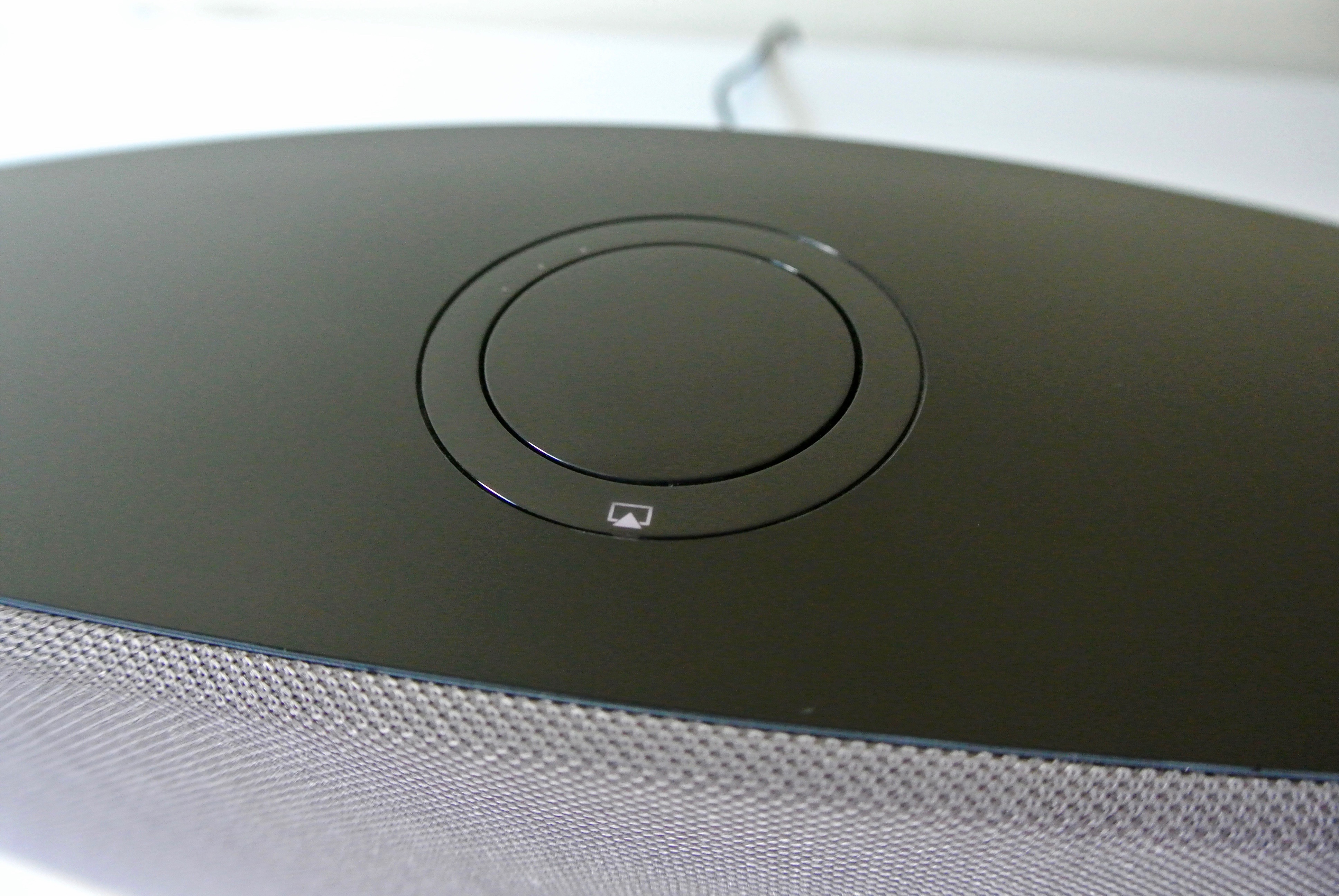 What’s inside Spatia’s stylish design is equally important. iTunes and iOS devices can connect wirelessly over Wi-Fi using AirPlay, and non-Apple devices can use Wi-Fi Direct (which has its limits) for wireless audio playback or AUX for wired. You won’t find any Bluetooth support here.

I’m no audiophile, but I found Spatia’s speaker system to deliver acceptable sound for a speaker of its size and class. It has enough volume for my 2-year-old to tell me it was “too loud” when maxed out, and is definitely more powerful than something like Jawbone’s Big Jambox, but it won’t shake your furniture or vibrate off the table. Moshi’s Apple-like product video for Spatia gives you a look at what’s within.

Setting Spatia up for the first time was fairly easy. This was my first time testing an AirPlay speaker (aside from AirPort Express-connected speakers), so I wasn’t completely sure what to expect. Spatia joined my Wi-Fi network within seconds after connecting it using a self-supplied Lightning cable to my iPhone and saying OK to an on-screen prompt for sharing network settings. The Lightning cable connects under the backside where a USB port and AUX input are hidden out of sight. Moshi’s power cable also runs underneath, cleverly tucking into the base similar to old corded telephones.

This setup process is a one-time task per Wi-Fi network. Comparing the setup process alone, I prefer AirPlay to Bluetooth which requires pairing with each individual device before first use. iOS is getting better at how it manages Bluetooth devices, but I also find it easier to disconnect from AirPlay versus Bluetooth.

AirPlay has fairly earned its reputation for not being rock solid in streaming performance. My experience with AirPlay before now has been strictly Apple device to Apple device streaming: Mac to AirPort Express, iPhone or iPad to Apple TV, and every combination possible. Moshi rightly warns of AirPlay’s two-second latency between playing or pausing tracks and skipping between selections, recommending the AUX input for a wired connection to experience perfect playback.

The issues with AirPlay aren’t limited to a couple seconds of latency before initiating playback; even direct Apple-to-Apple AirPlay experiences this. I experienced multiple instances of frustrating, half-second dropouts regularly during testing. Had my colleague Jeremy Horwitz not described this side effect of using AirPlay speakers beforehand based on his experience testing similar speakers over the years, I likely would have assumed the turbulence was limited to Moshi or even this specific unit, and not an expected issue when using Apple to non-Apple implementations of AirPlay. In other words, if you’ve previously had good or bad experiences with other AirPlay gear, Spatia’s performance won’t surprise you. 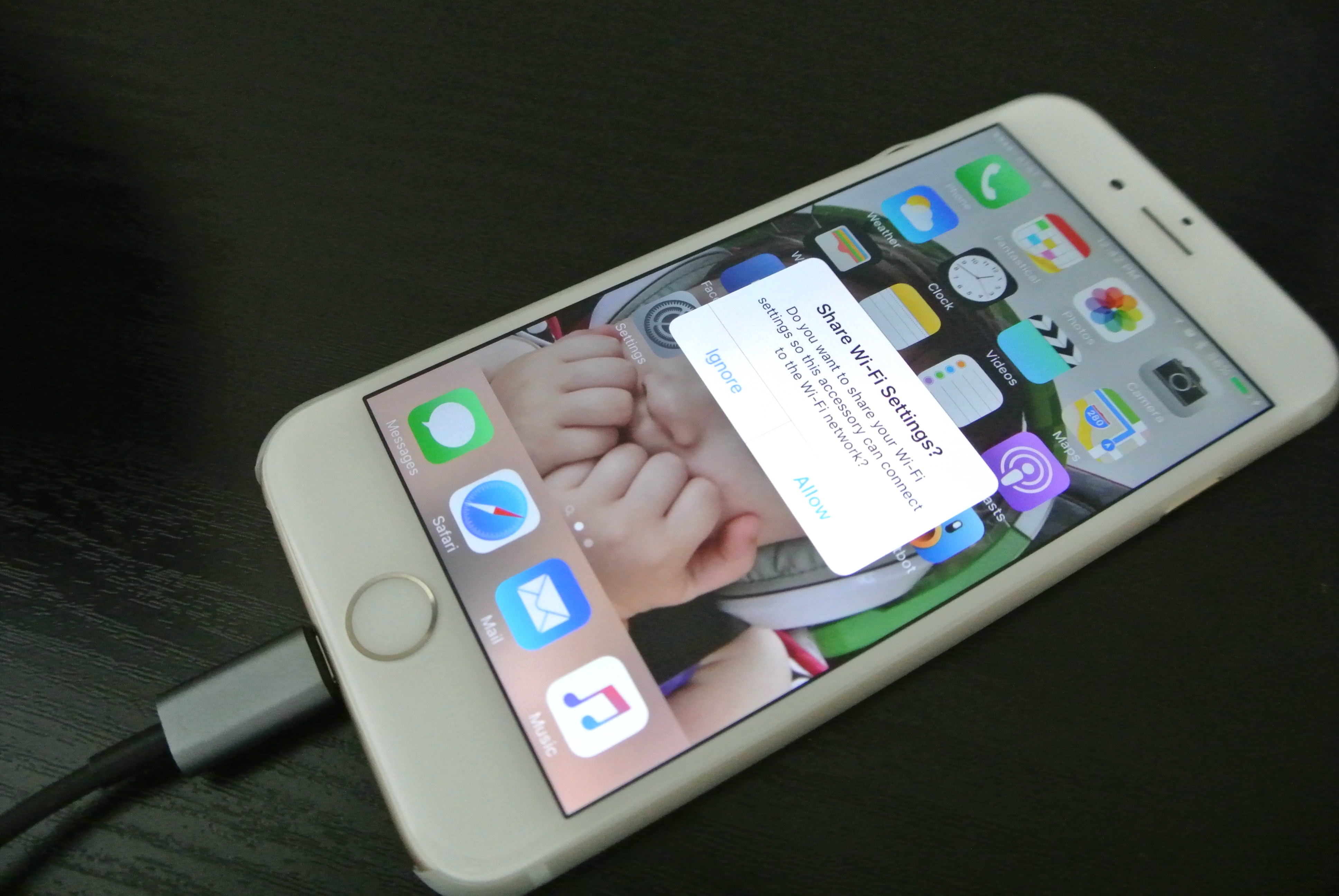 Given the setup convenience and fact that AirPlay is baked into millions of mobile devices plus iTunes, Apple should really invest into perfecting AirPlay as an audio streaming protocol. Apple Music, the company’s new streaming music service, would greatly benefit, as would any other service with an audio component.

There’s also the issue by design of not being able to work with non-Apple devices like Android smartphones and tablets. Wi-Fi Direct enables these devices to stream audio wirelessly and even iPhones and iPads can use this connection if a Wi-Fi network isn’t available, but you won’t be able to connect to another Wi-Fi network to stream with Spotify or Apple Music using this method. It’s ideal for playing offline content in the rare occasion that a Wi-Fi network is unavailable.

Hiccups aside, AirPlay extends wireless playback range to your Wi-Fi network’s range. I appreciated not experiencing range anxiety that I tend to have with Bluetooth speakers, most of which are limited to 30 to 60 feet from the broadcasting device. When I play music through a Bluetooth speaker, I often leave my phone in the same room to avoid disconnecting and interrupting playback if I walk too far away. But using AirPlay with Spatia, I was easily able to walk in and out of rooms throughout my house and even walk around the outside without stopping playback through Spatia because of range. (I use the latest AirPort Extreme tower plus the flat AirPort Express to extend my network so the increased range is very convenient.) 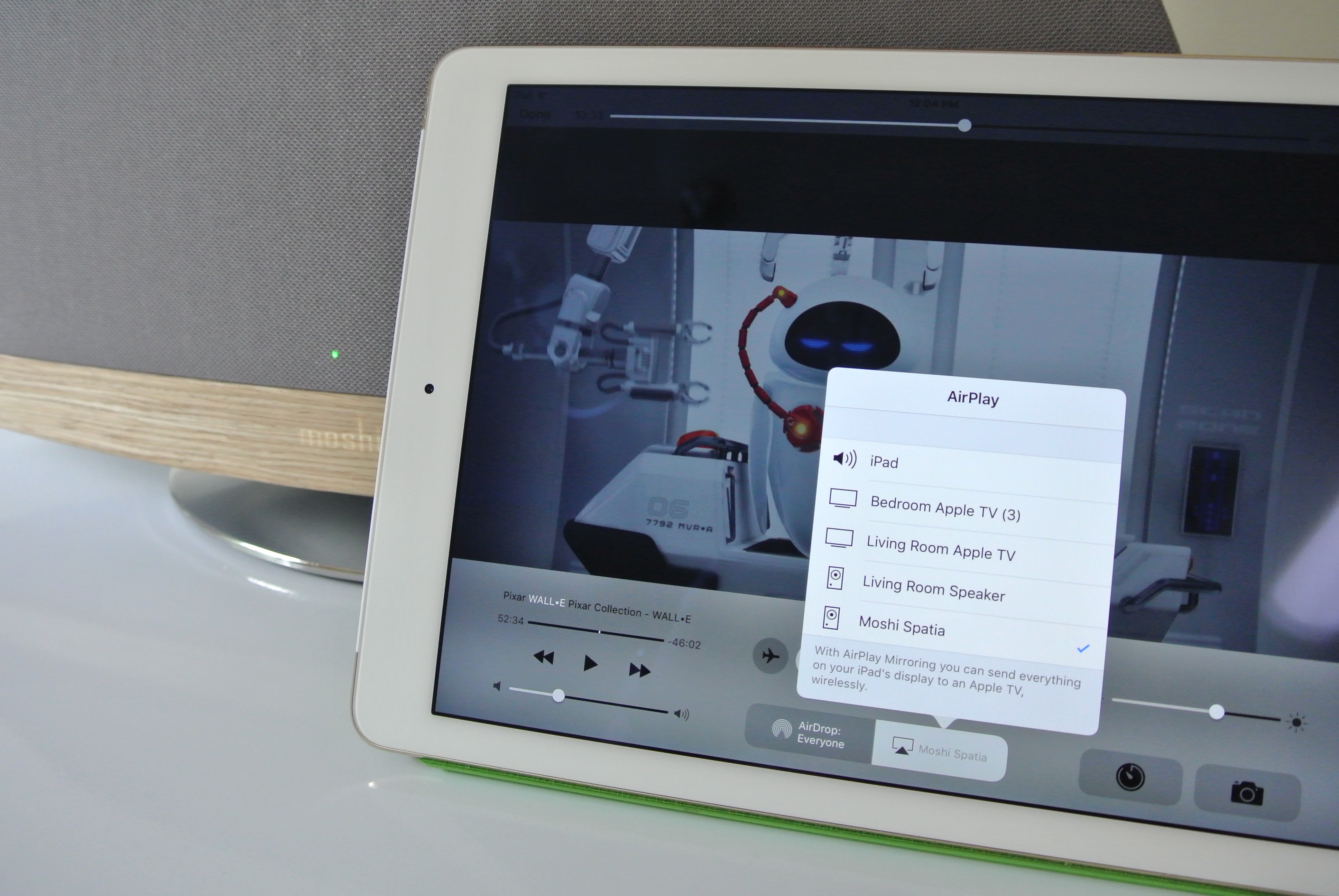 After initially connecting Spatia to my Wi-Fi network using my iPhone, it was dead simple to connect and disconnect my iPad and Macs to Spatia for nearly instant use. Bluetooth speakers are platform-agnostic (and can pair with Apple Watch) plus tend to include rechargeable batteries for more portable use, but AirPlay speakers like Spatia enable less technically savvy users to easily connect their iPhones and iPads and join in on audio streaming.

Spatia can optionally be controlled and managed by Moshi’s Spatia Speaker App for iPhone. This offers four features: setting pre-set and custom equalizer preferences, changing the volume with a virtual knob, playing a variety of ambient noise selections, and managing settings for the speaker. The app only adds to the experience so it’s hard to knock it, but its lack of iPhone 6 optimization and questionable design elements are out of step from an otherwise attractive speaker.

Audiophiles would likely disapprove but I appreciated the ‘bass boost’ EQ preset, which makes Spatia sound more like bass-focused Beats headphones and speakers while still delivering enough treble to not sound washed out… to me. More savvy users will likely enjoy the custom EQ setting although the standard EQ setting sounds fine. The virtual volume knob mirrors even the LED lit level indicator found at the top of the speaker, however, Spatia matches the connected device’s volume, and can also be controlled by iPhone hardware buttons.

The ambient noise feature is a neat use for Spatia when you’re not playing music: it includes nature sounds and even a white noise generator. Moshi’s app includes a timer for running the noise maker for a set amount of time, and can actually be useful with or without the Spatia speaker connected. Aside from setting the speaker’s EQ, the last tab is perhaps the most useful as it lets you assign a unique name to the speaker that changes how it appears in the AirPlay menu, update Spatia’s firmware as needed, toggle the LED status light and Moshi branding light off or on, and reset it to factory settings if needed. 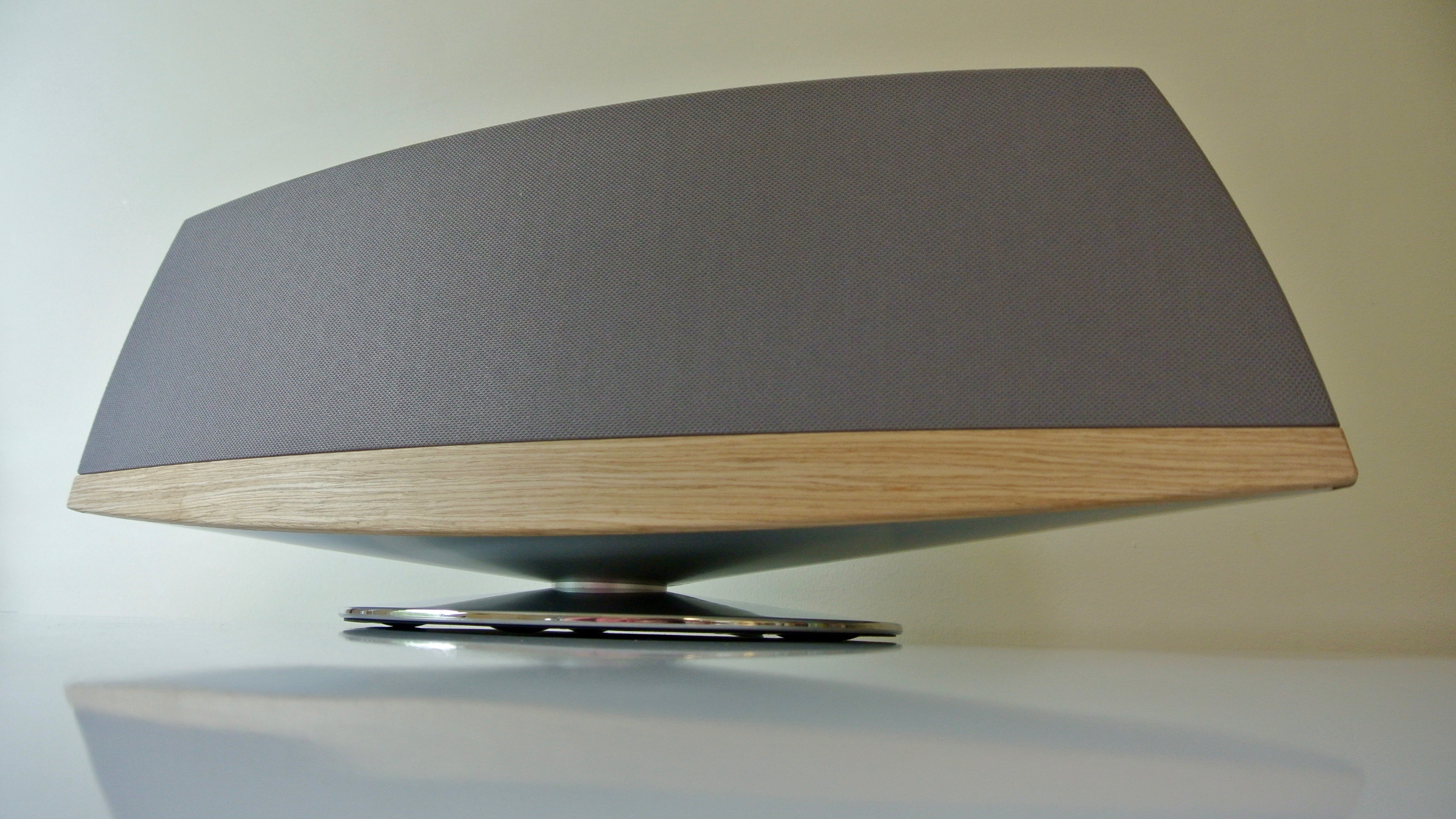 Should you buy Moshi Spatia? Well, it arrives at an interesting time for AirPlay speakers.

It carries a premium $400 price tag that’s much higher to comparable AirPlay speakers that have since been discontinued and heavily discounted to even sub-$100 prices. Sonically, it performs fine for a large room or small apartment, but doesn’t deliver dramatically louder or better audio than the latest high-end portable Bluetooth speakers.

Spatia’s attractive design is the big differentiator here, of course, as it features arguably the best design for a $400 AirPlay speaker. Jump $100 higher in price, though, and you can add optional Bluetooth connectivity to the mix with Libratone’s also attractive Loop speaker (currently street price is actually cheaper), or add another $600 for Bang & Olufsen’s upcoming wool-covered high end AirPlay + Bluetooth A6 BeoPlay speaker.

If Spatia included Bluetooth connectivity for wider compatibility and maybe even a rechargeable battery for portable use, it’d be an instant recommendation. In its current shape, Spatia is a respectable AirPlay speaker that innovates more in design than functionality. Decide for yourself if an AirPlay-only, wired speaker is right for you, but Spatia is worth consideration for its design alone if so.