Apple TV apps limited to 200 MB in size, any additional assets must be downloaded on demand 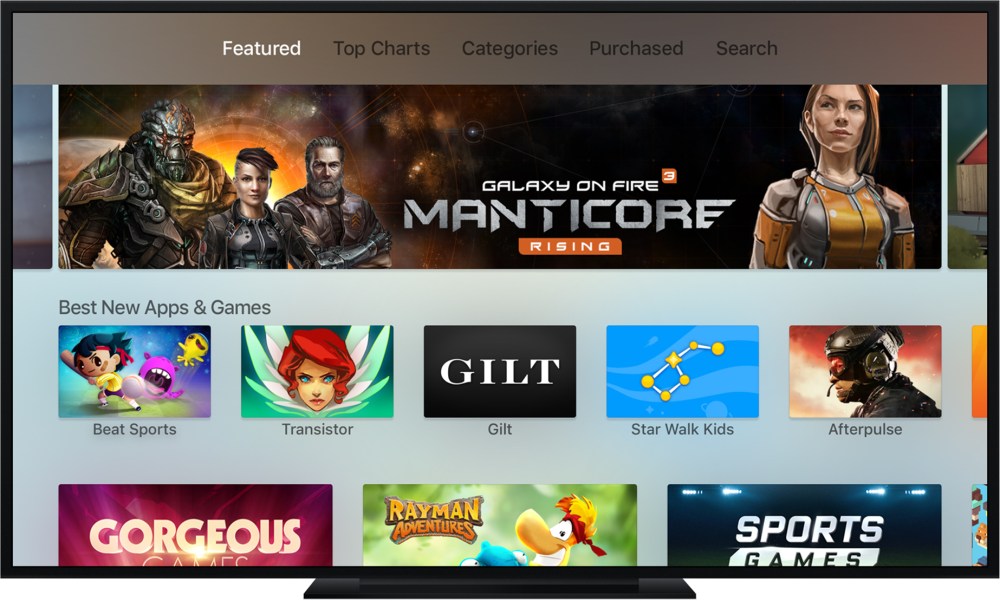 The new Apple TV comes in 32 GB and 64 GB flavours, but Apple doesn’t want you using all that space up too quickly. Developers have to comply to strict rules about how their apps can use local storage. For starters, the app binaries themselves cannot exceed 200 megabytes of static resources: any resources required over that cap must be available to download on-demand and are only cached for a limited time. This means that games are going to have to really reorganize their code to segment their gigabyte blogs into small level chunks.

In addition, Apple says the Apple TV has no app-accessible persistent local storage. This means that all data must also reside in iCloud, such that if the system decides to delete the app data, it can be redownloaded.

From the developer reference:

There is no persistent local storage for apps on Apple TV. This means that every app developed for the new Apple TV must be able to store data in iCloud and retrieve it in a way that provides a great customer experience.  Along with the lack of local storage, the maximum size of an Apple TV app is limited to 200MB. Anything beyond this size needs to be packaged and loaded using on-demand resources. Knowing how and when to load new assets while keeping your users engaged is critical to creating a successful app.

The 200 MB limit places a cap on what is possible with the Apple TV for sure. However, a lot of games capable of running on A8 hardware will still be feasible. It will, however, require a lot of work on the developer’s behalf to get the app compatible with the TV. If their game exceeds 200 MB on iPhone or iPad, a lot of refactoring will be needed to make the game fit the Apple TV 200 MB initial app size limit.

Data beyond the 200 MB limit will be cached for an indeterminate period of time, then deleted automatically by the system. This could mean big data cap bills if you switch between a lot of apps — the Apple TV will have to redownload hundreds of megabytes of assets for every app and game used.

For instance, Infinity Blade will need to remodel the way their apps load game content. They can’t ship it all as one big blob of data anymore — it just doesn’t fit the restrictions Apple has set out for its TV hardware. One upside is that this may encourage developers to adopt On-Demand Resources across all its apps — reliving some of the space constraints from iPhones and iPads — as they have to rework it for the Apple TV anyway.