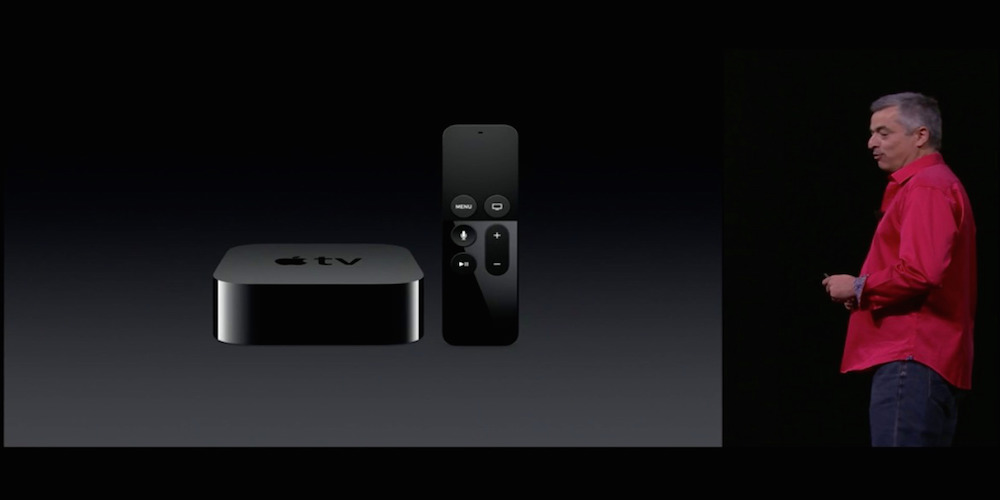 Head below for all the details…

The physical design of the new Apple TV doesn’t get a major overhaul like the rest of the experience with the new hardware looking very similar to the just-over-palm-sized square design of the current and previous generation Apple TVs. The same ports remain on the back of the device and the design appears to be slightly larger than the previous generation, which we noted in past reports is to accommodate new internal components for WiFi. 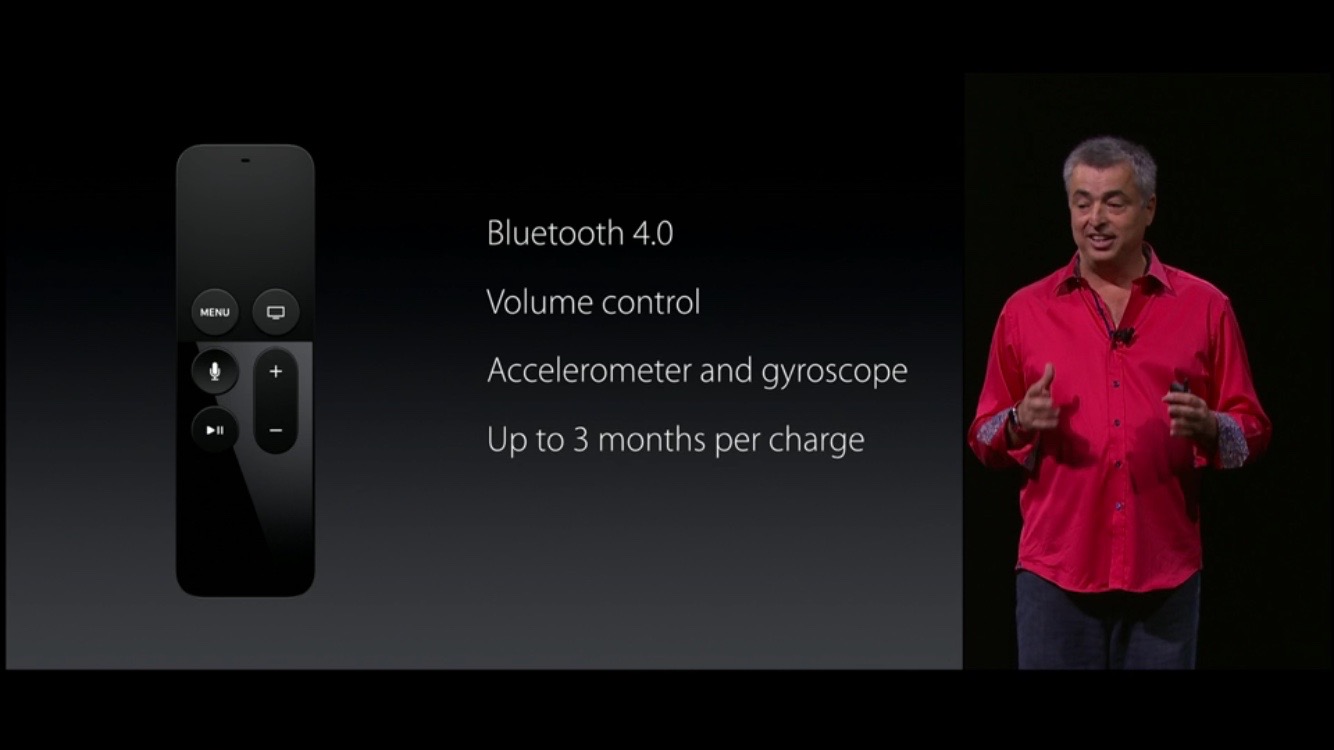 A new remote control. As we reported leading up to today’s event, the new Apple TV includes a brand new remote control bundled with the device that offers a revamped design from the previous generation Apple TV and new features. To go along with larger tactile buttons for navigating the Apple TV with Siri and returning to the device’s home screen, the remote includes a built-in mic necessary for recognizing the Siri commands and a touchpad for navigating the new user interface with touch screen-like gestures. It includes Bluetooth 4.0, volume control, an accelerometer and gyroscope, and it charges via a Lightning connector on the bottom. Apple also noted that users will be able to use the remote to control volume of their TV sets as well. 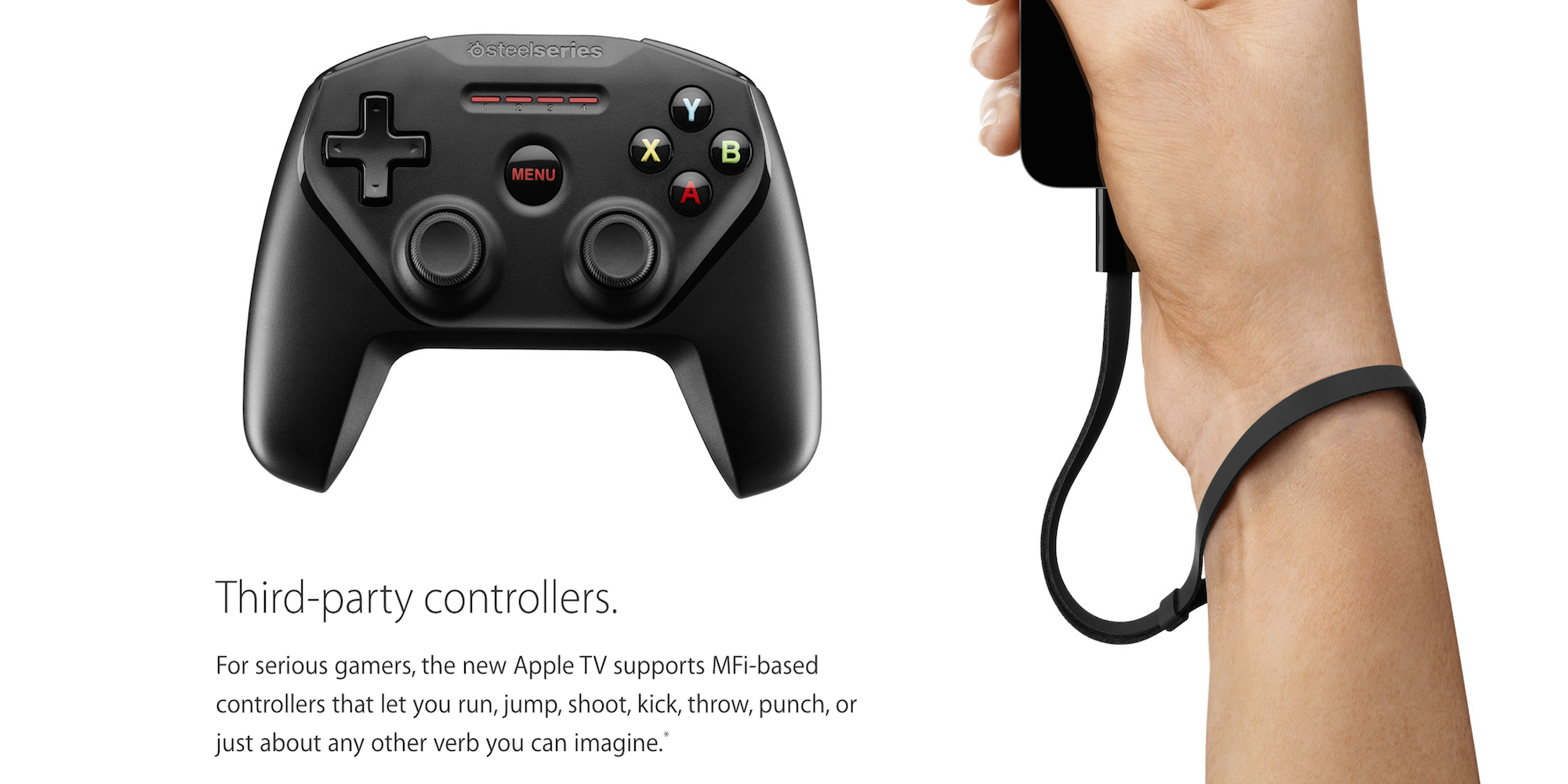 Apple demoed new velocity-sensitive swiping through video with the new remote and had developers of casual game Crossy Road demo their upcoming Apple TV app using the remote’s touchpad to control it. Apple mentioned that iPhones and iPod touch can be used as controllers for games on the new Apple TV.  In addition to the new remotes, the new Apple TV includes full support for Bluetooth gaming controllers, something that Apple first introduced a couple years back for iOS devices through its MFi accessory licensing program.

It’s still made out of an aluminum-like material like the previous model, but it now has a black finish to color match the Apple TV box. 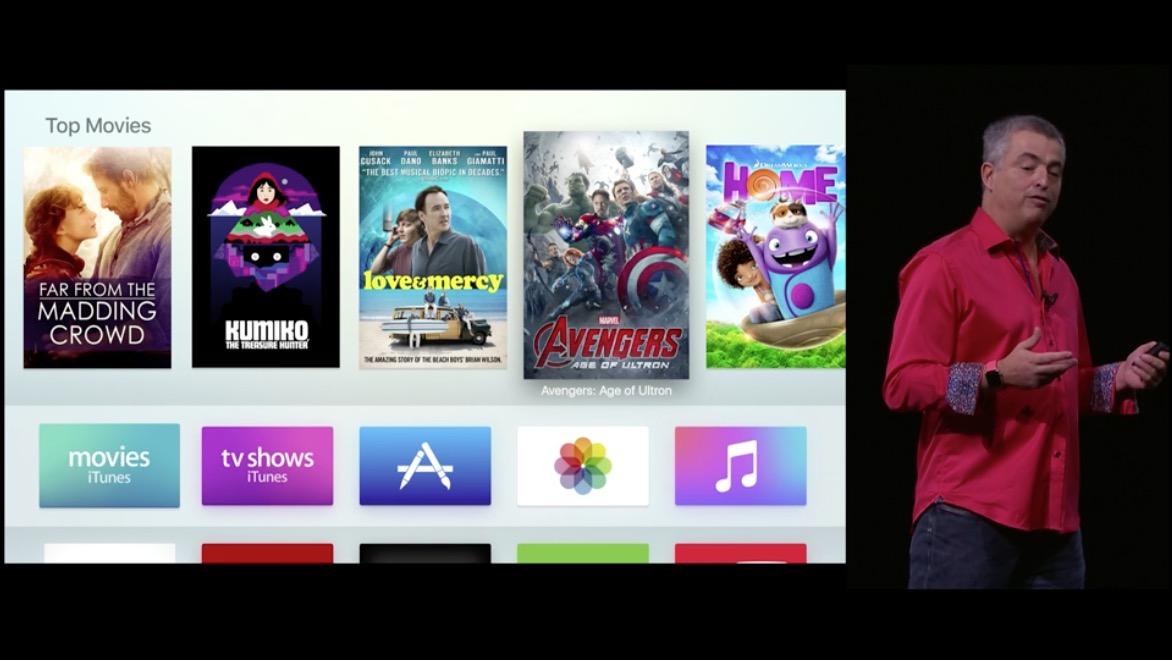 The Apple TVs UI gets an overhaul as Apple introduces a beefed up operating system for the device that for the first time will give app developers open access to developing apps and games for the platform. The new UI isn’t unlike the previous user interface for the device, but it’s clearly been given an overhaul to fit in better with the latest versions of iOS 9 and OS X, as pictured above. The new UI also includes 3D effects on cover art and deep Siri integration: 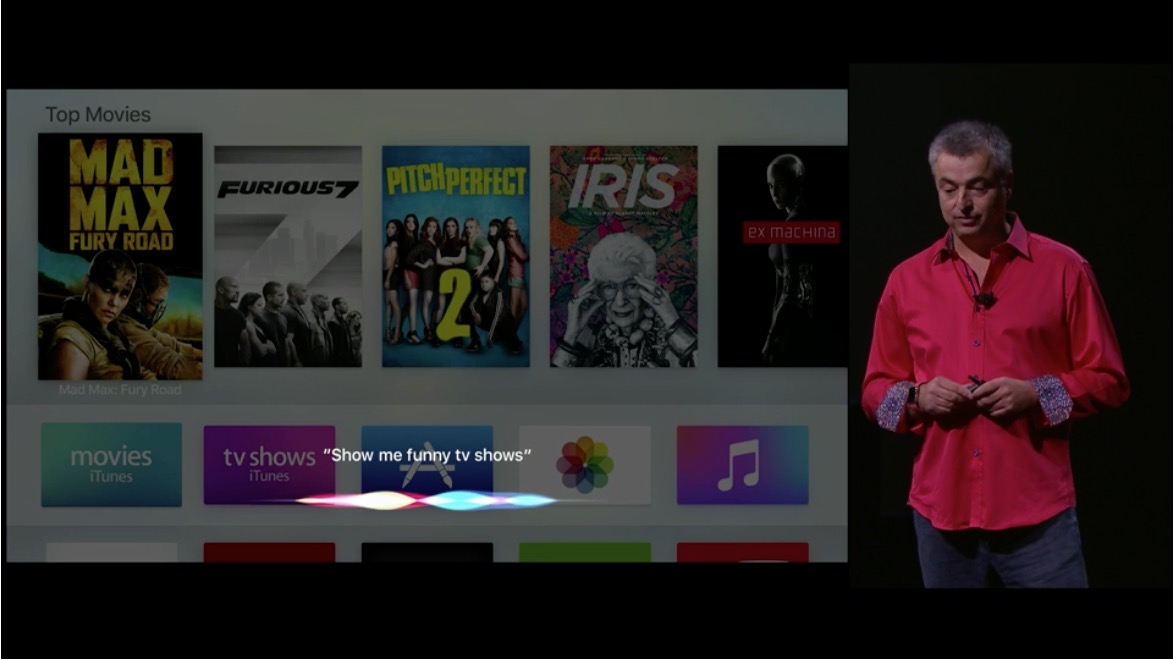 One of the new Apple TV’s standout new features highlighted by Apple is the ability to search for content using Siri voice commands. Apple noted that initially users will be able to search across iTunes, Netflix, Hulu, HBO, and Showtime, but that list will likely grow as developers build and update apps for the new Apple TV platform. Apple also demoed using Siri to recommend content, answer questions about currently playing content, and more directly from Apple TV. And Siri uses the device’s new remote control with a built-in mic (detailed above) to recognize the voice commands.

And lastly for software, following in line with its iOS and WatchOS branding for its iPhone, iPad and Apple Watch operating systems, the new Apple TV comes alongside a rebranded operating system for the device dubbed “tvOS”.

And to accompany the launch of the App Store on the new hardware, Apple announced a number of apps and games coming to the platform, including: Crossy Road, Disney Infinity, Guitar Hero, AirBNB, and Zillow. Apple also noted that developers will be able to create universal apps, meaning users will be able to download a single copy that works across iOS devices and the new Apple TV. 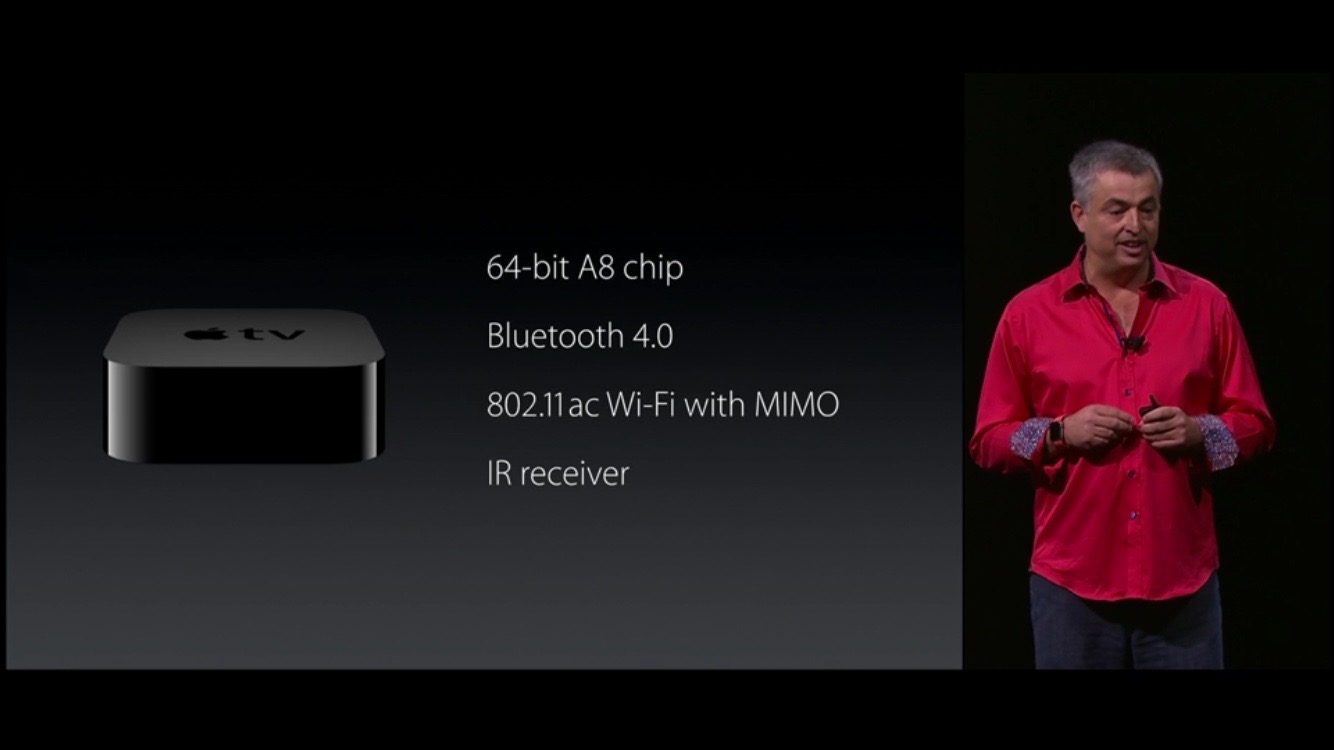 Specs for the new hardware include a more powerful 64-bit A8 chip as its processor (the chip Apple used for the iPhone 6 and 6 Plus and a less powerful version of the A8X it used in the iPad Air 2). That’s an upgrade over the previous generation Apple TV and will help to accommodate new gaming features Apple is offering with the new Apple TV software experience. The device also includes an IR receiver, 802.11ac WiFi with MIMO, and Bluetooth 4.0.

Apple TV starts at $149 for a 32GB model and goes up to $199 for a 64GB model. Both will become available in October when the third-generation Apple TV will stick around at $69. That should give developers a bit of time to start preparing their apps using the same APIs available to them for iOS apps.