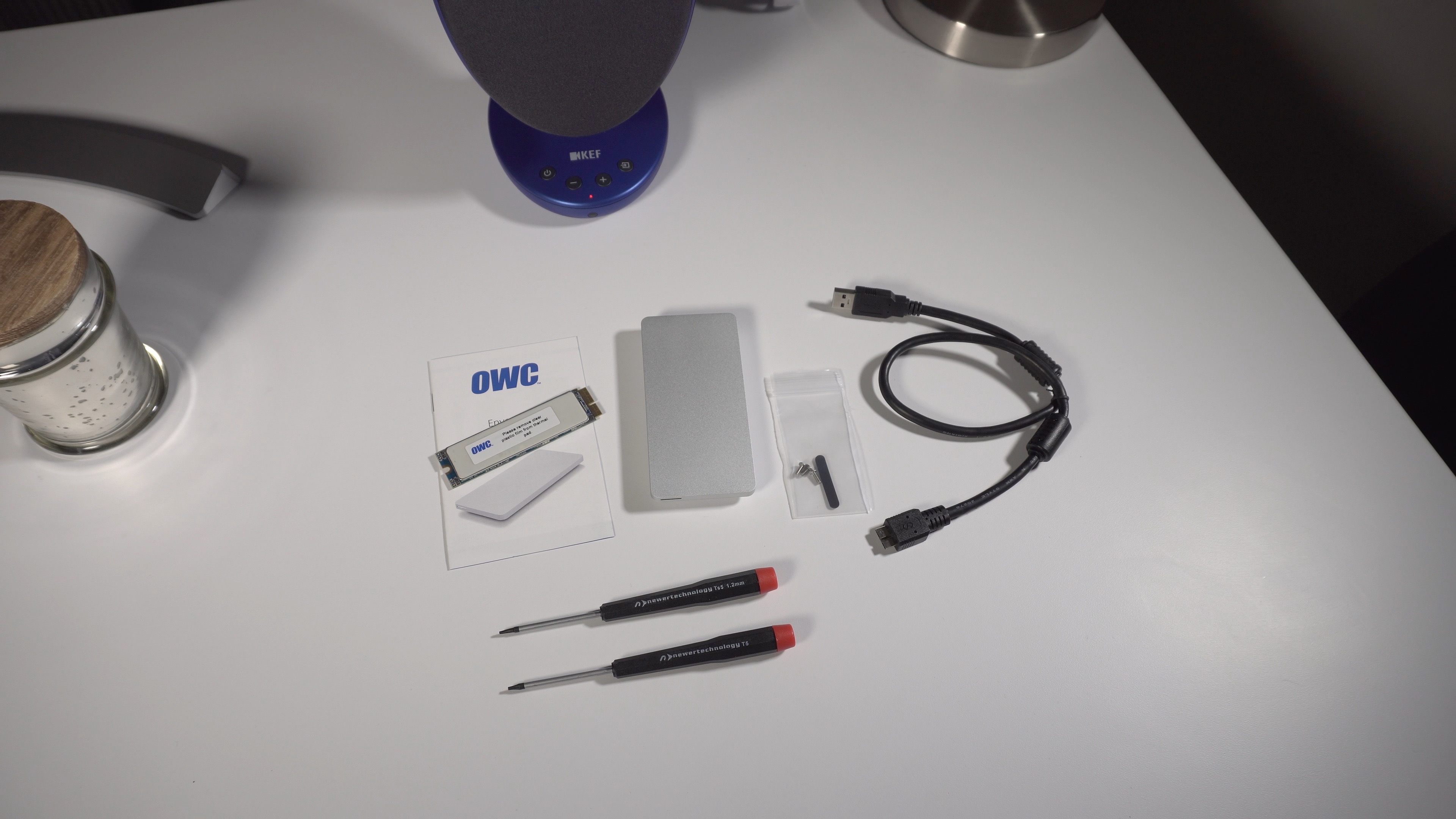 As an owner of a Late 2013 MacBook Pro with Retina Display, it’s slowly beginning to show its age. However, I find that this machine, an i7-powered rig with 16GB of RAM, is still plenty powerful for the applications that I run on a day-to-day basis. For example, with Final Cut Pro X, it’s not the fastest machine in the world (it lacks dedicated graphics), but it’s still plenty competent when it comes to editing and exporting 4K videos.

The biggest bottleneck that I’ve encountered with this computer is its storage capabilities, and that’s something I’ve been trying to deal with since the day I purchased it. With only 256 GB of flash storage, space has been hard to come by since day one. That wouldn’t be so bad if there was a way to upgrade the amount of internal storage, but sadly there has been no upgrade solution…until now.

Back in early March, OWC made a splash by announcing the very first flash storage upgrade solution the MacBook Pro as far back as the Late-2013 product cycle, and the MacBook Air, as far back as the Mid-2013 product cycle. Yes, finally! MacBook Pro and MacBook Air owners with qualifying machines can come out of the storage dark ages with OWC’s new Aura PCIe flash storage upgrade.

The first thing that you should do prior to upgrading your MacBook is to backup all of your files. You can do this by using Time Machine or an external drive. If you opted for OWC’s SSD Upgrade Kit, you get an Envoy Pro drive enclosure, which lets you repurpose the stock SSD that’s removed from your MacBook upon upgrade, and all the tools (screwdrivers) needed to complete the job.

Keep in mind that only the stock SSD that you remove from your Mac works with the Envoy Pro. Placing the Aura inside of the Envoy Pro may damage both the drive and the enclosure.

When using the Envoy Pro, you can simply move your data back over to your new flash drive once the upgrade is completed. The point is, there are many ways to backup and recover your data, you just have to choose the solution that you’re most comfortable using. 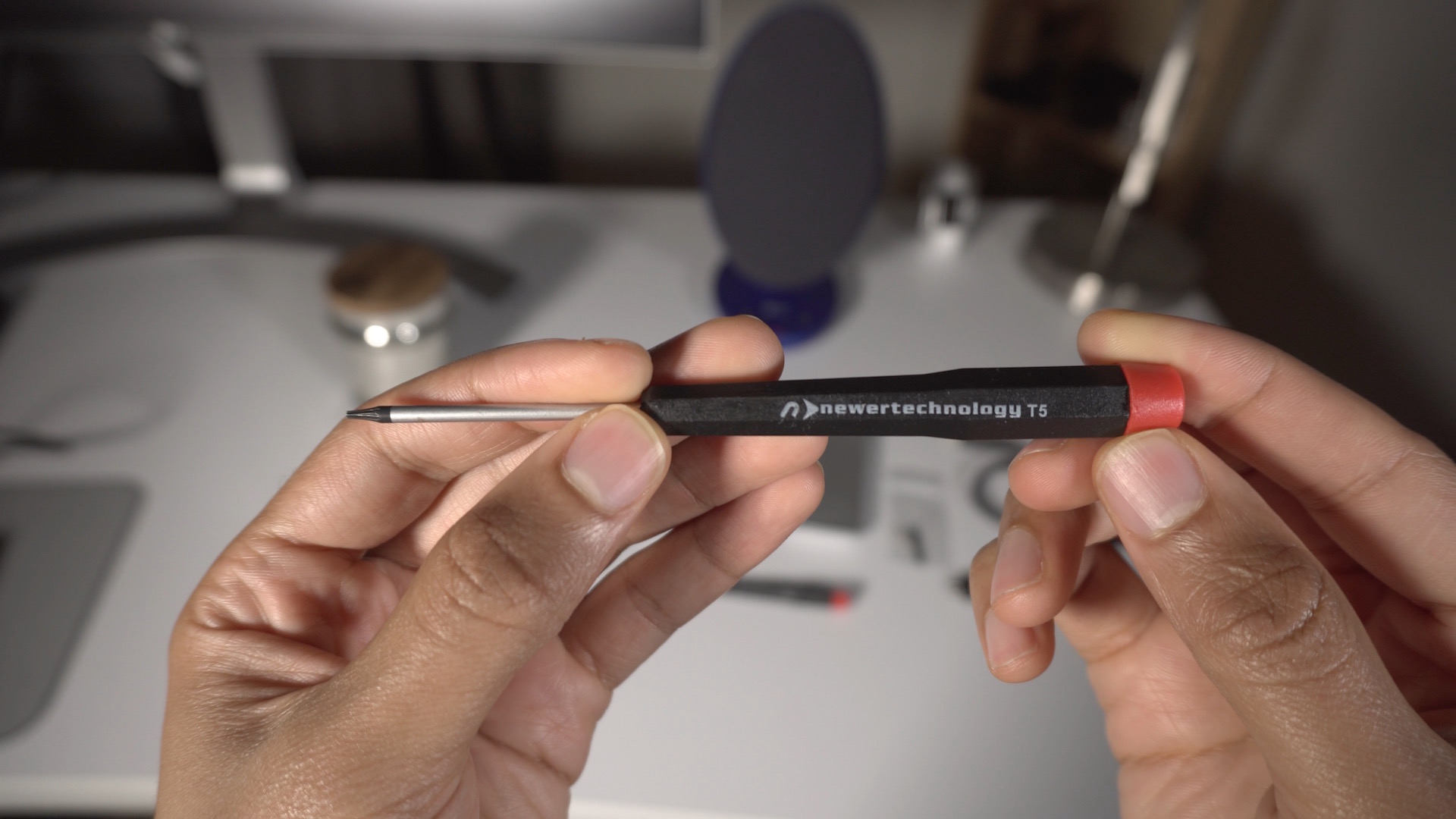 When you buy the Upgrade Kit, OWC ensures that all of the tools necessary to perform the upgrade are bundled with the Aura PCIe flash storage unit. The package includes two types of Torx screwdrivers, the Aura flash storage unit, and the Envoy Pro needed to repurpose the old stock SSD. If you opt for the drive-only, you can purchase the tools separately for only $5.00.

The actual upgrade process couldn’t have been easier. This is helped by OWC’s handy step-by-step videos, which guide you through the entire install process. When it was all said and done, I had my new SSD installed in less than 15 minutes. 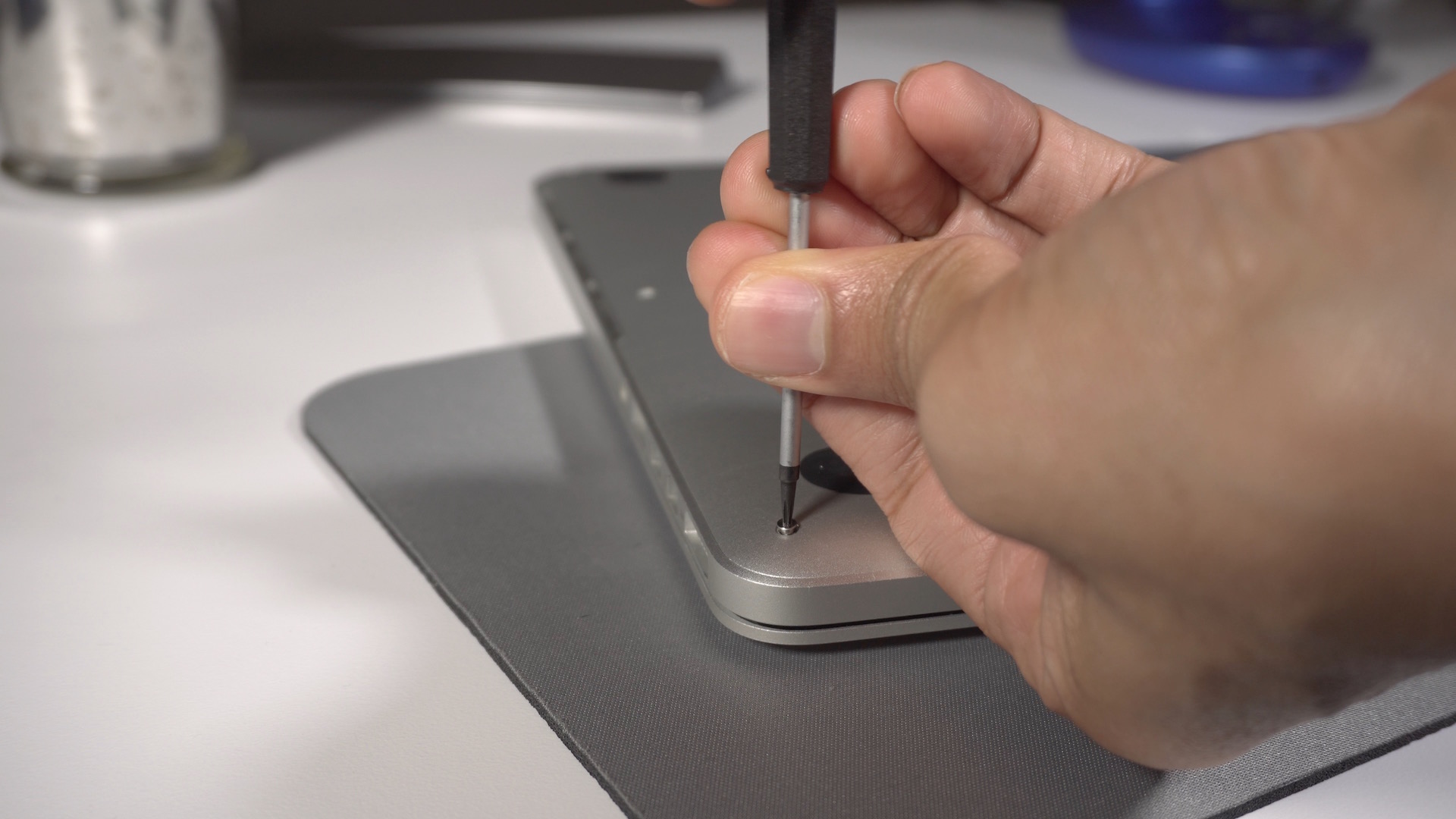 The hardest part of the whole installation was removing the bottom cover of the MacBook Pro. Some of the cover’s 10 pentalobe screws were a little tight. Be sure to apply enough downward pressure on the screws as you turn the screwdriver to make sure you don’t strip the screws. Also, the two screws nearest the hinge are shorter than the other eight screws, so be sure to keep those separate from the rest as you remove them. 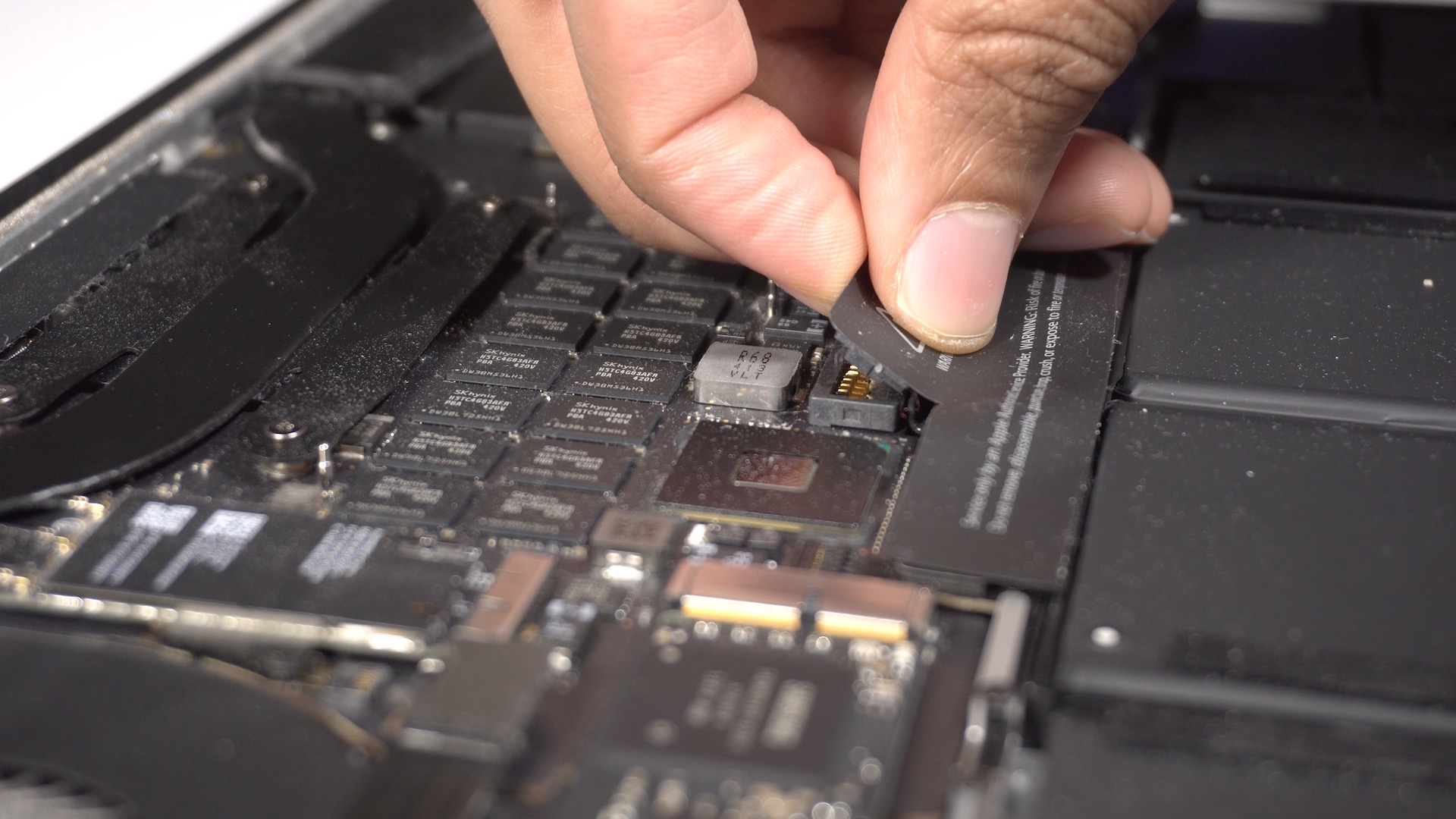 Other than that, the upgrade was a cinch. Once the bottom cover was removed, I disconnected the battery connector, unscrewed the single screw for the stock SSD, and removed the stock SSD. After removing the sticker from the Aura’s thermal pad, I installed the new SSD, screwed it back down, connected the battery, and replaced the back cover. That’s it. 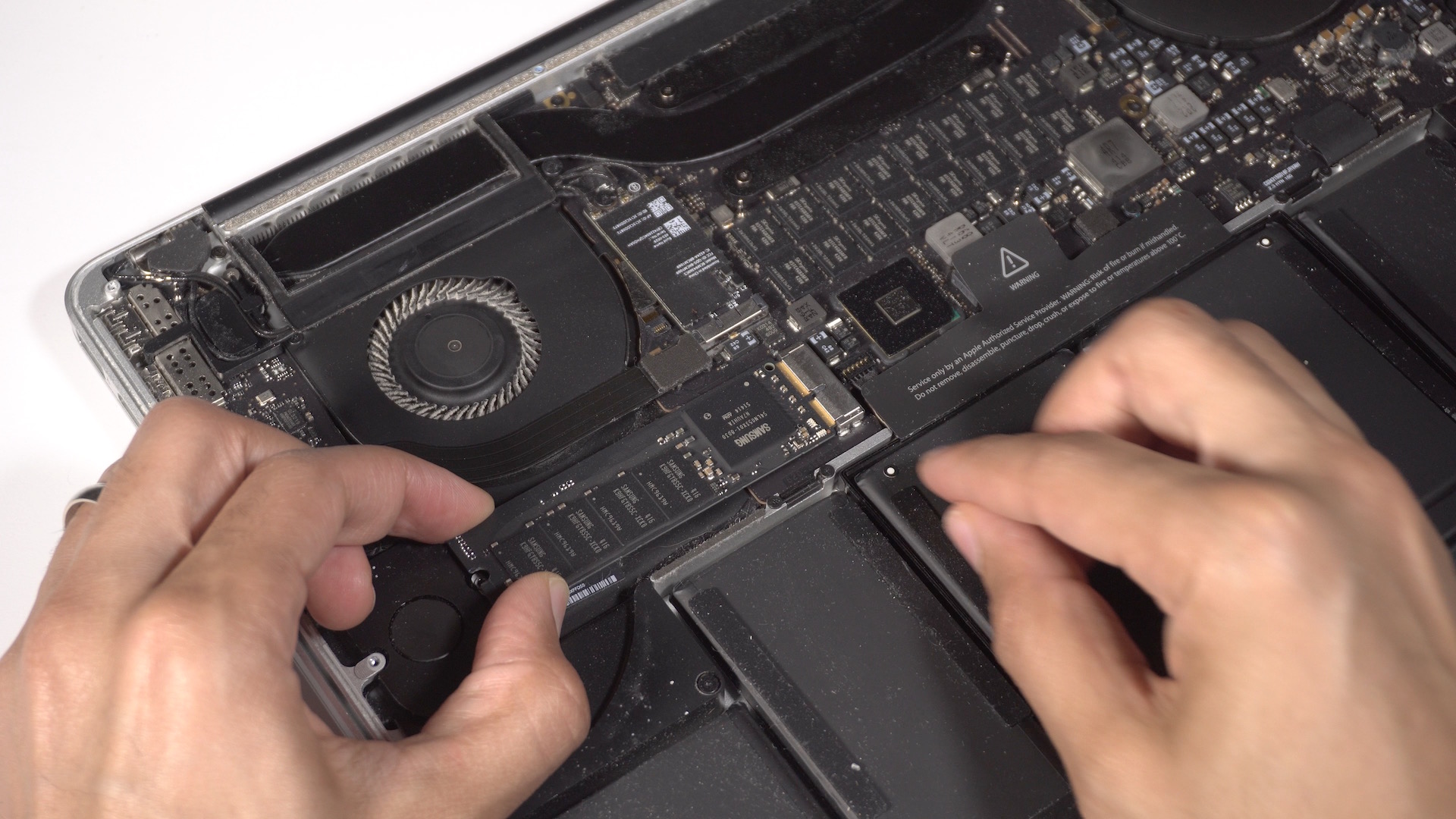 After installation, it was then just a matter of using my handy OS X El Capitan USB startup disk to install OS X. If you don’t have a USB startup disk, you can always go the Internet Recovery route by holding ⌘+R on boot. 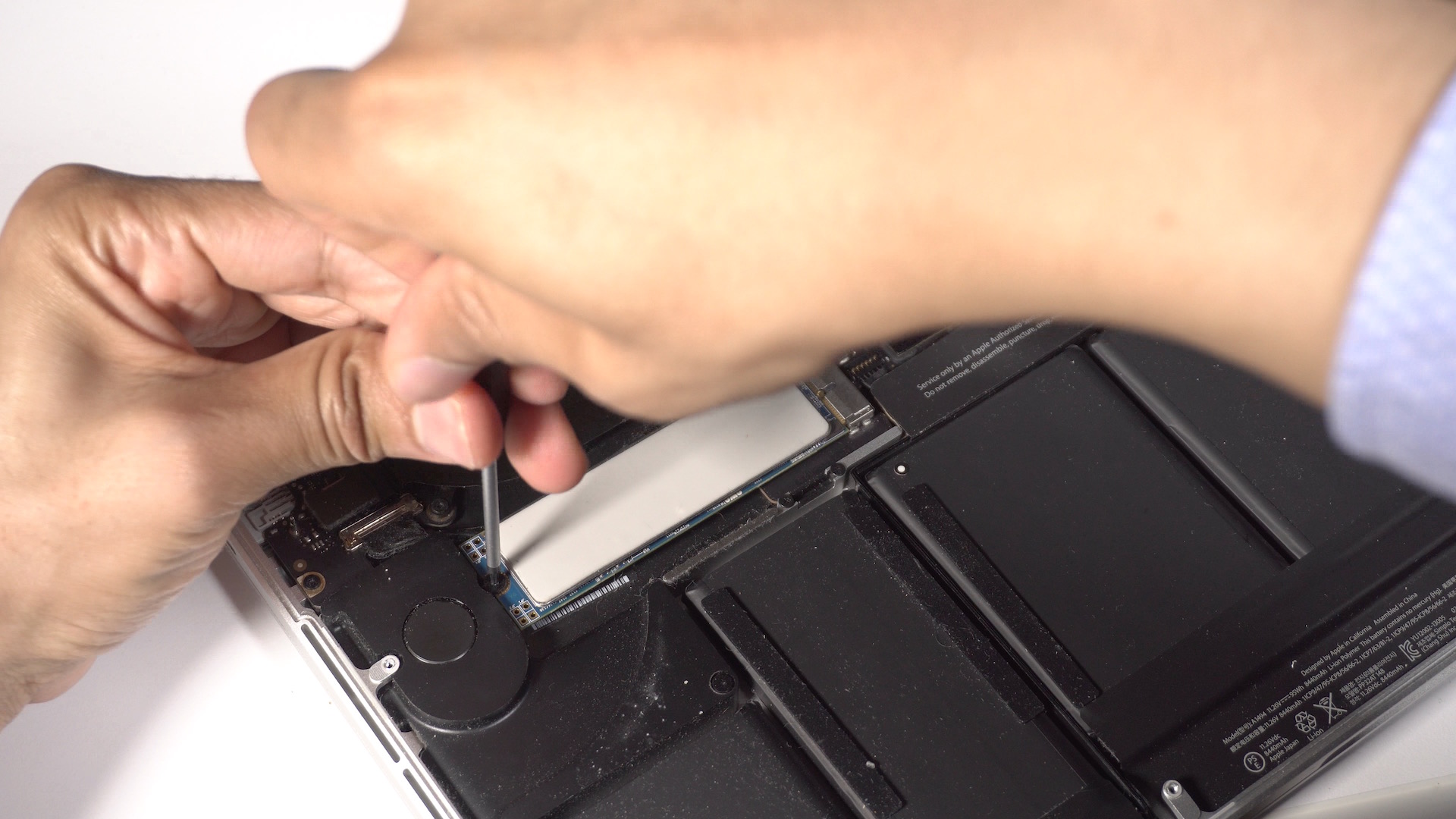 If you opted for the SSD Upgrade package, you’ll also receive an Envoy Pro drive enclosure. This drive enclosure allows you to repurpose the stock SSD that you removed from your MacBook upon upgrade. 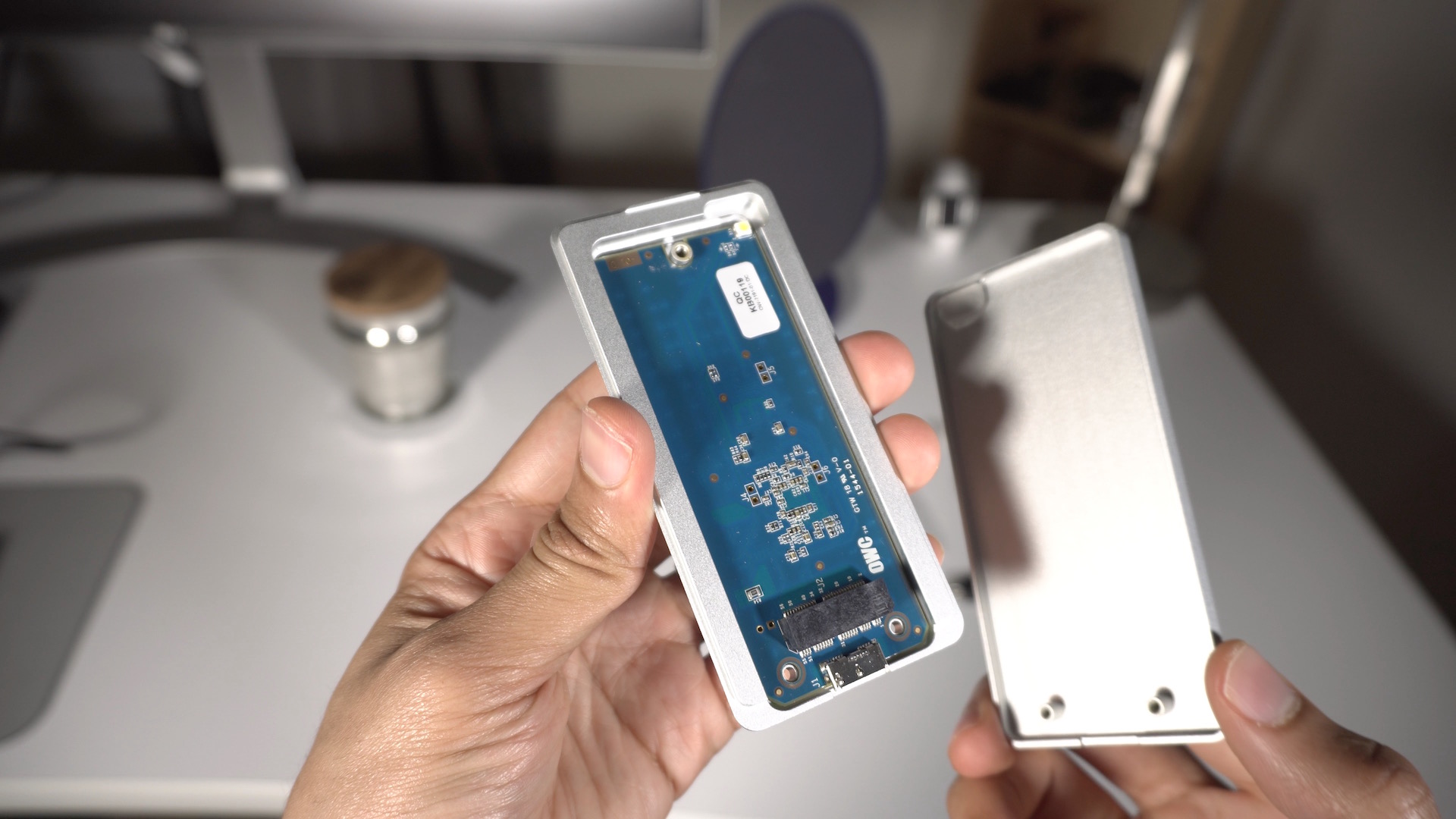 I like the idea of getting the SSD Upgrade package, because it makes it easy to ensure that all of your data from you Mac is backed up, and it means that you can still use the drive that you removed from your Mac.

Installation of the stock drive into the Envoy Pro, like the primary installation, was extremely easy. It was just a matter of sliding the old SSD into the slot inside of the Envoy Pro, and screwing on the cover. 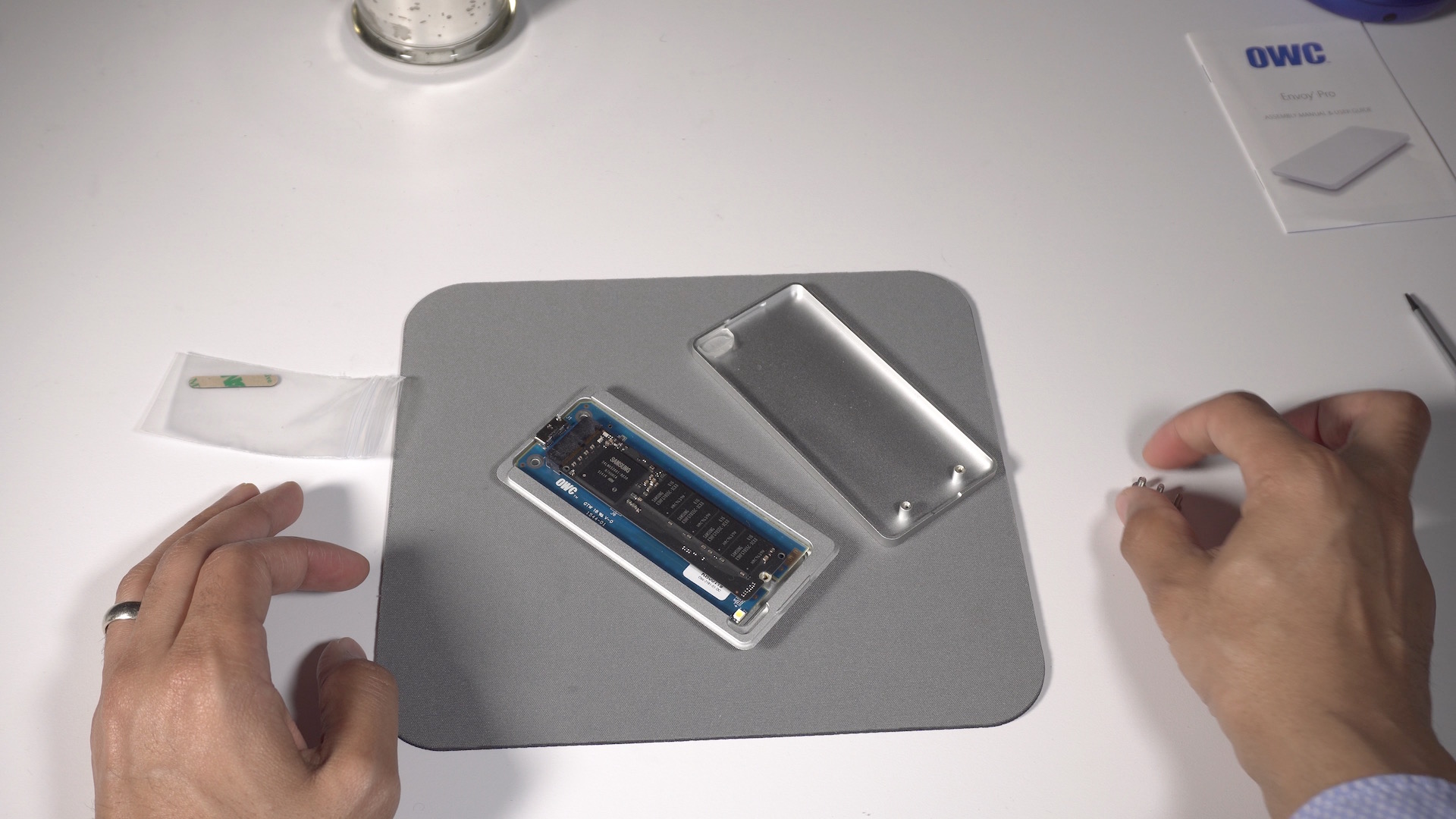 The Envoy Pro ships with a USB cable, and features the high transfer speeds afforded by USB 3. That means that not only is it a fast drive in a general sense, but it makes it easy to transfer your original data back to your Mac if you desire to do so.

After running an extended benchmark using QuickBench, I found the Aura SSD to be similar to my stock 256GB drive for read speeds, but there was a noticeable difference when it came to write speeds:

As you can see, the Aura 480GB PCIe flash drive was slower when it came to write speeds using the extended test in QuickBench. Keep in mind that the newer your Mac, the bigger the performance difference you will encounter, as Apple has made its flash storage faster in later Macs.

If you have an older Mac, then I don’t think the performance hit is that huge of a loss in a tradeoff for more storage. I haven’t fully used the Aura SSD with my video editing workflow yet, but in my short time with the drive, I didn’t encounter any noticeable bottlenecks.

OWC’s Aura drives do not support Boot Camp, so those of you who rely on Boot Camp won’t be able to utilize these drives. If you wish to use Windows on the Aura SSD, it requires direct installation of Windows to the drive. That will be an obvious deal-breaker for those who require Boot Camp support, but it’s a side effect of using this third-party flash storage upgrade solution.

At $347.99 for 480 GB of storage, and $597.99 for 1TB, the Aura isn’t cheap. But keep in mind the amount of R&D that OWC has no doubt poured into this project. This is the only third-party flash storage upgrade solution for these Macs for a reason — it obviously wasn’t an easy (or cheap) feat to pull off.

In this day and age, you can still get the latest 13″ MacBook Pro with 128GB of storage. To go from 128GB of storage to 1TB, it comes at a $1000 premium. Granted, you do get other upgraded specs for that price, but that’s the only path to gain 1TB of storage in a brand new 13″ MacBook. With that in mind, the $347.99 and $597.99 price points from OWC don’t seem as bad. Keep in mind that the Upgrade Kit, which includes the Envoy Pro, adds about an additional $50 to the cost. 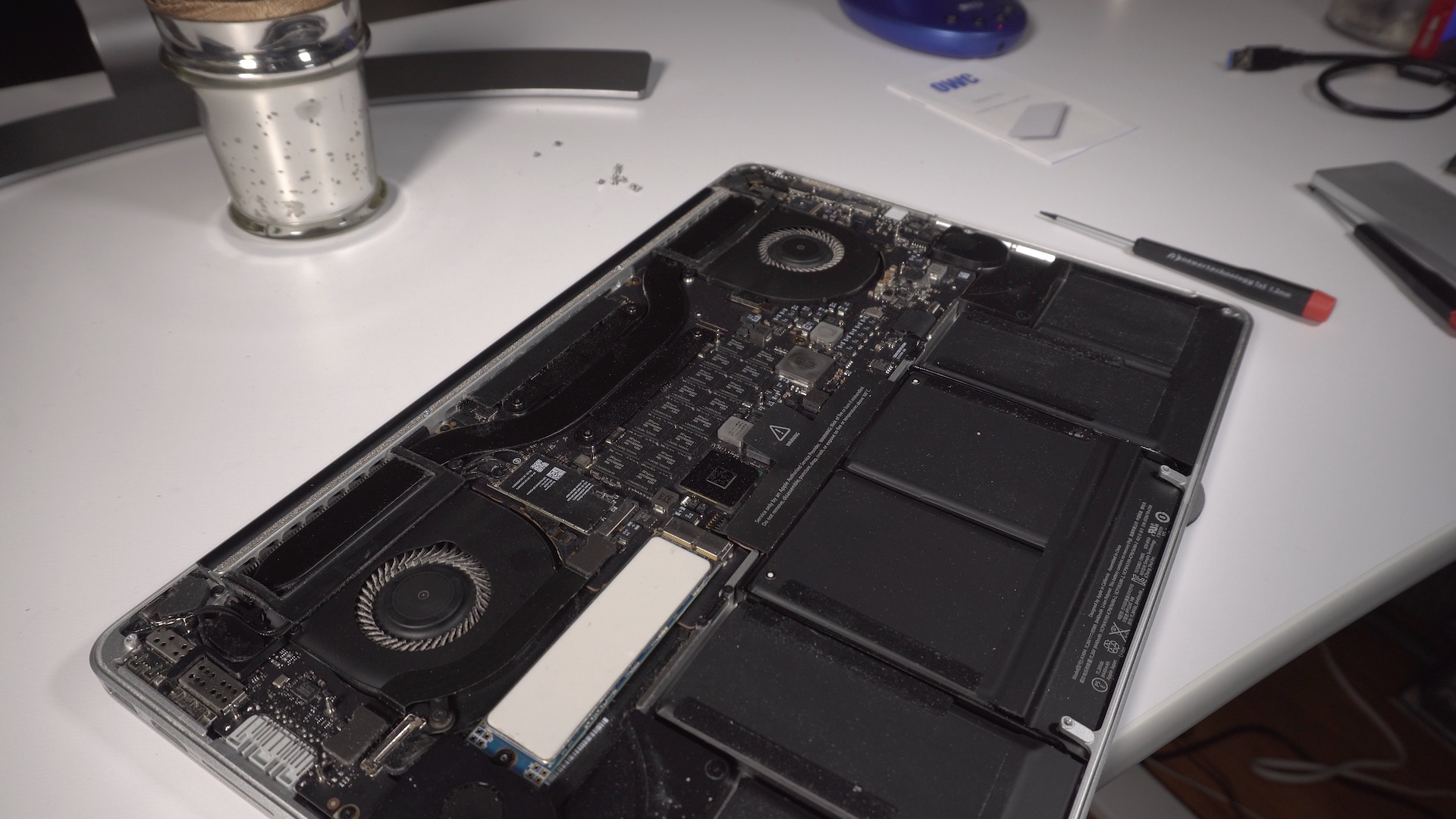 Performance, especially if you have a later model MacBook, may be more of an issue. Earlier MacBooks from 2013 are more on par with the read and write speeds that you can expect from the Aura, but late model Macs feature significantly faster transfer speeds.

Boot Camp support, or the lack thereof, is a showstopper for anyone who absolutely needs to use Boot Camp on their MacBook. Users needing Windows will have to rely on a virtual machine solution, or directly install Windows as the only OS.

As far as ease of use goes, this installation couldn’t have been easier. Most users could probably figure out the install without needing any instructions, but for those who do, OWC has produced a high-quality video tutorial that walks you through the process from beginning to end.

Yes, it’s pricey, and yes the read and write performance doesn’t quite match Apple’s stock offerings, but OWC’s Aura can breath new life into a MacBook that’s struggling with its limited storage capacity.

Update: Windows users rejoice. OWC’s Aura now works with Boot Camp via a Boot Camp enabler utility that was released a few weeks after the Aura debuted. Now you can enjoy the extra capacity of an Aura SSD without sacrificing the ability to use Boot Camp.