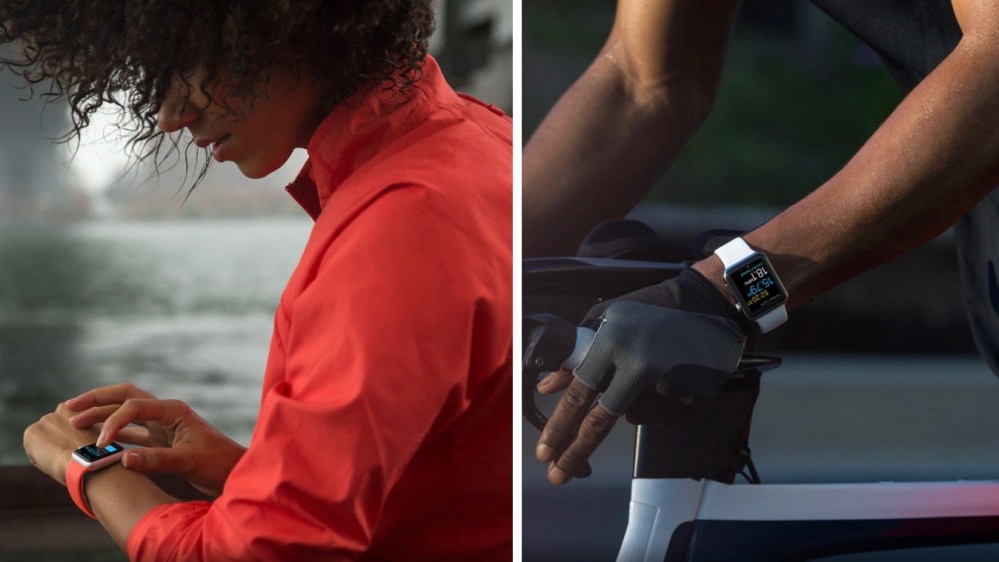 For all of its shortcomings, the Apple Watch has redeemed itself for me with its fitness and health tracking features. I wear it primarily because it’s a watch but I like (the idea of) having Siri always there plus access to important alerts instantly. The sports watch part can be ignored if you’re not interested, but being one device means its still there if you decide to explore activity tracking later.

That’s been my experience. I generally ignored activity tracking for the first year, but decided at the end of March to use the start of April as a reason to pay attention. The Activity app uses week- and month-long streaks to mark achievements, so the start of a new month (like today) can be motivating.

My real goal was to lose weight using Apple Watch as a motivator. Two months in, I’ve been very happy with the results so far and have to give Apple Watch plenty of credit for pushing me forward. My routine also involves iPhone apps, smarter food choices, and some basic equipment, but closing the Activity rings is the most compelling part.

What Apple Watch does is encourage you to move more, take breaks from sitting throughout the day, and exercise daily for at least half an hour. The workout part takes the most effort because Apple Watch uses a heart rate sensor and other data to determine what’s actually exercise. You close your Activity rings when you burn your personally set goal of active calories, stand for at least one minute during 12 different hours, and complete 30 minutes of exercise.

After starting a streak on April 1st, closing those Activity rings each day has been the biggest motivation to keep up my new routine. I missed two days near the end of April when I was under the weather, but picked back up and haven’t missed a beat in 42 days.

Closing the Activity rings is rewarding, but actually seeing results has also been a big reason to keep going. Apple Watch revealed one thing for certain during year one: my lifestyle is generally pretty sedentary throughout the week. If I don’t make an effort, I can easily go a whole day and only burn 150 active calories.

I weighed in at 211 pounds on April 1st, then exercised for half an hour and decided 500 active calories a day was reasonable for me to start based on what I burned during the workout and throughout the day. After a month of sticking to it, I weighed at 196.6 on April 30th and felt way more energetic.

First month of sticking to Activity rings (save for couple of bad days) ⌚🙂️ pic.twitter.com/EgENZlHeZ7

For the exercise part, I used a fancy NordicTrack elliptical that I bought off Craigslist for $400 last October but only used a few times until April. Half an hour can be hard to find on a lot of days, but Apple Watch doesn’t require working out all at once to close the exercise ring. The achievements do reward completing at least seven workouts of at least 15 minutes each week, though, so 15 minutes in the morning before work and 15 minutes in the evening after work is usually possible.

This is where building a streak helps. Once you add exercising into your daily routine, it just starts to feel like anything else you do everyday. Working out still feels like work a lot of the times, but going through my Reading List on Safari with my iPad or playing a podcast or music helps a lot. 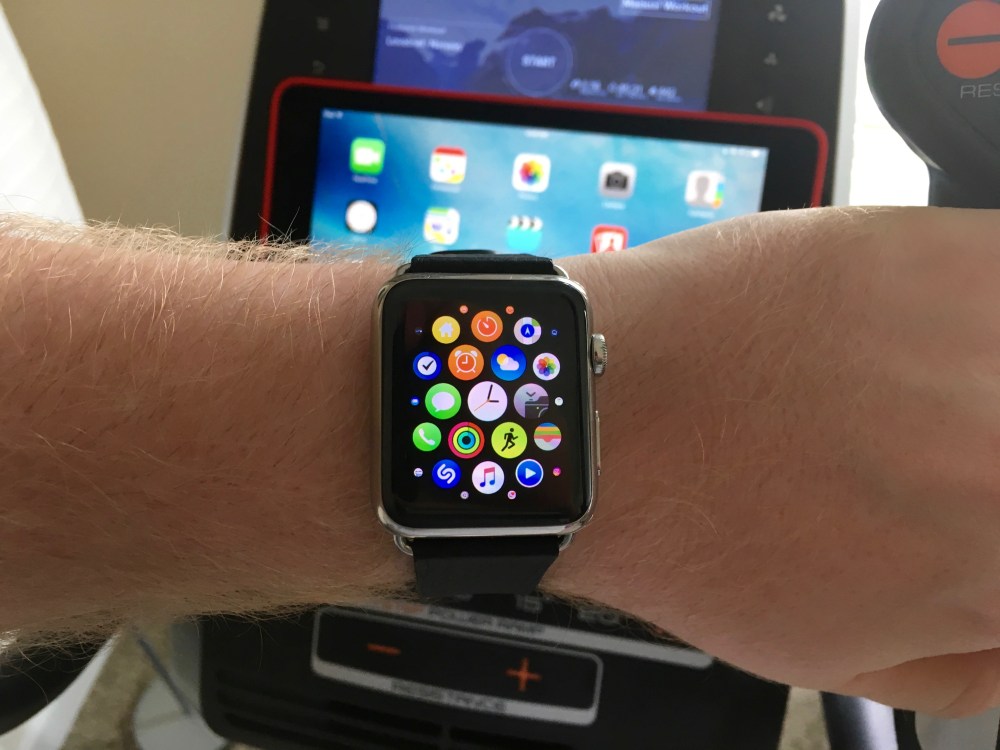 Apple Watch has been a big motivational coach, but I’ve also used a couple of iPhone apps to help along the way.

After a week of exercising, I wanted to eat better too so my effort wasn’t wasted. For the first time ever, I just stopped eating fast food and drinking soda (I even switched from sweet tea to unsweet tea which is not the default in The South and starting drinking coffee black).

I also changed my eating habits. I used to almost always skip breakfast, work past lunch but snack all day, then pick up fast food or snack more before dinner. Now I start most mornings with yogurt for breakfast, a sandwich and crackers for lunch, and and healthier dinners in the evening without fast food.

I’ve also used MyFitnessPal for iPhone to log nutritional data and mostly stay within a daily goal. This has made me a lot smarter about food choices in general without doing anything radical. The cool part here is that the app puts a ton of nutritional data in the Health app just by scanning food barcodes, and it’s easy to log meals you have often. 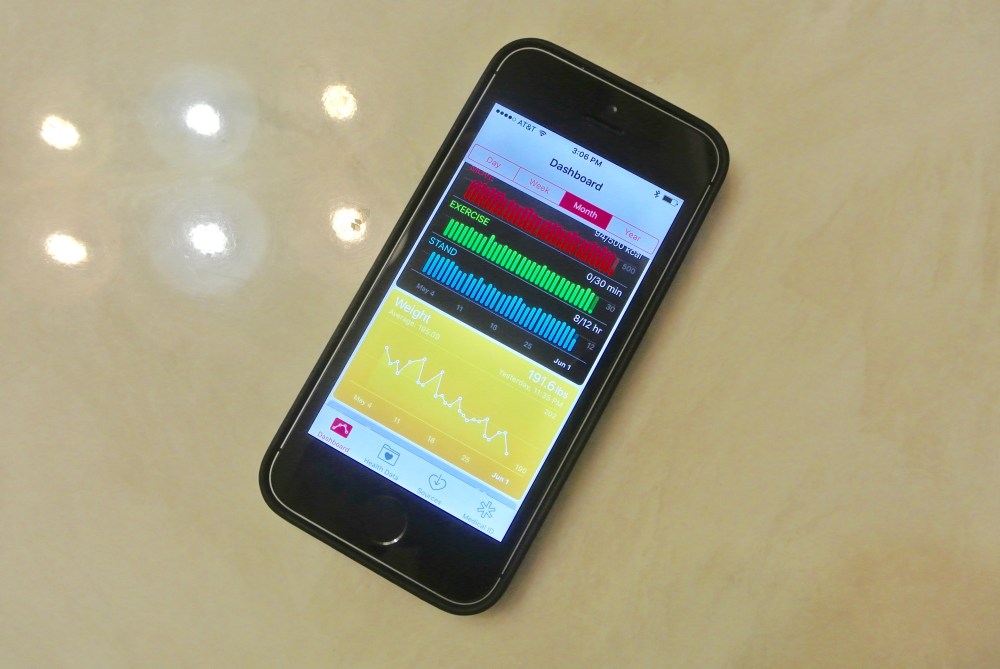 The app also subtracts active calories from your daily goal based on what you burn during exercise that Apple Watch measures, so you can have a calorie goal of 1800 but eat 2000 calories, then burn 300 calories during exercise and still be 100 calories under your goal in the app. The trick here has been to not be hard on myself if I go out to dinner and miss my goal one or two days out of the month; it’s the Activity rings on the Apple Watch that I obsess over.

For tracking weight, I’m relying on a pretty basica solution: a sub $20 scale and Apple’s Health app. Smart scales exist that automatically log weight over Bluetooth, but they’re pricier and I wouldn’t want to spend extra time with the process. Instead, I weigh daily whenever I remember, then manually add weight to Apple’s Health app on the iPhone. Health will also calculate BMI if you have your height saved as well. I still don’t think Health is a great app, but it gets the job done and shares what I put in with other apps like MyFitnessPal. 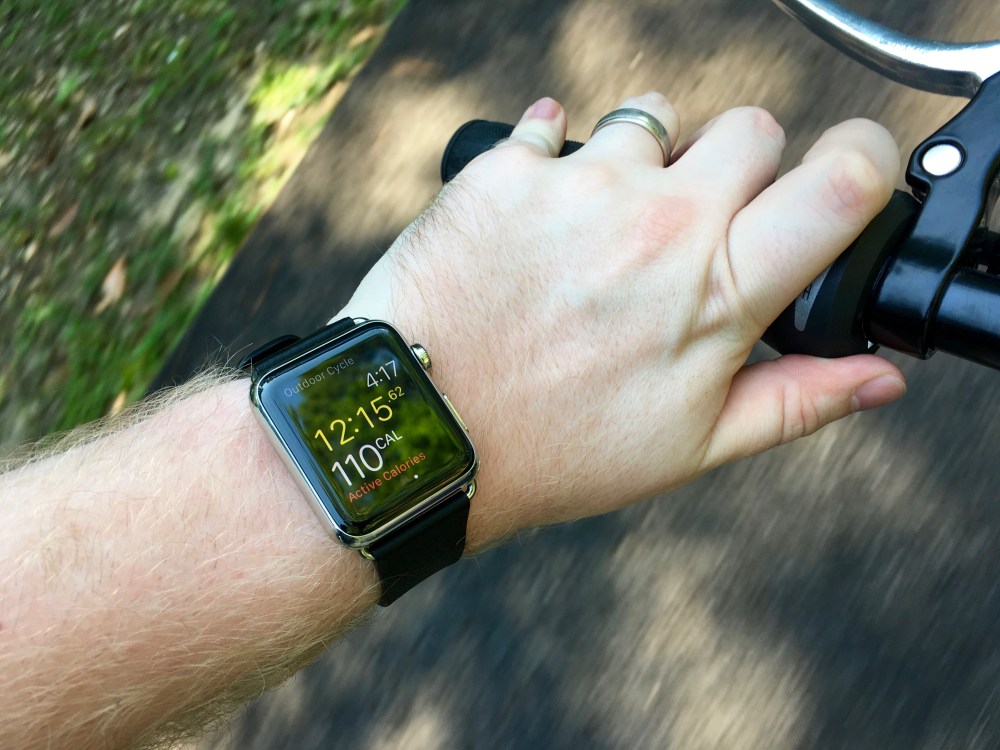 The same daily exercise routine can get boring though. My wife also recommended that I take a break from the elliptical at least once a week to avoid injuries. I’m definitely not a runner and I find it difficult to achieve 30 minutes of exercise with an outdoor walk (Apple Watch is picky here), plus 90º heat with 80% humidity outside isn’t particularly inviting. So over the weekend, we bought bikes for our family and I’ve added cycling into my list of activities.

I talked about this on the Happy Hour podcast this week: I was worried that 30 minutes of cycling wouldn’t equal 30 minutes of exercise to the watch, but the activity seems to be engaging enough that it totally counts minute for minute. What’s even cooler that I didn’t know is the Workout app will show you how fast you’re cycling as you ride so you have a speedometer on your wrist. The Activity app on the iPhone will also show you your average speed after you cycle and break down your average speed for each mile as well.

I added cycling to my mix near the end of May, but the month also marks the first time I got the Perfect Month achievement in the Activity app (two days short in April). It’s a bit silly since the “achievement” is just a digital medal, but for me it’s symbolic of a lifestyle change that’s making me feel better and hopefully be much healthier. It’s also fun to compare with other Apple Watch owners that are way more accomplished than me.

First time hitting move goal all month (and everything else) 🙂⌚️ pic.twitter.com/BDO0lcYCck

It has also been encouraging to track my weight daily then see the changes month to month. This morning I measured 191.4 pounds, which is a new record low during this process. Naturally, the day to day measurement changes, but the overall trend is one I’m happy with and will keep working to improve.

Exercising and eating better is the activity that’s delivering results, but even after two months I’m not sure I’d be comfortable with the effort without the data from Apple Watch. Just wearing Apple Watch won’t make you healthier. I proved that during year one.

But if you have a goal and find the motivation, Apple Watch can go a long way with pushing you forward by quantifying your effort and nudging you when you slow down. I have a better sense of what works, how much each activity is worth, and when it’s OK to call it a day.

There’s a lot more to say on the topic and plenty more progress to be made toward my goal, so consider this a checkpoint … see you in 30 days. In the meantime, share your own experiences below.