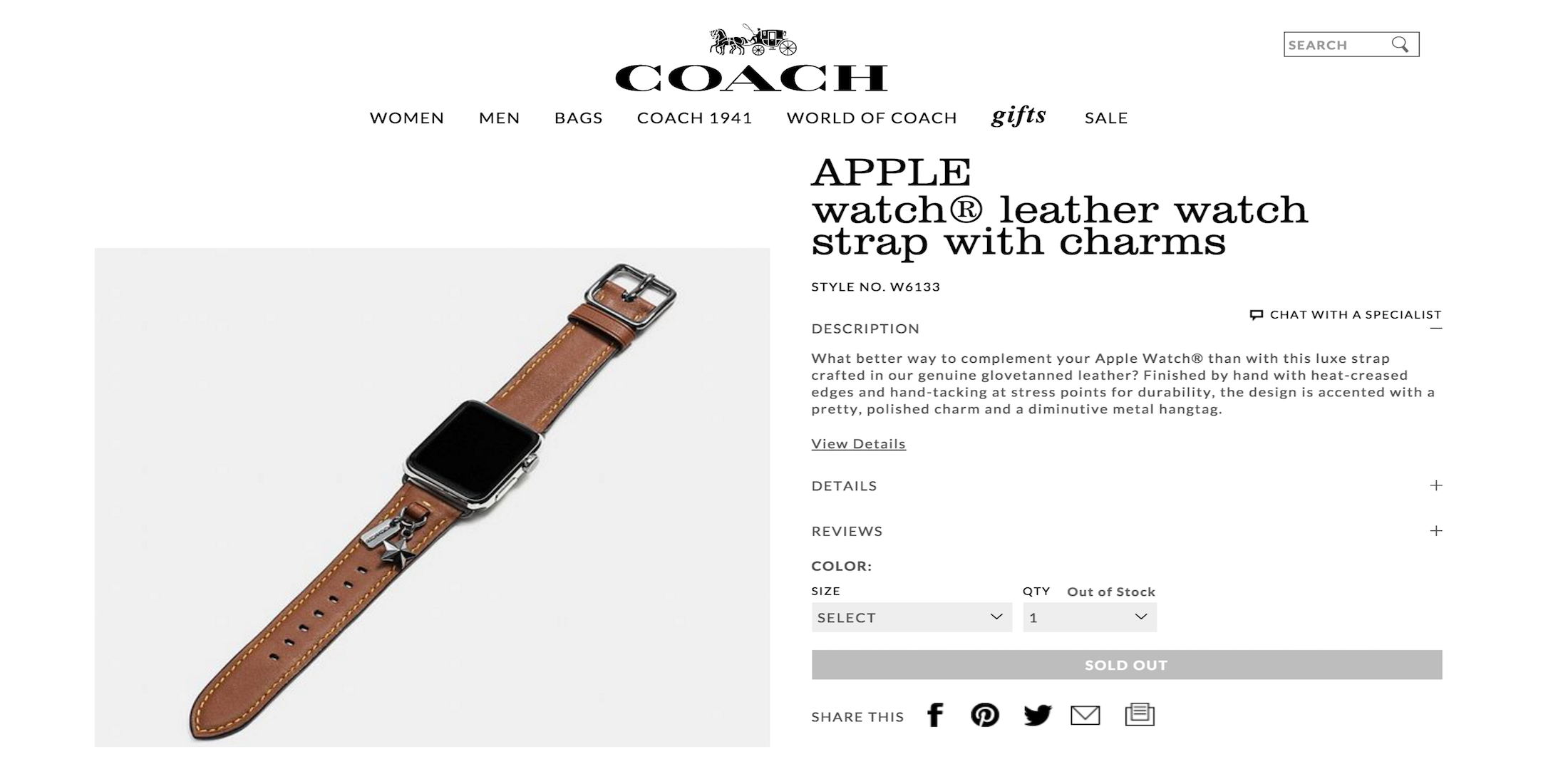 Some spy shots of upcoming Apple Watch bands by designer brand Coach leaked last month, but now the accessories are about to get official as Coach lists the products on its website.

The source of the original leak shared a URL to a not yet public listing on Coach’s site today, and we discovered product pages for several other models being prepared. The pages aren’t yet searchable on the site, and most don’t have images, but it looks like Coach is preparing for an upcoming launch ahead of Apple’s WWDC event later this month.

The model pictured above is a Glovetanned leather option with metal charms:

What better way to complement your Apple Watch® than with this luxe strap crafted in our genuine glovetanned leather? Finished by hand with heat-creased edges and hand-tacking at stress points for durability, the design is accented with a pretty, polished charm and a diminutive metal hangtag.

By doing some URL digging, we found a listing for a “tea rose” model that’s “finished with die-cut leather blooms, each one debossed, printed, edge-painted and affixed by hand with a custom rivet.” Another listing describes a “wild beast camo” model with a “very beastly camo print on fine-grained calf leather.”

Showcase your Apple Watch with this smart new strap, created specifically for the do-it-all gadget. It features our very exclusive, very beastly camo print on fine-grained calf leather, finished by hand and accented with custom hardware.

From the previous leaks we know Coach has a whole lineup of color options planned. Some of the Coach bands, like the one pictured above, will come with a metal hanging charm, something the designer is featuring on some of its other product collections currently. A report last month that originally leaked some spy shots claimed a price point of around $150 for the bands, but it’s unclear if all models will be priced the same.

The product listing looks like it hit Coach’s website a bit early, with the image of the bands only appearing for the one model pictured above. The straps are currently listed as “Sold Out” and don’t show a price, so it appears Coach is preparing the listings behind the scenes for an upcoming launch.

WWDC 2016, Apple’s developer conference scheduled for June 13-17 later this month, would of course be the next likely venue for product unveilings. Apple isn’t expected to unveil a new model of Apple Watch, but it could use a bit of stage time to show off new accessories and bands for the device alongside watchOS updates. Apple has partnered with other designer brands for similar collaborations including bands from Hermès available both bundled with Watch models and separately.

Update 06/01/2016 8:12AM PDT: After speaking to a Coach representative, we’ve learned that the bands should begin arriving to Coach stores on June 6th. The bands have been confirmed to be priced at $150, though sizing is still a mystery. The representative explained their inventory system listed everything under the “womens” category, so exact Apple Watch sizing (38mm or 42mm) is not yet known.

Update 06/06/2016: A closer look at the upcoming lineup as Coach pushes back the launch from today until the 12th: 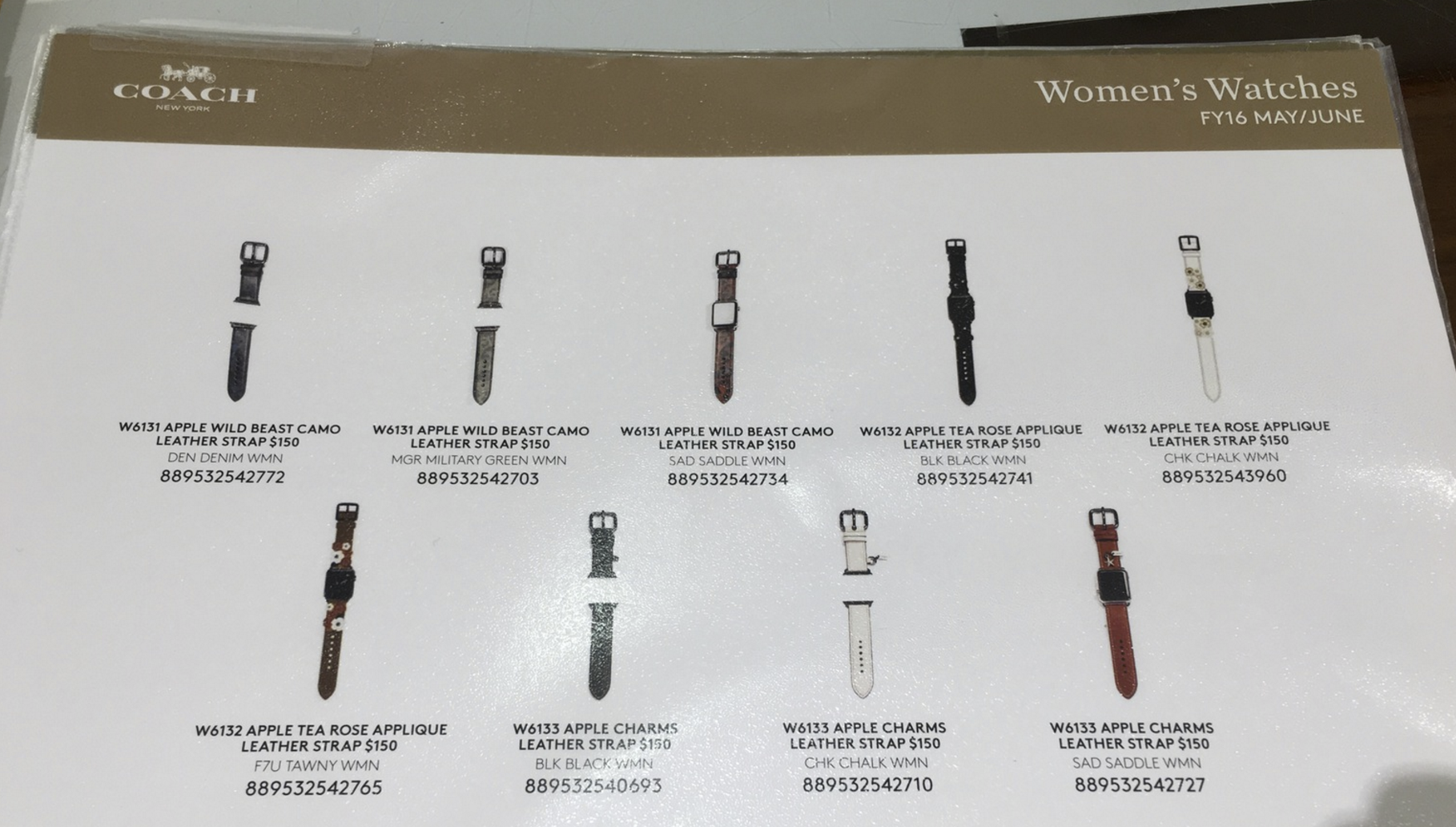