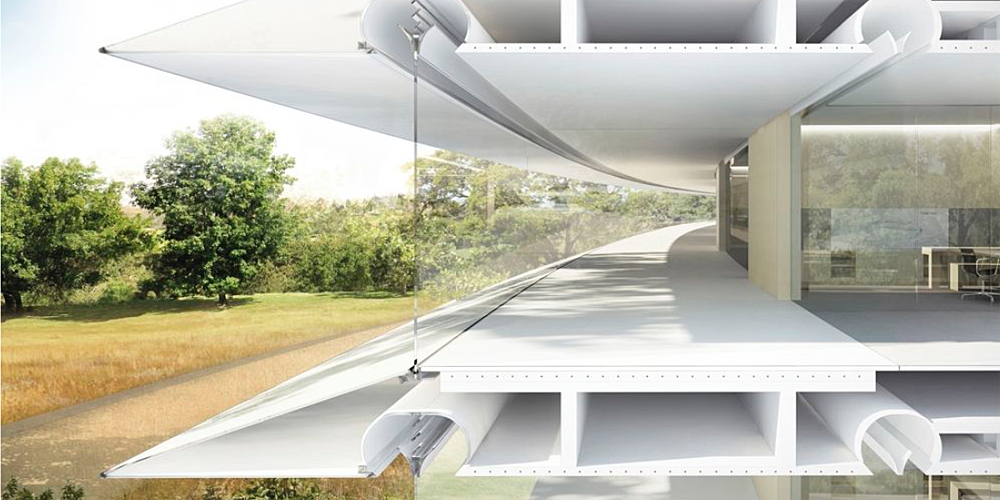 We’re following construction progress of Apple’s Campus 2 via a series of drone videos and renders, but Popular Science got invited in for a closer look at some of the unique features of the building.

The piece starts out with some stats, among them that there are around 3,000 sheets of glass, the heaviest of which weighs 7000 pounds. And it’s the glass that’s been one of the great challenges of the project …

Using what Apple says are the world’s largest pieces of curved structural glass isn’t the easiest way to construct a workplace. But that’s what the computer company finds itself doing here. To build these sweeping panels, Apple could rely only on Sedak/Seele: the glass manufacturers behind the flagship Apple Store on Manhattan’s Fifth Avenue and the George Street store in Sydney, Australia. The German firm was tasked with fabricating glass panes between 36 and 46 feet wide at a length of 10-and-a-half feet.That’s over twice the length of the largest standard pane.

Manipulating glass into a curved shape is typically done during the tempering process. But this does not always result in a crystal-clear panel. To preserve clarity, the glass gurus tried something else. “We curved the glass during the final step of lamination,” says sedak/seele managing director Nelli Diller, “right after heating it to 600 degrees Celsius (1,112 degrees Fahrenheit) to strengthen it.”

Apple also insisted on the highest manufacturing standard ever achieved when it came to the exact sizes of each piece of glass.

The best glass today has a 1/8-inch tolerance, meaning it can be 1/8-inch longer or shorter than specified. But Apple’s glass was designed with even closer precision:a 1/32-inch tolerance.

The concrete slabs, too, are no ordinary ones.

Campus 2 uses custom concrete slabs which are designed with large, hollowed out middles, allowing the building to “breathe” on its own. This self-ventilation “largely removes the need for conventional cooling methods.”

The campus is expected to generate 75% of its own power from a mix of solar panels and biogas fuel cells. The balance of the power needed will be bought in from First Solar, so that the building is powered entirely from renewable energy.

The campus is larger than it might look from the renders, which show the four stories above ground but not the additional three floors below. Check out the video tour below.