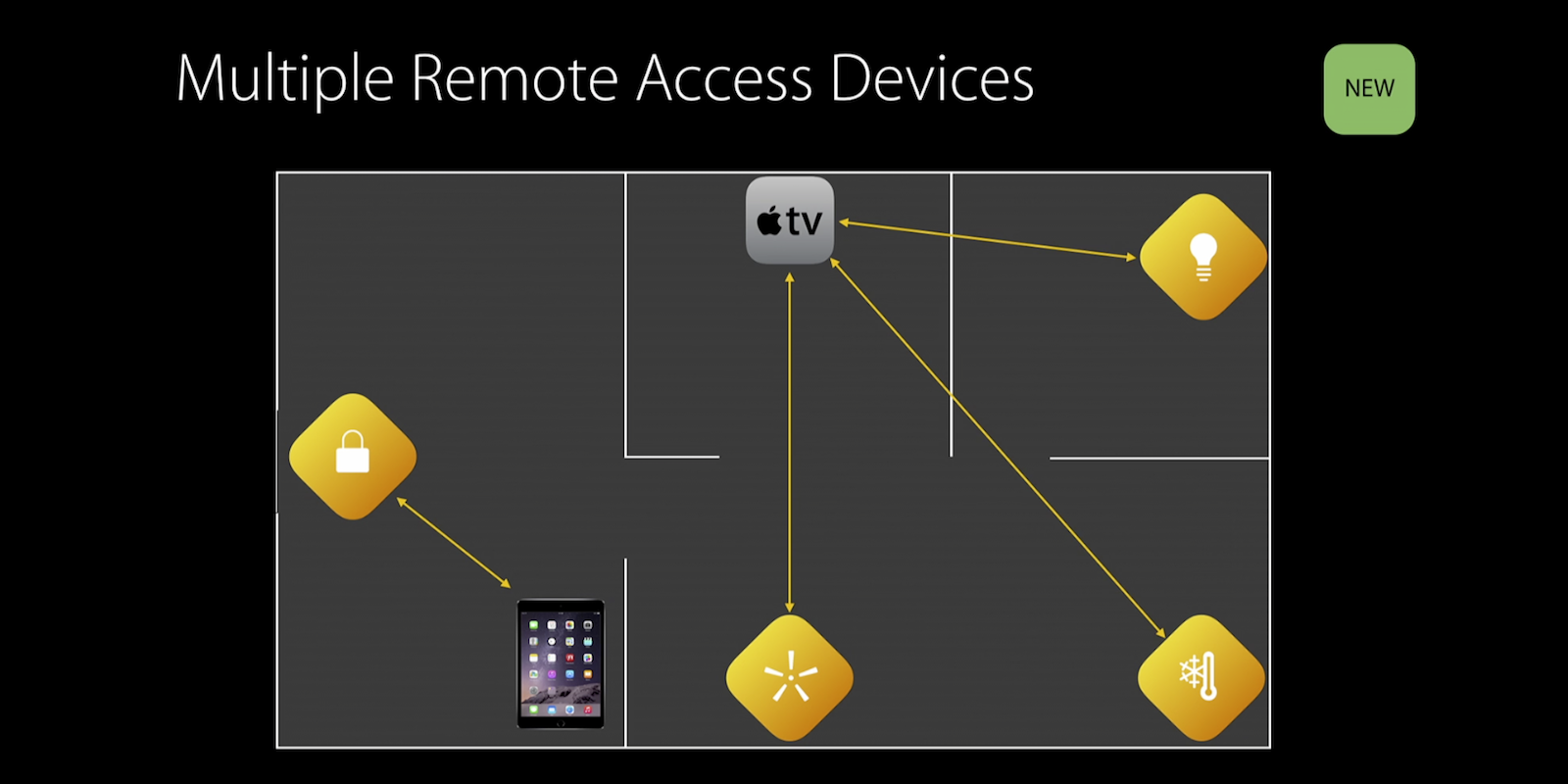 Before now, Apple’s HomeKit platform required an Apple TV for remote access control of most accessories. If you had network-connected lightbulbs or other home automation accessories, you’d need to have a new Apple TV connected to that same network to control them with Siri when out of the house. With iOS 10, Apple is giving iPad that capability too, and it’s now using multiple remote access devices to make all of your iPads and Apple TVs work together to extend your HomeKit network.

That means you won’t need an Apple TV for remote HomeKit access if you leave an iPad at home connected to your Wi-Fi network. And if you happen to have both an iPad and Apple TV (or multiple), they will automatically work together with iOS 10 and tvOS 10 to improve reliability and speed of the HomeKit accessories you’re controlling remotely. (as highlighted in the image above).

HomeKit is receiving other related improvements that Apple didn’t highlight on stage. In addition to the new apps and features for iOS 10 and watchOS 3 that Zac went hands-on with yesterday, Apple TV and now iPad are gaining the ability to handle automation for HomeKit, including event and time triggers, providing a more reliable experience if the user happens to be away from the home network for an extended period of time. Apple’s new sunrise/sunset automation trigger in HomeKit, for example, would presumably run more reliably if that automation is trigged from the iPad or Apple TV on the home network as the time of that event could change based on time zone while you’re traveling.

What else is new?

Zac’s walkthrough of the new HomeKit apps and features for iOS 10 and watchOS 3 is a good rundown of HomeKit’s makeover arriving on iPhones and Apple Watch this fall. You can also expect to see HomeKit enabled Apple TV apps arrive soon as app developers now have the ability to view HomeKit configurations, control accessories, execute scenes, and tap into Siri while doing it.

For the new remote access support for iPad, everything is supposed to work automatically with iOS 10, so you shouldn’t have to set up anything as long as your iPad and/or Apple TV is connected to your home Wi-Fi network.