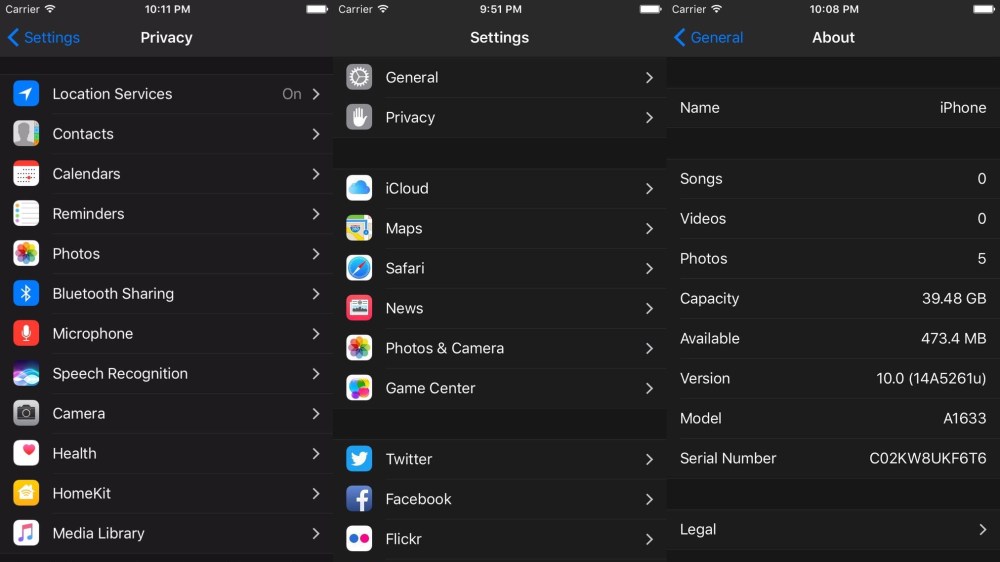 The same developer who found the original iOS 10 Dark Mode references in the Messages app, Andy Wiik, has found even more evidence that Apple was/is developing a black appearance for its iPhone and iPad operating system. The latest screenshots show the iOS 10 Simulator presenting the Settings app in a dark interface style, with black cell backgrounds and white text.

The screenshots are captured from the iOS 10 Simulator where it is easier to inject code and discover unfinished flags and behaviour, like this Dark Mode interface style …

There were some rumors that Apple was developing Dark Mode for iOS 10 ahead of WWDC although Apple did not announce any such plans at the conference for iPhone and iPad (it did unveil Dark Mode for tvOS on Apple TV).

Dark Mode is not only a hugely-requested user feature, it also synergizes well with OLED screen technology. Apple’s 2017 iPhone is expected to feature an OLED display for the first time next year. Apple’s iPhone 7 — launching later this year — is supposed to look very similar to the iPhone 6s and will continue to use LCD display technology.

OLED screens have high contrast ratios making them well-suited for dark UI; OLED pixels are also significantly more power efficient displaying black colours than light ones. This means that Apple has good reason to eventually include a Dark Mode into iOS even if not this year.

Announcing the new theme ahead of the hardware would give the developer community ample time to update their apps — but that doesn’t seem to be Apple’s plan. Perhaps the work-in-progress Dark Mode found by Wiik is destined for public release with iOS 11.

iOS 10 features things like a Siri SDK for third-party apps, many new iMessage features including stickers and bubble effects, a revamped Apple Music app, lock screen widgets and much more. iOS 10 ships in the fall for the public.