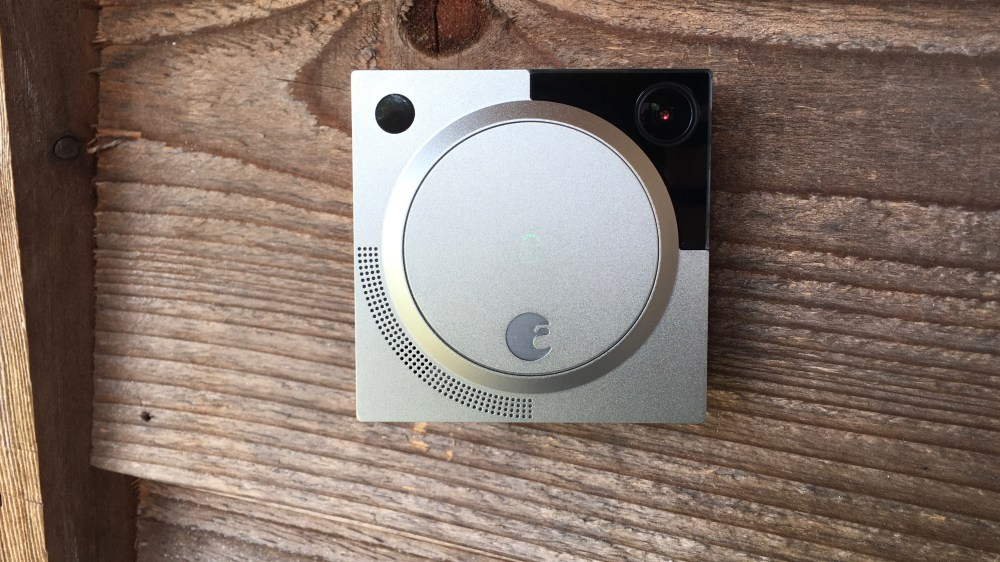 Smart doorbells are an interesting category of connected appliances. There’s an undeniable cool factor in bringing your home to the Jetsons era when you add a video camera, mic, and speaker to your doorbell. I’ve been testing the August Doorbell Cam ($199), which replaces your existing doorbell and lets you see and communicate with visitors from your iPhone, and it’s not just the smart doorbell features that have interested me…

August Doorbell Cam works like a traditional doorbell, but adds several modern features that make it much more useful than your average doorbell. There’s a one-way camera that lets you see your visitor without opening the door or even being home, plus a microphone lets you hear your visitor on your iPhone and you can communicate back through the speaker on Doorbell Cam. And if you have the August Smart Lock, you can easily unlock the associated door from the iPhone app and let your guest inside.

The installation process isn’t too difficult either. I started by turning off the breaker that sends power to the front porch, then removed a couple of screws to take down my old doorbell. Doorbell Cam required screwing in a base panel which put a few new holes in the wood, but the existing wiring from the old doorbell worked for the installation. Flip the breaker back on and we’re in business.

There are two base panel options when installing Doorbell Cam too. The setup guide recommends which to use,  a flat panel or an angled panel. I opted for the angled panel to aim the camera toward the visitor and not straight on based on my doorbell placement.

There’s an iOS app to keep on your iPhone that helps with the setup process. Doorbell Cam joins your Wi-Fi network then works remotely. You can also invite your family members to have access or receive alerts when you have visitors. When a visitor presses Doorbell Cam, your existing doorbell chime in your home sounds plus you receive a push notification on your iPhone that lets you jump into the August app and see your visitor. You can hear your guest through the app and optionally let them hear you with a push-to-talk button. 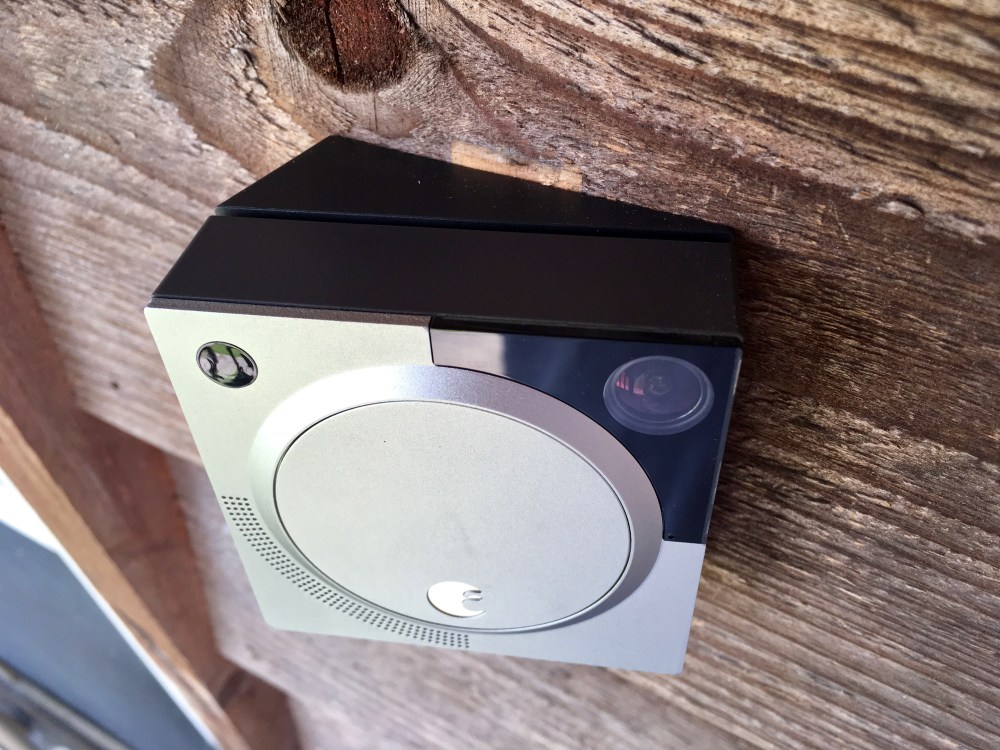 In practice, there’s a slight delay when communicating that may be more noticeable on slower Wi-Fi networks but isn’t a showstopper on decent connections. I did find cellular connectivity to be especially slow in my usage compared to Wi-Fi connectivity, but this also likely varies based on network conditions. While you get can get that awkward overlap when speaking back and forth, you probably won’t be holding long conversations anyway and it works for the quick interactions you may have.

Doorbell Cam lacks features that could make it double as a dedicated security camera, but I have found it useful for just checking in on the house when I’m away. You don’t get a backlog of recorded video, only a live feed when you open the app, but August says an update coming to the mobile app will send alerts when motion is detected even if the visitor doesn’t ring your doorbell. Also keep in mind the need for an active Wi-Fi connection to view the live video feed. August also says video interaction recordings will be added in the future, but for now missed and recent calls are limited to a freeze frame screenshot.

The August app situation for Doorbell Cam is mixed but mostly positive. The same iPhone app controls Smart Lock and Doorbell Cam. When someone rings your doorbell, you receive an alert on your iPhone that lets you jump right into the live video feed where you can see and hear your guest and optionally speak to them. Smart Lock owners can also lock or unlock an associated lock from this screen.

Doorbell Cam lacks night vision, though, so you’ll need to supply your own lighting after sunset or you won’t get much mileage. My home setup includes a Philips Hue bulb that I can turn on from my iPhone if needed without being home or going to the door. In testing, I found that Doorbell Cam works especially well at night with the outside light on. During bright weather, Doorbell Cam can struggle to highlight the visitor and instead focus on the bright scenery. This will vary by situation but it’s something to consider.

August offers an Apple Watch app, but its functionality is limited to locking or unlocking August Smart Lock (although Apple Watch catches August Doorbell Cam alerts). August also lacks a dedicated iPad app for now so you have to rely on the scaled up iPhone version but it’s fully functional.

As mentioned before, Doorbell Cam’s video quality will likely vary based on your environment. My front porch is covered and shaded so Doorbell Cam also captures the open environment which further darkens the space directly around it. Placement is also important. Standing directly in front of my door puts the visitor somewhat out of site, but offers enough detail to probably clue you in on who is knocking. Take a few steps back or look directly into the camera and it’s no issue. A wider field of view and better handling of varying brightness levels would be welcomed, but the issues aren’t show stopping.

Doorbell Cam is also set to get a software upgrade later this fall with iOS 10 that will really make it stand out. The hardware that’s already on sale will receive a firmware update that enables HomeKit compatibility just like Smart Lock as iOS 10 adds doorbells and cameras to the list of supported HomeKit categories. This means you’ll be able to view the live video feed from your iPhone, iPad, or Apple Watch from a notification without ever opening the August app. Here’s what August has officially shared so far:

New HomeKit capabilities will be be added to the Doorbell Cam in late Fall after the new profile is finalized and the product is certified. These features will be delivered to existing Doorbell Cam customers through a free, automatic software update.

“We have been working closely with Apple on HomeKit from its early beginnings and we already have a very successful HomeKit product with our second generation August Smart Lock,” said Jason Johnson, CEO of August Home Inc. “Knowing that HomeKit would evolve, we developed our Doorbell Cam with the Apple HomeKit-compatible MFI chip in the device to be ready to support HomeKit capabilities as soon as Apple included support for video cameras in HomeKit.”

Overall, Doorbell Cam is a very modern and smart upgrade over existing basic doorbells. The hardware is noticeably bigger than my old doorbell and I do worry that it could attract unwanted attention, but it locks in place securely to prevent being removed without the proper tools. Motion detection alerts will be welcomed when they arrive, and HomeKit support this fall makes Doorbell Cam an easy recommendation if you’re shopping this category. 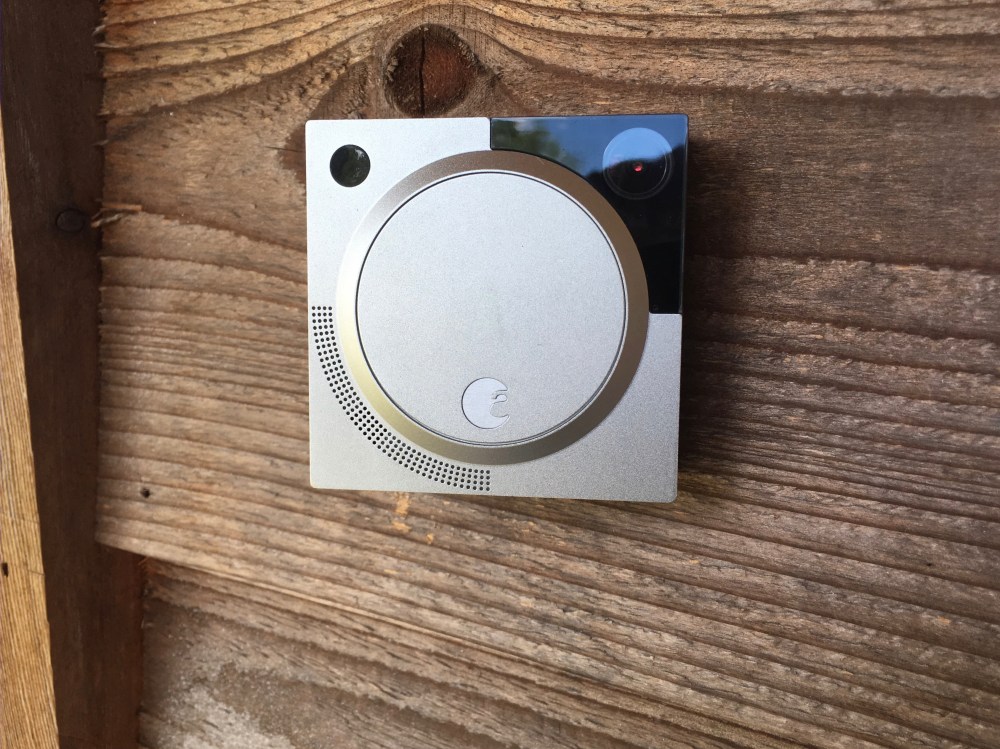 Doorbell Cam’s design is a bit too boxy for my taste too, but you can pick from four colors to suit your preference. The silver model is what’s tested in this review, but I’d probably opt for black (dark gray); red and copper versions are also made but stock is currently unavailable.