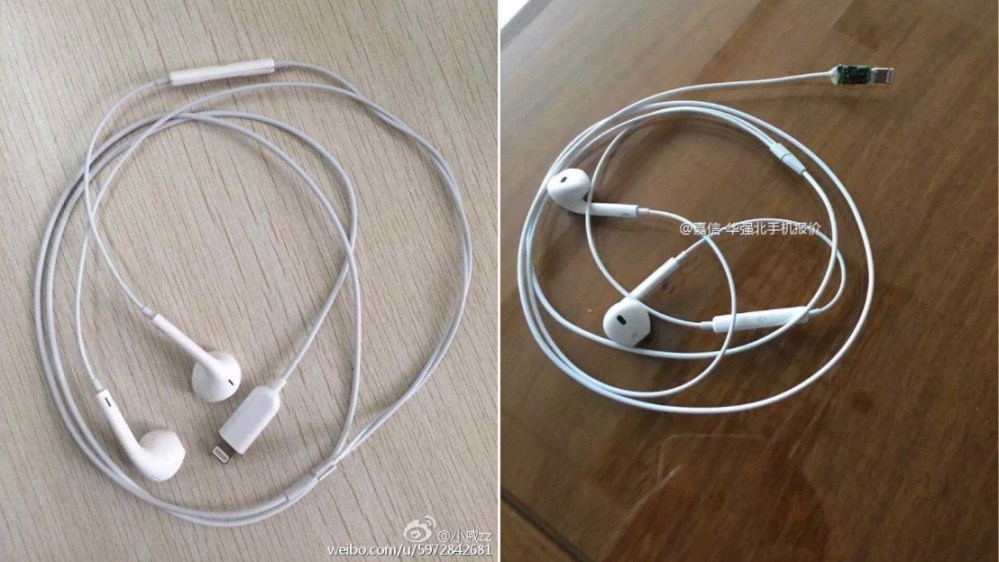 With the iPhone 7 widely expected to be the first model without a standard 3.5mm headphone jack, many have wondered what headphones if any Apple will bundle with the next-gen hardware. The latest guess once again comes from Weibo (via iPhone7.nl) as we see two different photos showing the same set of Apple EarPod headphones with a Lightning connector end in place of the standard headphone connector.

Take these images with a big grain of salt as we have in the past when similar images have surfaced, however, as such a product is easily Photoshopped. For example, this set of Lightning EarPods that later got debunked. Also notice the thickness of the Lightning connector on the latest set of purported Lightning EarPods. The end of a bit thicker than the Lightning connector on standard charging cables, and audio is already supported over Lightning, although the extra thickness could add durability which is a common issue.

The latest rumor a week ago actually suggested that Apple will bundle the standard EarPods we have today with the iPhone 7, but include a 3.5mm jack to Lightning adapter in the box to use with the new iPhone. While that sounds like a rather clunky solution, it would make the bundles earbuds compatible with Macs, iPads, and every other device without needing an adapter.

Aside from Lightning headphones or otherwise, Apple is expected to release totally wireless earbuds, possibly called AirPods, in time for the iPhone 7. These Bluetooth earbuds are expected to be cord-free and are currently being developed by the Beats team within Apple, although they could be marketed as Apple and not Beats.

At any rate, we should find out soon: if everything goes according to schedule, the new iPhone 7 or whatever Apple decides to call it should debut sometime in September. Other expected changes include a redesigned antenna layout on the back, bigger cameras including a dual lens setup on the Plus mode, new storage capacities including 256GB, and a new Space Black color option. Catch up on our iPhone 7 guide for all the latest.