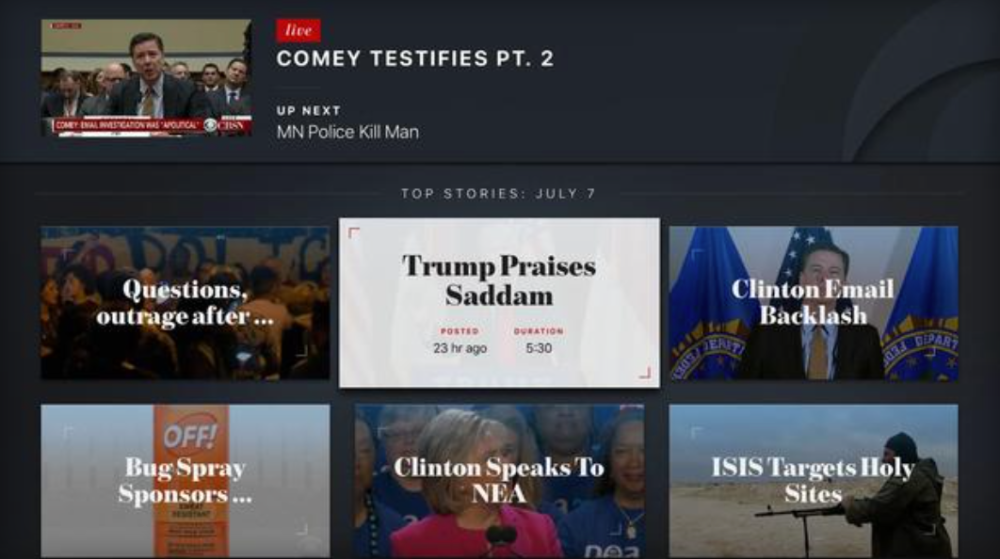 While Apple may not be planning to launch a bundle of TV channels any time soon, networks can still launch their own apps in the tvOS App Store. Today, CBS announced a new CBS News app for the fourth-gen device. The company has long offered a standard CBS app with its “All Access” subscription service, but the CBS News app focuses purely on live streaming content from the CBSN feed.

There’s no cable provider authentication or subscription necessary. Instead, the content is ad-supported. The app offers highlights of news stories, as well as live anchored coverage from 9AM to 12AM. This, of course, includes coverage of breaking news events.

CBS says that CBSN’s average viewing session is longest on Apple TV at 96 minutes and the company hopes that the new Apple TV will further help drive viewership.

“Our Apple TV app represents the future of how viewers will consume and interact with video,” Christy Tanner, senior vice president and general manager of CBS News Digital, said. “We are taking advantage of the platform’s cutting-edge, interactive technology to offer a customizable experience.”

The launch of the new CBS News app comes ahead of the upcoming conventions for the Republican and Democratic party conventions. Apple TV viewers will have access to the network’s “wall-to-wall” coverage, which CBS says will offer angles from inside and outside convention halls, as well as analysis.

ABC this week all rebranded its Watch ABC apps for iOS and tvOS with a new interface and a focus on “throwback shows.” Users are able to view the throwback shows, which have all since been cancelled, without having to sign  into a cable account. Viewers can also now stream live TV from within the app.

The overall functionality of the app is still the same for those with a cable login. Those users can still stream current episodes and season of popular TV shows, just with a new interface.

Both the ABC and CBS News apps are available on the tvOS App Store for free.