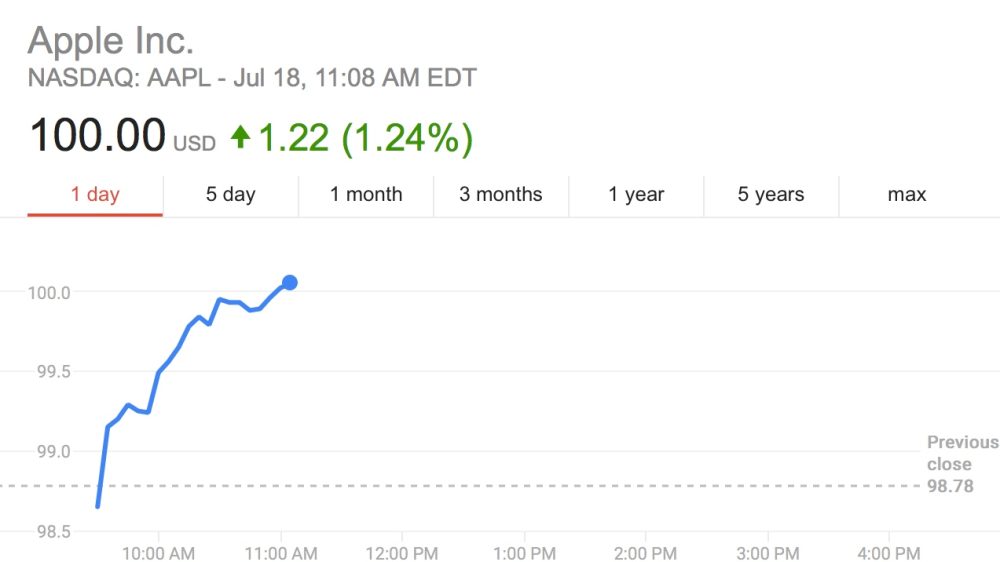 Apple’s stock price $AAPL is back into triple digits, breaking the $100 mark for the first time since June 6th. The rise doesn’t seem to be tied to any particular news event but AAPL stock has rallied through the second half of last week. The recorded high for today is $100.13 although naturally stock prices vary all the time.

Eyes are on Apple’s earning results, due July 26, to see if the company can meet expectations after ending its 13-year record revenue streak last quarter.

For fiscal Q3, iPhone sales will continue to be a strong focal point as many question the continued growth (or lack of) prospects of Apple’s smartphone range. Seemingly-strong iPhone SE sales may help uplift Apple’s figures.

That being said, many investors do not anticipate a return to unit growth until late in 2017 when Apple unveils its next major flagship phone. Expectations are low for the iPhone 7 to propel a strong sales upgrade cycle in 2016, due to its similarity to the existing iPhone 6s.

For the fiscal Q3 quarter, Apple has provided guidance estimates of revenue between $41 billion and $43 billion, gross margin around 37.5 percent and operating expenses of approximately $6 billion.