Review: Are the Bragi Dash truly wireless earphones the perfect companion for the iPhone 7? 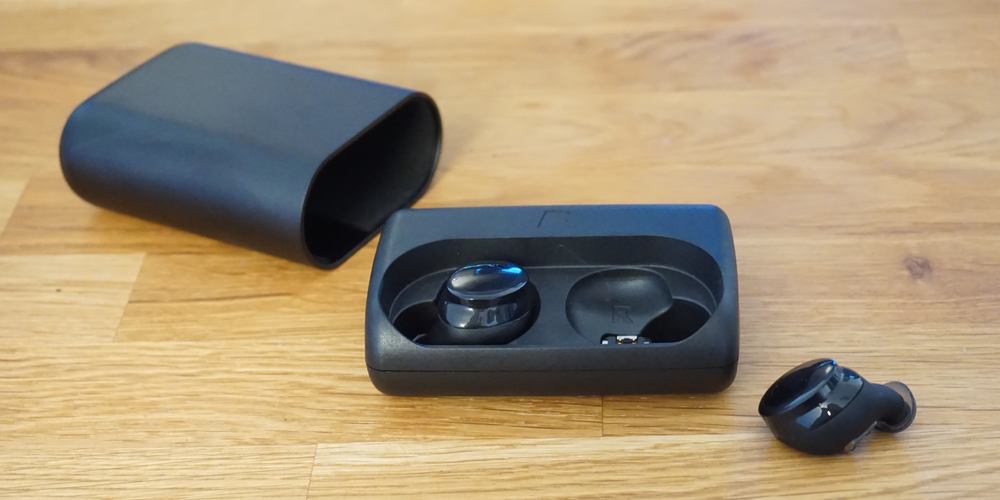 Update: With version 2 of the firmware, the previous maximum volume is now a recommended maximum. You now get a verbal message that you’re at the safe limit, but can then continue to increase the volume to the same level as typical earphones.

With it now looking all but certain that there will be no headphone socket in this year’s iPhone, demand for wireless headphones is likely to reach a new high. And when it comes to choosing a pair, Bragi’s Dash – marketed as ‘truly wireless smart earphones’ – seem on the face of it to be a very Apple-esque solution.

You can’t get much more minimalist than these. You have an earphone for each ear, and that’s it. No connecting cords, no neckband, nothing.

The earphones can also make a pretty good claim to living up to the ‘smart’ part of the branding, controlled by a mix of touch and gesture – such as nodding to accept an incoming call and shaking your head to reject it. For times when you don’t want to carry your phone, you can load music into the 4GB on-board memory. Which is handy when you’re swimming, as they claim to be 100% waterproof. And the carry-case has a built-in battery for on-the-go wireless charging.

The earphones arrive in beautiful packaging. It’s a kind of ‘book’ format, where you turn pages covering the real essentials of the product, then reach the gadgets themselves.

The earphones themselves sit in a charging case. This has an internal battery capable of recharging the earphones up to five times, and the case itself is charged by a supplied microUSB cable. There’s no plug adapter, but I guess most of us these days have plenty of those.

There’s a hi-tech look straight away, thanks to the subtly-pulsing blue LED strips as the earphones are charged by the case.

When you pull out the earphones, you find there’s a magnet that snaps them into place against the charging port – all very neat. There’s also a metal sleeve to the case, to keep the earphones safe when being transported in it.

Once removed, the earphones are very unassuming. A gloss black finish in the outside, and a matte silicone inner. 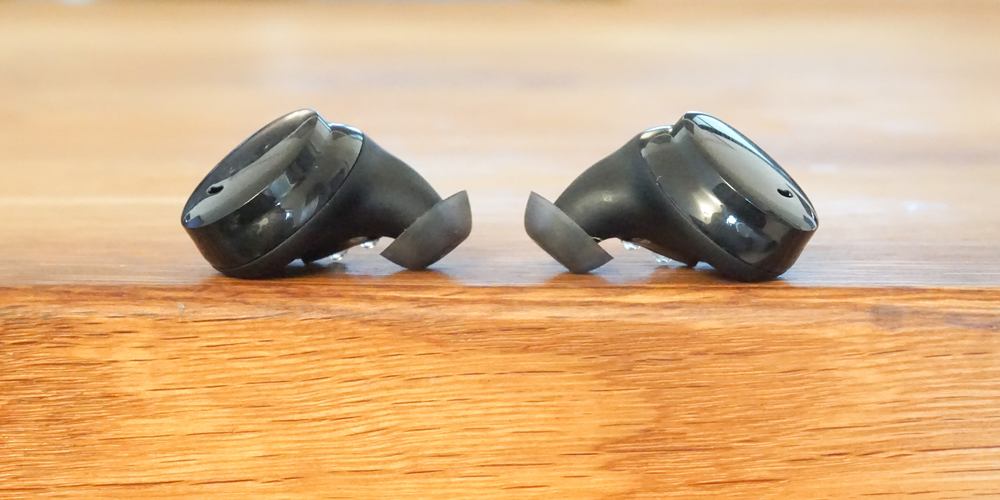 To suit different ear canal sizes, they come with three different silicone covers, marked small, medium and large. If small is too big, you can also use them without a sleeve – though Jordan, who also tried them, found that he got a rash from the bare earphones.

Bragi suggests trying out all the different sizes, which I have to say is easier said than done: the covers are very fiddly to fit. Fortunately, this is a ‘get it right once then forget it’ task.

It also has to be said that the silicon covers do spoil the aesthetics somewhat. Part of the glossy black is covered by the matte silicon, and they look especially untidy from behind.

Not that the rear view is anything anyone is going to see. And really, once you are wearing them, they just look like very anonymous black Bluetooth earpieces, much like the ones worn by cab drivers everywhere. Nobody is going to give them a second glance.

Once inserted with the appropriate size covers, they feel secure. I’d say they are neither comfortable nor uncomfortable – I was aware of them in my ears, but not to a level that bothered me.

Setup is a slightly fiddly process, as you need to pair the earphones twice – once as an audio device, and again to connect to the Bragi iPhone app. Both earphones then need to connect each time you use them, though that requires nothing more than a tap and long-hold to wake them.

The primary controls are taps on the surface of either the right or left earphone. These are:

You’ll notice, then, that once pairing is complete, the taps on the right earphone work exactly the same as button presses on wired headphones, so this immediately felt like second nature to me.

As mentioned in setup, you have to pair separately with audio and with the app, hence the need for the first of these steps. With audio transparency on, the microphone in the earphone relays sound through to you and mixes it with the music; off means they work like any other earphones.

To check the level of battery charge, you shake the earphones. They will then glow to indicate the battery level: blue (full), green (high), amber (medium) or red (low). This works well, though I did feel slightly silly doing it!

You also have the option of accepting or rejecting incoming phone calls via gesture. To accept a call, nod; to reject a call, shake your head.

The idea of this made me smile, though I couldn’t quite decide whether that was because it was cool or silly. In either event, I had to try it. The good news is that it works, the bad news is that it only works when you do it in a really exaggerated fashion.

I couldn’t ever see myself doing it in real-life, especially when I can accept the call just by tapping the right earpiece. It would have been great to be able to reject a call by tapping the left earpiece. Bragi does say that it can add functionality by updating the firmware, so perhaps this is something it could consider for the future.

I’m not an audiophile, and grateful for that fact. I have a couple of friends who are, and what they spend on their hifi kit is, frankly, terrifying. But by non-audiophile standards, I do have relatively expensive tastes in audio. Bang & Olufsen, Bowers & Wilkins and Naim’s entry-level kit is what I consider the sweet-spot.

I also think it’s very difficult for in-ear audio to get close to the quality of on-ear or over-ear kit, though Trinity’s Delta did surprise me.

Volume is also limited compared to most earphones. There were quite a few times I found myself swiping forward to turn up the volume, only to get the softly-spoken ‘maximum volume’ message in my right ear. Update: this no longer applies with version 2 of the firmware.

But they are, at the end of the day, in-ear phones – and a decent chunk of what you are paying for is the truly wireless form-factor. I don’t think anyone but an audiophile would find anything to complain about in terms of the sound; just don’t expect to be blown away by it.

One thing that may disappoint is the range. One of the things I sometimes use wireless headphones for is wandering around the house while listening to a podcast, but the range on these is very short. I found it started cutting out above 16-17 feet with direct line-of-sight, and immediately as soon as you have a wall between phone and earphones.

But that’s not a surprising limitation in a device that has to be powered by tiny batteries. Again, it’s a compromise for the fully-wireless format of the Dash.

The earphones have a bone-conduction microphone, and I’d say this is the biggest weakspot. If you intend to use them for anything other than occasional calls, you can rule them out right here. Callers reported that my voice cut in and out on most calls. These need to be viewed strictly as earphones.

Bragi claims the earphones have a three-hour life. I always expect manufacturer claims to be exaggerated, but not too much in this case: in continuous use, I saw 2h 46m before it started cutting out. As with most battery-powered gadgets, this number will likely diminish over time, but the ability to recharge from the case means this isn’t as much of an issue as it might be.

Bragi says the charged case can recharge the earphones up to five times. I didn’t get to test this, but certainly it comfortably kept them charged throughout a full day.

The Bragi Dash cost $299. That’s a lot of money for in-ear headphones – especially for ones that aren’t great for phone calls.

But they are probably the most hi-tech earphones on the market. As I mentioned earlier, a lot of what you’re paying for is the truly-wireless form-factor. Add in decent audio quality and the gadget-factor, and I don’t think the price is unreasonable.

Ultimately it will come down to how much the format is worth to you. Once the iPhone 7 comes out, the appeal of wireless earphones is going to increase, and if you want your wireless audio world to be as neat and hi-tech as possible, the Bragi Dash is likely to be on your short-list.

The Bragi Dash are available in black for $299 or white for $349 from the firm’s Amazon store.