AAPL breaks $100 in after-hours trading, as analysts rate the stock a Buy 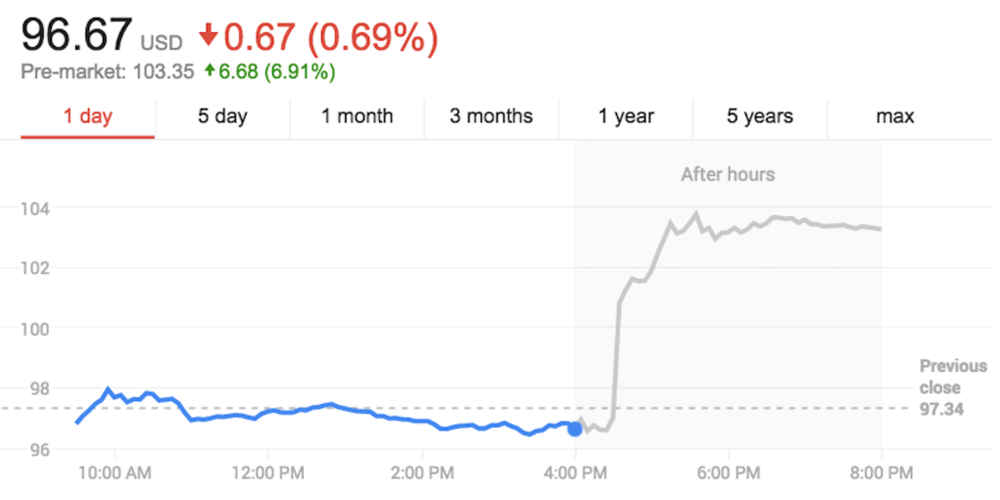 Update: That $103 price is holding steady in early trading this morning.

While Apple’s earnings weren’t fantastic, with particularly bad news in China, the market view appears to be that the numbers were better than feared. The stock price climbed sharply in the first hour of after-hours trading, jumping from $97.34 to more than $103, and has so far maintained this new level.

Business Insider did a roundup of analyst reactions, and found that with the single exception of Deutsche Bank, which rates the stock a Hold, all the others they surveyed rated it a Buy, with target prices ranging from $115 to $150 …

Deutsche Bank aside, the lowest rating was Barclays at $115, which said that while the company’s troubles were not yet over, the future trend was likely to be upwards.

We expect shares of Apple to be upward trending in the near term. iPhone unit trends and consolidated gross margin were better than feared. The model is not out of the woods with respect to structural questions related to global smartphone saturation and elongating replacement cycles, but overall results and outlook should be enough to get consensus estimates, and thereby, the stock moving higher. We had been preparing for one more downward reset. Our PT remains at $115.

Credit Suisse was most bullish, at $150, citing high loyalty and the strength of the ecosystem as key reasons for optimism.

Reiterate Outperform, underlying results on sell through better. Apple reported F3Q16 slightly better than expected results [which] included $3.6bn of channel inventory reduction (8.5% of revenue), suggesting an underlying EPS higher than reported. Given high retention rates, a superior ecosystem, and a multi-product compute advantage, we believe FCF of ~$67bn should be sustainable LT.

The full roundup can be read in the original piece, and we don’t have long to wait for the official opening price.