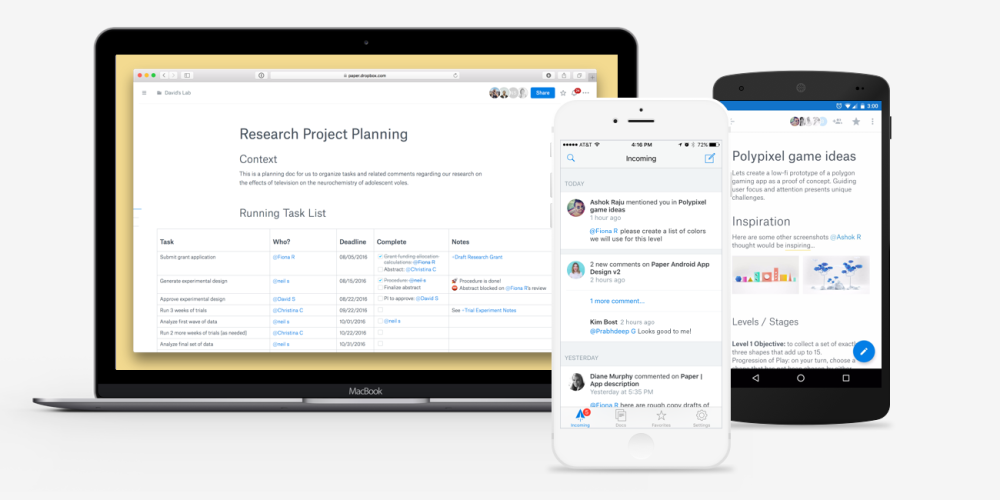 Dropbox Paper has been in private beta for about a year, and now the web service is gaining dedicated iPhone and iPad apps as it enters public beta for anyone to try. Paper is Dropbox’s take on a collaborative word processor — think Google Docs or Pages with iCloud — that’s built on a reliable cloud syncing service.

Before today, Dropbox users had to apply to test Paper and the service was only available on the web. I tried Paper a few months ago but found the lack of iPhone and iPad apps to be a non-starter. Starting today anyone can try Dropbox Paper without any sort of wait list or approval process, and the new iOS apps should make it worth another look.

This is how Dropbox describes the new Paper apps for iPhone and iPad:

Dropbox Paper helps fast-moving teams work together on docs, find important information, and stay in sync – even while on the go. Any updates, changes, or feedback you give will all be synced with your docs on paper.dropbox.com.

STAY UP-TO-DATE WITH YOUR TEAM
See all your notifications—comments, shares, and @mentions–in one organized list.

POST AND REPLY TO COMMENTS
Add, view, and reply to comments so you can have a conversation on the go.

EDIT AND CREATE DOCS
Making changes to existing docs or creating a brand new doc is as easy as texting.

NEVER MISS AN UPDATE
Favorite docs to pin them to the top of your doc lists— never miss an update on docs you’ve starred.

SHARE YOUR DOCS
Keep everyone on the same page by adding others from your team to your docs.

Dropbox Paper for iPhone and iPad requires iOS 8.1 or later. Dropbox Paper is also available in beta for Android starting today too. As for Dropbox’s history of sunsetting popular apps (think Mailbox and Carousel), Paper seems to be more where the company is focused with collaborate cloud activity around documents so we’ll see how it goes.