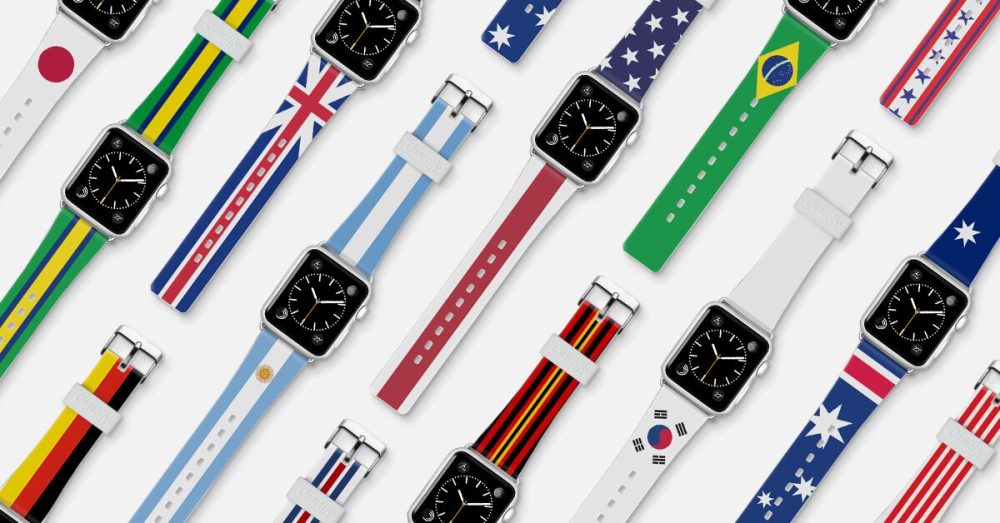 Last week we saw watch accessory maker Clockwork Synergy release a Pride version of its NATO Apple Watch band, inspired by the limited-edition band Apple gave to employees in the San Francisco Pride Parade. Now, accessory company Casetify has released a collection of Apple Watch bands that sport the respective flags of two countries competing in the Olympics. Casetify’s offering comes as Apple is selling national color-inspired bands itself, but only in Brazil.

Casetify’s offerings are available worldwide, though they are slightly different from Apple’s. In the case of Apple’s Olympic offering, they are woven nylon bands, like the ones originally introduced earlier this year. The third-party Caseifty bands, however, are made of a soft polycarbonate material.

As part of what Casetify is calling the “Olympics Capsule Collection, the company is also selling smartphone cases that sport the national flag colors.

While it would have certainly been nice for Apple to offer its own woven nylon Olympics-inspired bands worldwide, Casetify is catering to those of us who aren’t in Brazil for the Olympics. Currently, resellers are offering Apple’s official national color bands on eBay for an incredibly price premium and while I would definitely prefer woven nylon, it’s not something I’d spend hundreds or thousands of dollars on.

Casetify’s Olympic Capsule Collection is available on its website now. The Apple Watch bands are available in 38mm and 42mm sizes for $49, while the smartphone cases run $40. The full press release is below:

When it comes to watch bands, what Apple excludes, Casetify includes.

In a move that gives all Apple Watch users a chance to finally sport an Olympic watch band without making a trip down to Rio, Casetify bridges the gap by offering their very own Olympic-inspired watch bands worldwide.

“We wanted to create fashionable Olympic watch bands that everyone could get their hands on, not just in Rio.” said Wes Ng, CEO and Co-Founder of Casetify. “Our core value is about allowing people to express themselves and showcase what they’re proud of, and that’s precisely why we created this Olympics Apple Watch Band Capsule Collection.”

The Olympics Capsule Collection includes Apple Watch Band (38mm/42mm) and also caters to over 55 different smartphone devices, including the newest iPhone 6S/6S+ models. Priced at $49 USD and 40 USD respectively, both sold at www.casetify.com/collections/olympics-2016-capsule.

About Casetify
Casetify is a tech accessories brand that focuses on helping fashion aficionados refine their unique and personal style. Founded in 2011, Casetify (formerly Casetagram) is the first social design platform to make custom cases for phones, tablets and Apple Watch bands using social images. Today, it stands as one of the leading tech accessories companies in the world. Inspired by movements in fashion, Casetify draws iconic celebrities, multicultural millennials and authentic creators.

Casetify currently ships to 150+ countries and is loved by celebrities like Hilary Duff, Sam Smith, Lionel Messi and Snoop Dogg.