Apple details its ConnectED efforts, says it has provided over 32,000 devices to students

Apple has a storied history of being popular in classrooms around the world. The company today announced that its ConnectED efforts have helped the company reach more than 32,000 students throughout the United States. Most recently, Carver Elementary School in Indianola, Mississippi joined the ConnectED program, becoming the 66th school to which Apple has provided iPads.

For those unfamiliar, ConnectED is a program started by the Obama Administration to provide cutting-edge technology to teachers and students. In 2014, Apple pledged $100 million in iPads, computers, and other technology to the education program. Currently, Apple is providing some form of aid to 114 schools.

Apple today says that it has delivered iPads to 32,145 students as part of its ConnectED efforts, as well as to 9,042 teachers. Additionally, 4,434 hours of “Apple Professional Learning” have been taught by Apple representatives at the schools, while 189 miles of internet cable has been installed.

As the 2016-2017 school year kicks off, there are now 32,145 students at underserved public schools across the country who are learning, creating and exploring on iPad through Apple’s ConnectED commitment.

Today, 701 students in Indianola, Mississippi, were introduced to iPad as Carver Elementary School became the 66th ConnectED school — and the first of the school year — to transform its classrooms with Apple’s cutting edge teaching and learning technology solutions.

The ultimate goal of Obama’s ConnectED is to connect 99 percent of students in America to high-speed internet service within 5 years of 2014. In addition to Apple’s contributions, Verizon and Microsoft have also aided in the efforts, as has Sprint and a variety of other companies

Apple gave a brief update on its ConnectED efforts in late 2014, noting that it was working with Pearson, Scholastic, Houghton Mifflin Harcourt, Lexia, and other educational content partners to provide schools with up-to-date learning information. It’s important to note that Apple has efforts outside of ConnectED when it comes to education, selling Macs and iPads to a variety of schools around the world.

You can read more Apple’s ConnectED efforts on its website, while the White House website also provides details on the reach of the initiative. 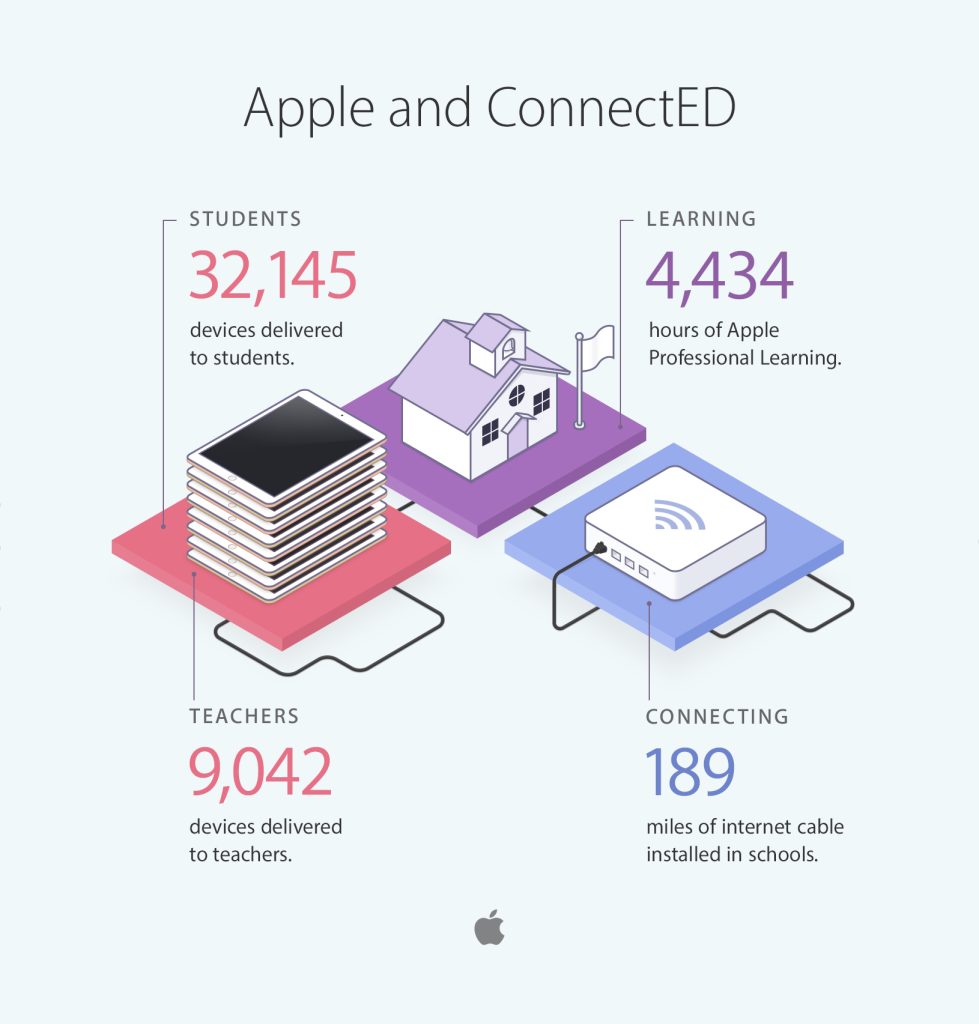