Could Amazon or Alphabet beat AAPL to be the first trillion-dollar company? [Poll] 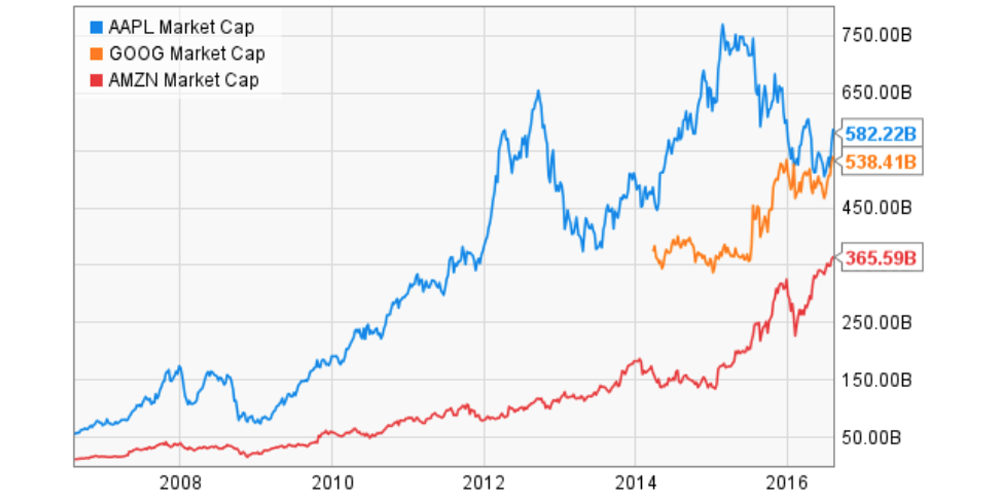 Back in 2014, some of the biggest investors in the U.S. suggested that Apple could be the first company to achieve a trillion dollar valuation by market cap, having gotten two-thirds of the way there that year before later slipping. Investment site Motley Fool yesterday acknowledged that the company could indeed be just ‘one home-run product’ away from this, but made the seemingly-unlikely argument that Amazon may get there first …

Apple’s rumored 10th anniversary overhaul of the iPhone could help spur the largest refresh cycle in smartphone history, though such rumors remain speculation more than one year away from its possible launch window. Further out, Apple’s rumored electric vehicle effort — Project Titan — could also trigger the kind of massive revenue windfall necessary to drive Apple’s valuation above $1 trillion. To be clear, Apple is certainly a plausible candidate here, but it needs at least one new home-run product to surpass this historic mark.

The difficulty, argued Motley Fool, is that it is operating in a sector currently seeing few prospects for the scale of growth needed to hit the magic $1T number. Amazon, in contrast, has already demonstrated the kind of growth trajectory required to get there, argues Andrew Tonner.

Researcher eMarketer estimates that by 2018, global retail sales will surpass $28 trillion dollars, but e-commerce will represent only 5.5% of those sales. Through programs like AWS or its rumored global logistics service, Amazon continually finds ways to lower its cost basis. This virtuous cycle – known as its Flywheel strategy – enables Amazon to compete for ever-greater pieces of e-commerce market share. This enduring trait should help allow Amazon to continue to consolidate e-commerce market share for the better part of the next generation. I see few reasons Amazon cannot or will not become the online Wal-Mart to the world, even as Wal-Mart itself finally gets its act together to challenge Amazon.

Amazon has historically chased market growth at all costs, sacrificing profit to do so, so I can see the argument here – and that trend-line is somewhat persuasive. But with Amazon having a current market cap of $362B against Apple’s $588B, and the huge potential revenues that could be accrued from a future car project, I’m skeptical. Alphabet – parent company of Google – is also pitched as a third candidate, with a current valuation of $536B.

What’s your view? Which of the three companies do you see as most likely to win the race to a $1T market cap? Take our poll, and let us know your reasons in the comments.