Review: Siri-controlled August Smart Lock is a key upgrade to a HomeKit house 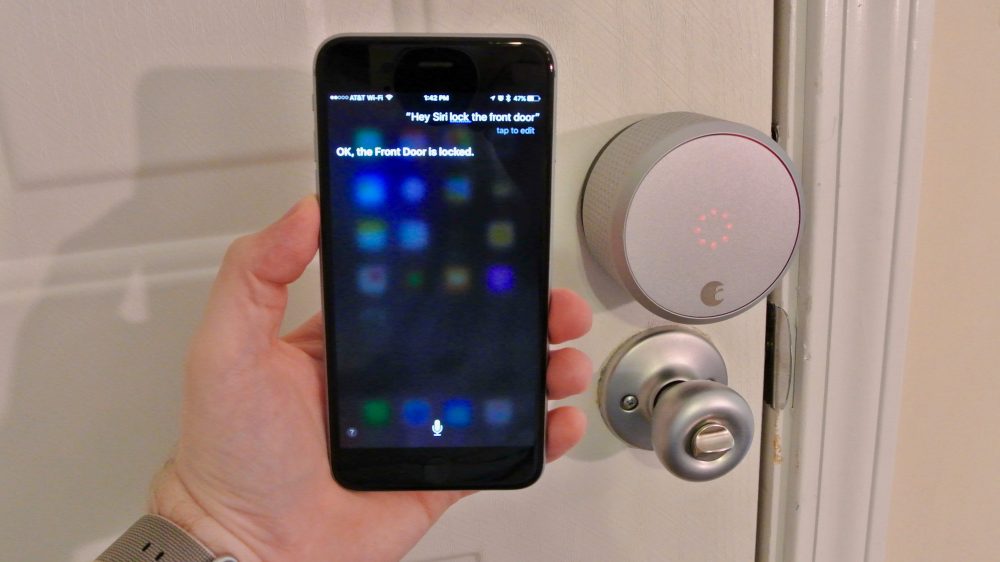 Being able to automate locking and unlocking your front door is one of the easiest ways to transform your house into a smart home and enter the age of the Jetsons. Dom reviewed the first August Smart Lock (reg. $199) last year, and August has released updated hardware with a feature Apple fans will want. The updated August Smart Lock (reg. $229) features HomeKit support and a slightly tweaked design (magnetic battery cover, lock orientation notch, grooved edges). I’ll go hands on with the new capabilities and share my take on the newest August Smart Lock below.

HomeKit support in the second generation August Smart Lock lets you control it with your voice using Siri on your iPhone, iPad, or Apple Watch (Siri on Apple TV can’t control locks and Mac Siri can’t control HomeKit yet). You can tell Siri things like “Lock the front door” or ask “Is the front door secured?” and Siri will respond appropriately. This is really fun if you’re used to using the ‘Hey Siri’ voice command on the Apple Watch as long as you don’t mind your neighbors seeing you talk to yourself instead of fumbling for your keys.

You can also use HomeKit to create a scene with connected accessories. Scenes let you group different actions together and activate them with their name. For example, you can say “Good night” to Siri and have HomeKit lock your front door, set the living room lamps to 10% brightness, lower the temperature, and turn off your other lights. If you maintain a regular schedule, you can even use automation to activate this scene at a certain time of day or night.

I’m definitely no Jeff Benjamin, but here’s a demonstration of Siri control through HomeKit in action so you can see for yourself:

“I’m home” is the other HomeKit scene that I’ve been using with the August Smart Lock. Using that command with Siri unlocks the front door, sets the temperature to the right target, and turns on the lights inside. Super useful.

The companion August app includes ways to automate the Smart Lock without using HomeKit too. For instance, you can optionally unlock August Smart Lock automatically when you arrive based on your location. I’ve left the house with just my iPhone and Apple Watch, locked the front door with Siri, and arrived back home with the door unlocked as expected.

You can always check the August app to see if the front door is locked, but for initial testing I enabled alerts for all lock and unlock activity to be sure when the automation activity was happening. Manual lock activity is off by default, but you can enable this to be notified of all activity too.

There’s also an option to automatically lock August Smart Lock shortly after it unlocks. The benefit here is that you can unlock August when you need to open the door, then trust that it locks behind you without having to use your key or Siri. If you always go outside with your iPhone or Apple Watch (or use the August Keypad), you shouldn’t worry about accidentally locking yourself out.

The tricky part is deciding how long to wait until August auto-locks. One minute was apparently too quick for me to bring my bike inside as August locked the dead bolt while the door was still open. The two minute option was too soon from auto-unlocking based on location to getting out of the car and coming inside. Three minutes might be the sweet spot for me (30 seconds is the shortest option, 5 minutes is the longest but may leave an opportunity for unwanted visitors).

Ultimately, I may leave this feature off and decide not to fully step into the future. The benefit is only noticed when leaving, not entering, as it’s easy to lock the door behind you without keys or Siri.

Overall the August app is fairly easy to use and well-developed. You can check the lock status of August Smart Lock and control it from the front page (remotely with August Connect or August Smart Doorbell), view lock activity or change settings, and access quick actions from the widget or 3D Touch shortcuts menu. There’s also a useful Apple Watch app for checking lock status, locking and unlocking, and viewing lock activity.

There’s no iPad app though (just the blown up iPhone app) which makes the HomeKit version all the more important; the third-party Home app and Hesperus are solid HomeKit iPad apps (and Apple’s when it certifies August’s chip for iOS 10).

There’s also guest access. I set up August on my iPhone, and it was easy to share the app with my wife and share the same access that I have (or she can use the old-fashioned lock and key method). You can temporarily invite guests through the app or create a temporary pass code with the August Keypad.

Installing August Smart Lock is surprisingly easy if you can handle a screwdriver. Before reviewing August my house actually didn’t have dead bolt locks installed, but my landlord installed standard dead bolt locks on all my doors at my request. If you rent, upgrading your house or apartment to a smart home can be tricky but August is a non-destructive installation.

The setup guide is fine, but I like YouTube tutorials for visual reassurance. This guide attempted to get the job done in under 10 minutes (August’s pitch) which I found to be mostly true. I was confused about the orientation of the lock when I first set it up, but I thought it through and figured it out pretty quickly. 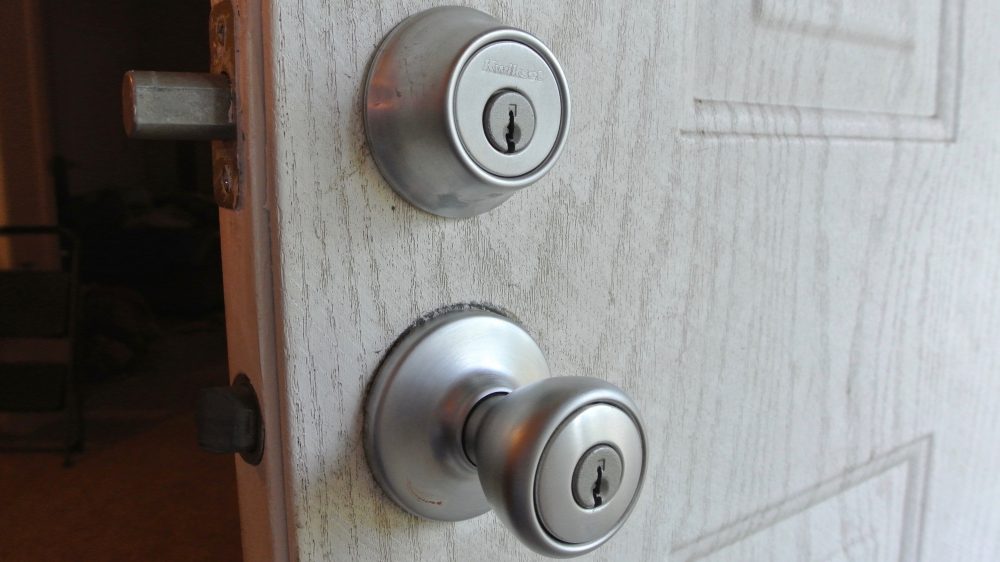 I did have an issue with August Smart Lock getting jammed initially and the app’s easy-to-follow calibration tool didn’t seem to fix it. It was late on a Sunday night so I decided to sleep on it and troubleshoot in the morning, and the issue mysteriously fixed itself after that. Zero issues since the first night (and physical control wasn’t affected, just software control).

I was delighted that August Smart Lock works with your existing outside lock hardware. This means my outside lock doesn’t look fancy or attract attention, and my landlord doesn’t need a special key for the front door. It also means that my dead bolt and bottom lock use the same key, although I wish August had a solution for making the bottom lock smart too.

Because August Smart Lock installs in place of your existing dead bolt hardware, it will be easy to remove and replace with the old hardware when I move. 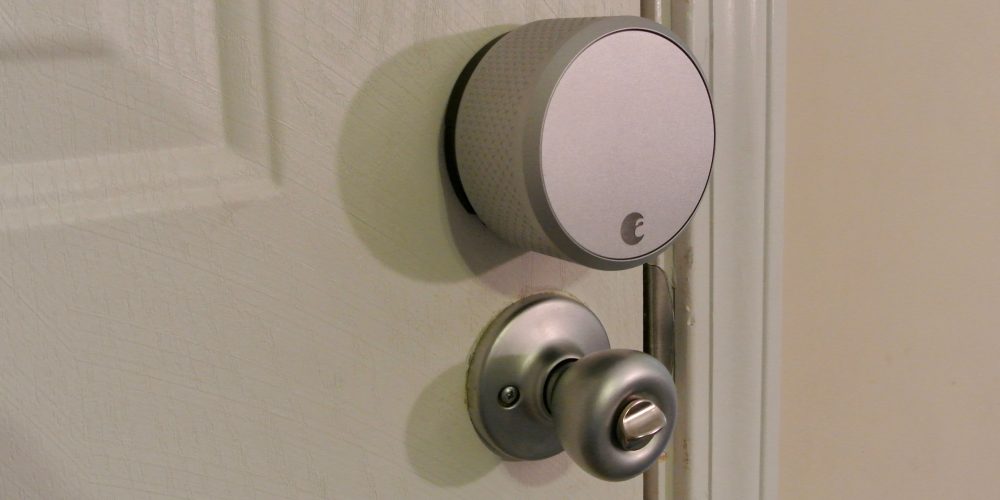 My one complaint with the August Smart Lock comes down to its design. If it weren’t quite so big, the circular design when fit right in with the door knob, but August Smart Lock has a big brain and it’s about twice as wide as my door knob below it. It might blend in with some environments but not mine unfortunately. I think August gets the core functionally down properly, but miniaturization can be a priority in future versions.

There’s also the awkwardness of having a smart dead bolt but a dumb door knob below it. Ideally these both would be connected as I mentioned before. To get the full convenience like leaving home to bike without a key and still securing the door, I leave the bottom lock unlocked. I don’t discount the security of the normal dead bolt lock that I use with August, but it does feel odd leaving the door knob lock unlocked (I keep both locked when I’m inside). 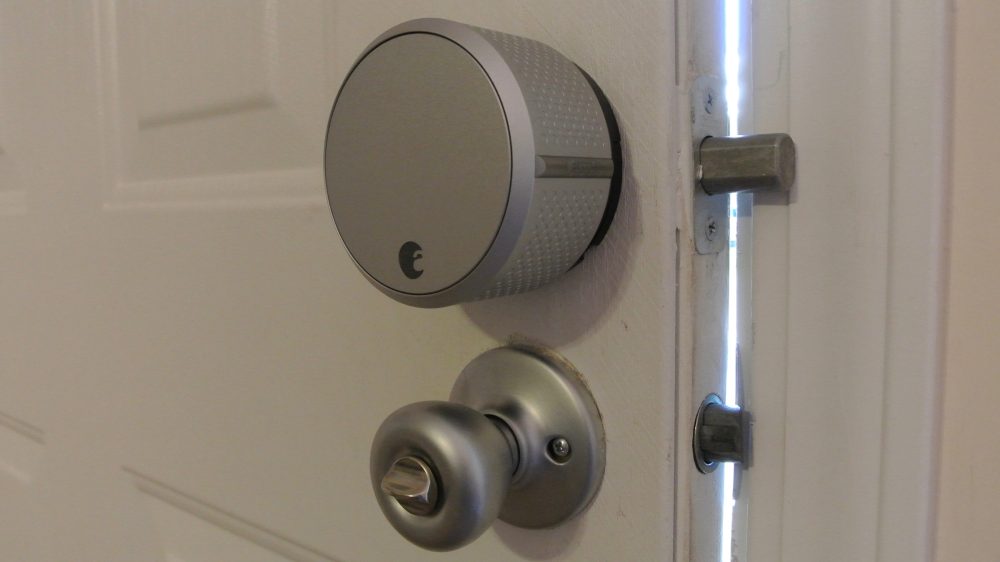 It’s early days for smart home accessories and that seems to be the nature of retrofitting traditional hardware with connected devices.

With that being said, August Smart Lock is a really cool gadget. Moments like saying “Good night” to Siri to lock up before bed or saying “I’m home” to your Apple Watch to open the door without juggling your keys and grocery bags make it clear August solves everyday problems. Even without using HomeKit, August Smart Lock has some impressive intelligence inside the August app which works with other services like IFTTT and Amazon Echo as well.

If you use the iPhone, Apple Watch, or iPad, I recommend the $229 HomeKit model to unlock August Smart Lock’s full potential. I also recommend August Doorbell Cam (reviewed) over August Connect for adding remote access which makes the experience better than relying on being nearby. 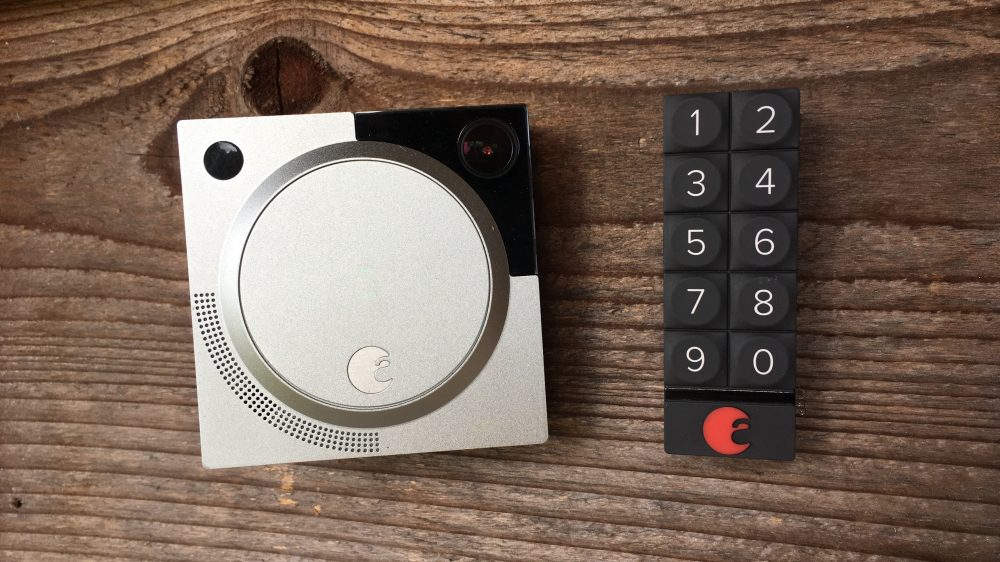 Doorbell Cam is $120 more than Connect but you get a lot more bang for your buck while adding remote access and the door bell camera and smart lock work great together in one app. Upcoming HomeKit support for Doorbell Cam will make it an even more compelling system.

August Smart Keypad at $79 might be a pricey add-on for a $230 smart lock, but if you spring for it you likely won’t regret it. You can lock August Smart Lock with the press of a button (which I like more than auto-lock), unlock it with your personal passcode, or create temporary codes for guests which is especially nice for visitors without smartphones. 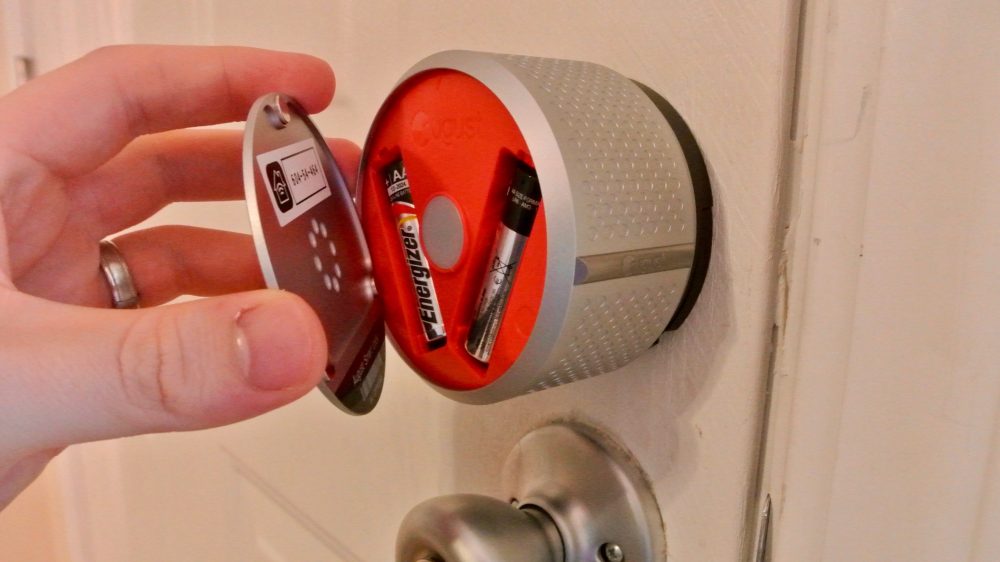 The HomeKit-enabled August Smart Lock is available in silver or dark gray for $229. The previous model is still available without HomeKit support for $199 in silver, dark gray, and August Red.