Review: Jackery Jewel is a life-saving Apple-certified Lightning cable that has a built in battery: $16AC (Giveaway) 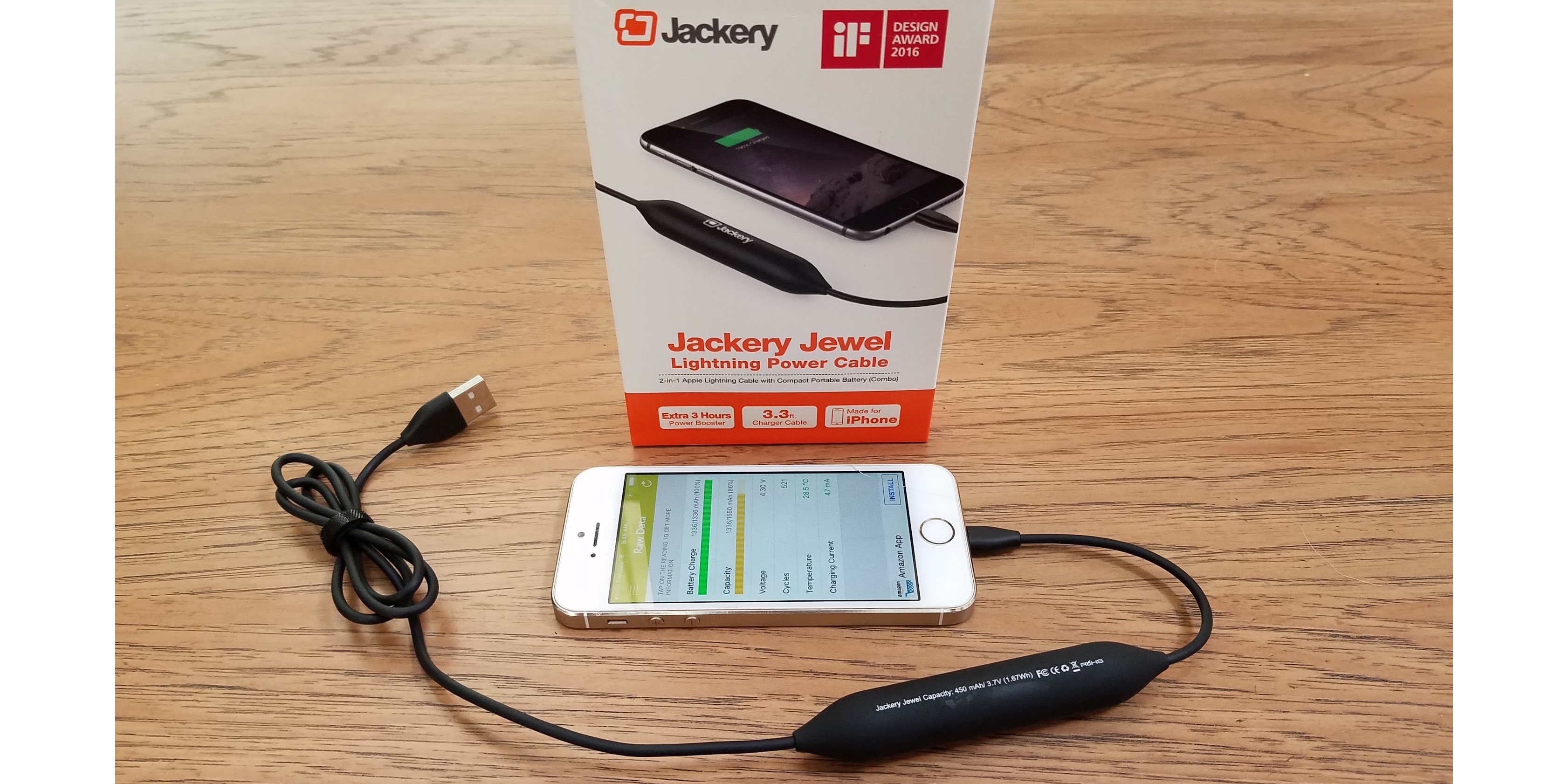 Two weeks ago, 9to5Toys introduced you to a unique Apple accessory that will likely help a ton of you with one of the biggest issues we iPhone users experience: the dead battery. We’ve seen tons of small MFi keychain chargers and tiny USB battery packs but this is the first time, to my knowledge, that a battery is actually included into a Apple Certified MFi cable.

This week, I took the $16 (after code JCRJEWEL) Jackery Jewel for a spin.

The idea is pretty simple: Jackery put a 450mAh battery right in the cable.  Now the 450mAh isn’t going to give you a full charge even on an iPhone SE. In fact, in my usage, 25% was a stretch. That’s because the battery, roughly the size and Watt-hour capacity of a AA battery, has about a third the of the iPhone SE and 1/5th the capacity of an iPhone 6S plus. There’s also some inefficiencies of transferring the power.

The Jewel isn’t meant to be a full battery replacement however. This is meant to give you an emergency few hour boost when you are away from a plug. We’re talking emergencies here.

In real world usage this worked pretty much as expected. It functions as a normal Lightning cable when plugged into a Mac or PC. Data transfer happens like you’d expect and I didn’t notice any lag. If you use your iPhone while plugged in, the battery dangling is a slight inconvenience – I would have probably located the battery closer to the USB A side if I was designing this – but a minor gripe overall.

The cable is strong and the joints are at least as strong as Apple’s cables – yes I know Apple has a reputation for fraying cables but if you use them as a baseline, these are certainly stronger. They come with an 18 month warranty which is longer than Apple’s default year warranty.

If the Jewel is unplugged and being powered from the battery, it only draws 1A of power and that takes about 25 minutes to drain into the iPhone. However if plugged into a 2.4A USB port it will take the full power and fast charge. IT obviously also charges iPod Touch, iPad and anything else that uses lightning – like Beats speakers and headphones or an Apple TV remote.

Also I noted that once plugged back in after running to dead, it took a few seconds for the cable to start charging again. There are definitely some electronic things happening in there.

There really isn’t much of a status indicator on the Jewel:  Blue for charged and a blinking red LED for “you are in trouble or almost dead”- if the red light is flashing, the power draw starts dropping to 0 amps.

Initially, I thought that the button that you must push to charge using the battery was superfluous but you really want to save that extra battery power for emergencies not just use it right after unplugging the cable.

Also, because it is a cable, it is always being charged and ready for that emergancy. I have about 10 USB batteries but I almost always forget to charge them up for emergencies.

I wouldn’t recommend something this mAh size for iPads. It will only give you an extra few minutes of usage.

However, for $3 less than Apple charges for a Lightning cable, Jackery is selling an Apple certified MFi replacement that includes a working 450mAh battery? Seems like a no brainer.

We’ll also be giving one of these away as part of our upcoming 9to5Rewards program for someone who retweets or likes the post on Facebook. Thanks for sharing! :D.