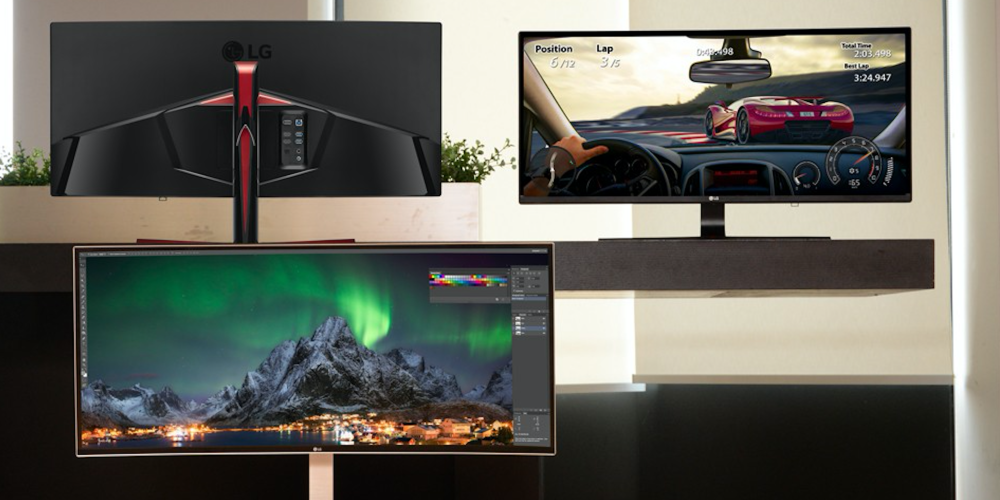 LG today has taken the wraps off of a pair of new 21:9 monitors that it will show off at the IFA conference in Berlin this week. Both of the displays offer the UltraWide technology that LG has become known for over the years, while one also features USB-C support. The first comes in at 38-inches with the model number 38UC99, while the second comes in at 34-inches and carries the 34UC79G identifier.

The 38-inch beast features a 21:9 aspect ratio and a QHD+ resolution of 3840×1600 paired with a color gamut that LG says covers 99 percent of the sRBG color space. Additionally, and notable for MacBook users, LG’s new 38-inch offering features a USB-C port for easy multi-port connection. LG says that this is the first UltraWide monitor to feature USB-C support, touts that it offers a “peek at the future of connectivity.” The USB-C port will be cable of transmitting data, as well as charging another device like a smartphone or laptop.

Next up is the 34-inch 34UC79G that LG is says is the world’s first 144Hz IPS gaming monitor. Touting it as a gaming monitor, LG says a variety of enhancements have been made to ensure that gamers have the best experience possible. In addition to the 144Hz refresh rate, LG has implemented things like Black Stabilizer and Dynamic Action Sync to “meet the needs of today’s gamers.”

The full press release for the new LG displays can be seen below, while the displays themselves will be on display at LG’s IFA booth this week.

As the first UltraWide™ monitor to feature a USB Type-CTM port, the 38UC99 offers a peek at the future of connectivity. The advanced port allows users to transmit content and data as well as charge another device such as a smartphone or laptop at the same time, all with single code helping eliminate clutter. The monitor also includes capabilities to customize display options with just a few clicks of the mouse and store customized color settings with the easy-to-use Onscreen Control software and My Display Preset.

And the 38UC99 is just as suitable for entertainment as it is for workplace efficiency. With two 10W built-in Bluetooth compatible speakers, the 38UC99 offers Rich Bass audio output in the 85Hz bass range. This impressive audio system improves the entire user experience with its deep, rich sound. The one millisecond Motion Blur Reduction feature streamlines gameplay by minimizing afterimages that often occur in fast-paced games.

The monitor also offers a crosshair option which adds a fixed target to the center of the screen to increase accuracy during FPS games and a mouse line hook to prevent drag resistance caused by the mouse’s cable. With the monitor’s curved shape and immersive 21:9 aspect ratio, the 34UC79G presents a world-class gaming experience for fans of FPS, RTS or MMORPG.

34UC79G also includes a number of practical design features fit well into gaming station setup without hindering gaming such as tilting, adjusting the height and the mouse line hook which minimizes tangled cords.

“With tablets and smartphones at their disposal, consumers today don’t feel shackled to their desks anymore so it’s more important than ever that their monitors offer additional user benefits and conveniences,” said Brian Kwon, president of LG Home Entertainment Company. “LG is the number one brand in the 21:9 monitor space because we were first to recognize that consumers are adopting a new way of working and playing that put them ahead of the competition whether that’s working or playing.”

Visitors to the LG booth (Hall 18) at IFA 2016 will be able to experience LG’s new 21:9 UltraWideTM monitors for themselves from September 2-7.