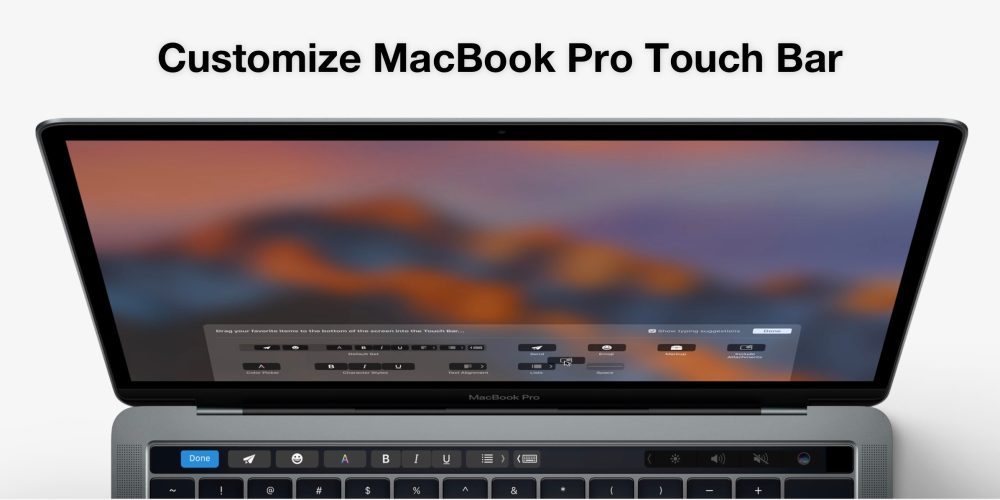 How to customize the Touch Bar on these Mac laptops:

The 2016 MacBook Pro adds a new way of using macOS with the addition of the Touch Bar, featuring dynamic touch controls, sliders and buttons, close to your fingers next to the row of static keys. Depending on the app, the Touch Bar changes context and shows relevant buttons for what you are doing.

You can also take this one step further and change what the Touch Bar offers yourself: Apple has made it pretty customizable. You can add new buttons for a particular app, take others away, as well as adjust the persistent Control Strip items on the right side of the Touch Bar. For example, you can remove the Siri button from the Touch Bar. Here’s how to do that and a lot more …

By default, macOS sets up the Touch Bar with a three section layout. There is a persistent virtual esc key on the left, a Control Strip region on the right containing system controls and a middle section dedicated to the app that is frontmost. The escape key can’t be changed but you can customize both the center app region and the Control Strip …

Add buttons to the Touch Bar within apps

Not all apps support the Touch Bar (although more are adding integration all the time) but those that do can allow users to customize the visible controls. This means that in addition to the default set of buttons, sliders and interface widgets, you can tweak the Touch Bar to suit your workflow. Unfortunately, not all Touch Bar apps support Touch Bar customization.

You can find out if the app supports customization by launching an app that works with the Touch Bar, opening the View menu in the menu bar and looking for the ‘Customize Touch Bar…’ option. If present, click it to open the editing view. This reveals a drawer of options for the current context — in this example, I’m using Safari Touch Bar customization.

Choose an item to add to the Touch Bar by clicking on it with the mouse and dragging it down. Drag it down past the bottom of the screen into the Touch Bar. Use the trackpad to position the item and release to place.

Remove buttons from the Touch Bar within apps

Enter the customize view again by going to the View menu in a compatible app, and select ‘Customize Touch Bar…’. If you look closely, the buttons in the Touch Bar shake slightly to indicate they can be edited (just like jiggle mode on the iPhone home screen). To remove an item, you can move your cursor down the screen and into the bar, hold down and pull it upwards to delete it.

You can also use the touch input directly — just drag an item on the Touch Bar screen to the trash icon on the left side of the screen. If you customize an app’s Touch Bar setup and later regret it, you can always return to the default configuration. Enter the Customize Touch Bar mode and find the ‘Default Set’ item in the tray. Drag this into the Touch Bar to replace everything with the default options for that app.

To add a new item to the Control Strip, open the editing mode like so: Launch System Preferences. Navigate to Keyboard and press the ‘Customize Control Strip…’ button. You can add buttons for brightness, Spotlight, Mission Control, Play/Pause, Screenshot, Do Not Disturb, Dictation and much more.

Remove Siri and other buttons from the Touch Bar Control Strip 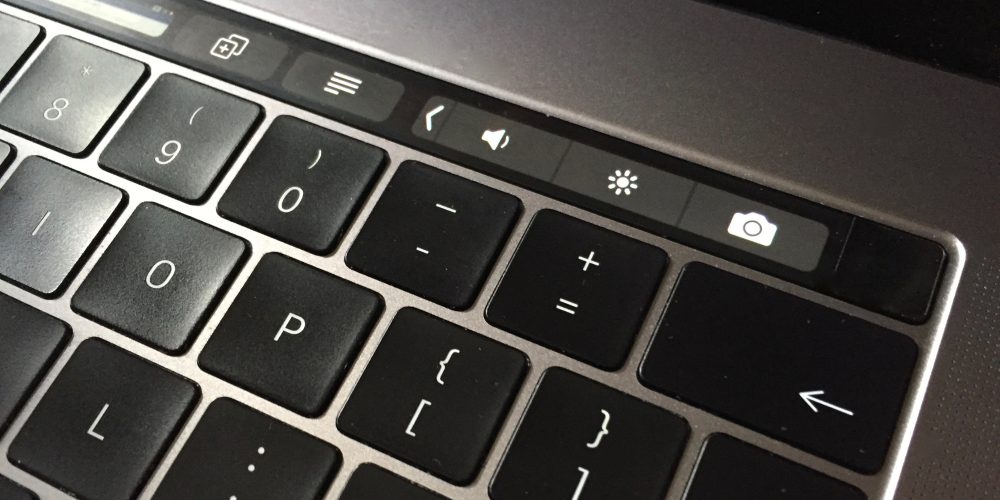 By default, the Touch Bar compact Control Strip includes four buttons: a volume slider, mute, a brightness slider, and Siri. Personally, I find the multicolored Siri icon very distracting on the Touch Bar as every other system icon is rendered in monochrome. I also don’t use Siri on Mac that often so it feels unnecessary to have it take up valuable Touch Bar real estate.

You can remove items in the expanded view too — just press the expand arrow whilst in editing mode to change context. If you want to, you can remove the colorful Siri icon from both parts of the Control Strip. 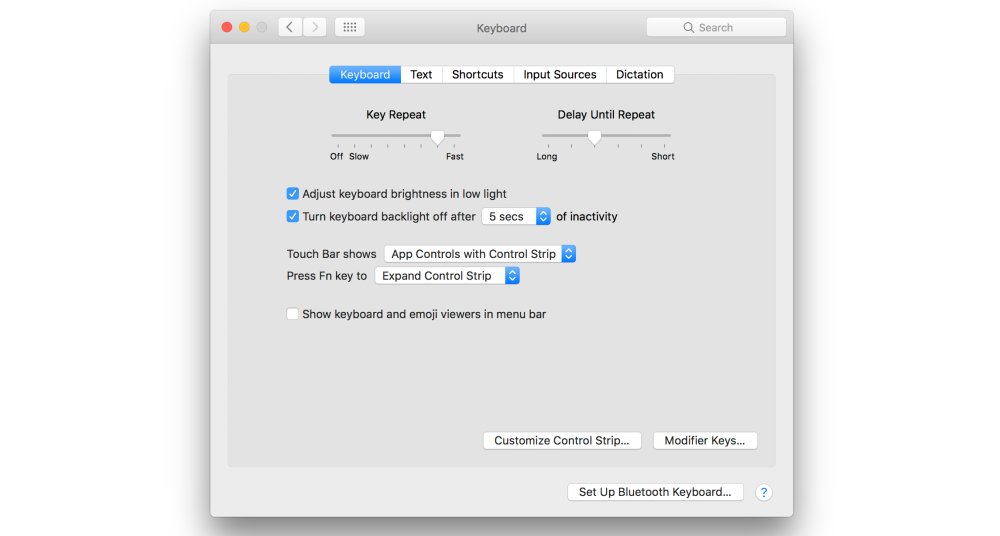 If you don’t like the persistent Control Strip, you can actually turn it off completely to dedicate the entire Touch Bar to controls for the frontmost application. This reclaims about a fifth of the display’s real estate, although not all Touch Bar apps take advantage of the additional canvas area.

Hold down the FN key to show Expanded Control Strip, not function keys 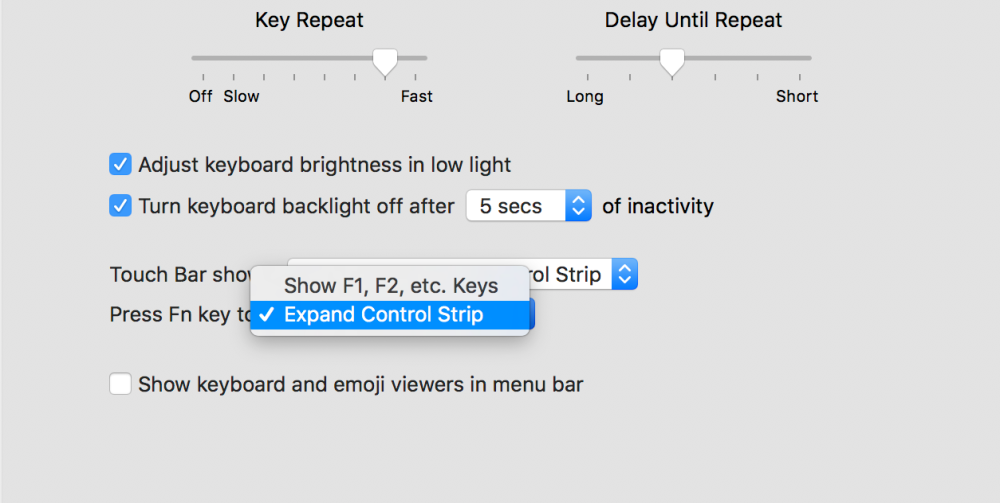 Apple knew that removing the traditional physical row of keys with the dynamic Touch Bar was going to be controversial, so they added a fallback to the old behavior. Simply press the ‘fn’ key in the bottom-left corner to instantly show a row of F-keys on the Touch Bar.

This is fine but a little too dull. To embrace the rich world of the Touch Bar, you can change this behavior to instead show something more dynamic. In System Preferences, you can change what happens when you hold down the ‘fn’ key. You can make it instantly show the Expanded Control Strip, which you customized above, instead.

In the Keyboard preference pane, select ‘Expand Control Strip’ from the drop down as shown above. It’s a lot nicer than fiddling with the disclosure arrow on the mini Control Strip, just hit the fn key with your left hand and simultaneously tap a button with your right hand. Boom. It’s a lot more useful than static function keys for most people and I found it made me use the Expanded Control Strip more frequently.

As well as changing the arrangement of buttons, there are some on-the-fly customizations you can do with the Touch Bar. Typing suggestions are a common feature for the center segment when the cursor is focused in a text field, but they may not be desired all the time. I find the animated motion distracting. To hide word and emoji suggestions, tap the little arrow next to the three-pane-bar and QuickType shrinks down for that session. In some apps, this will make space for alternative buttons and controls.

When playing music in the background, a new ‘Now Playing’ Control Strip item will appear for compatible apps; the icon looks like a mini volume EQ. For example. start playing a song in iTunes and then tab away to another app. Tap on this to see a scrubber for the currently playing track, play/pause and back/forward transport buttons to control the active playlist. What’s special about the Now Playing screen is that it is persistent; if you change apps, the music controls will continue to be presented on Touch Bar for as long as the app is playing audio. Press the close button (hit the ‘x’ on the left) at any time to return to the usual contextual controls.

FaceTime also supports this kind of persistent bar. Whilst on a call, a green ‘call’ button will appear on the Control Strip. When pressed, it shows the FaceTime call status and quick actions to end the call or mute. Whilst expanded, this view continues to display regardless of what app you are in. Tap the ‘x’ to return to normal Touch Bar functionality.

What is your experience with the Touch Bar?

The Touch Bar is very customizable with a lot of flexibility, albeit a little hidden. The Touch Bar is all about adding convenience and the ability to mix and match exactly what controls you use certainly helps to push that further. Do you use the Touch Bar on your new MacBook Pro? Let us know your thoughts in the comments.