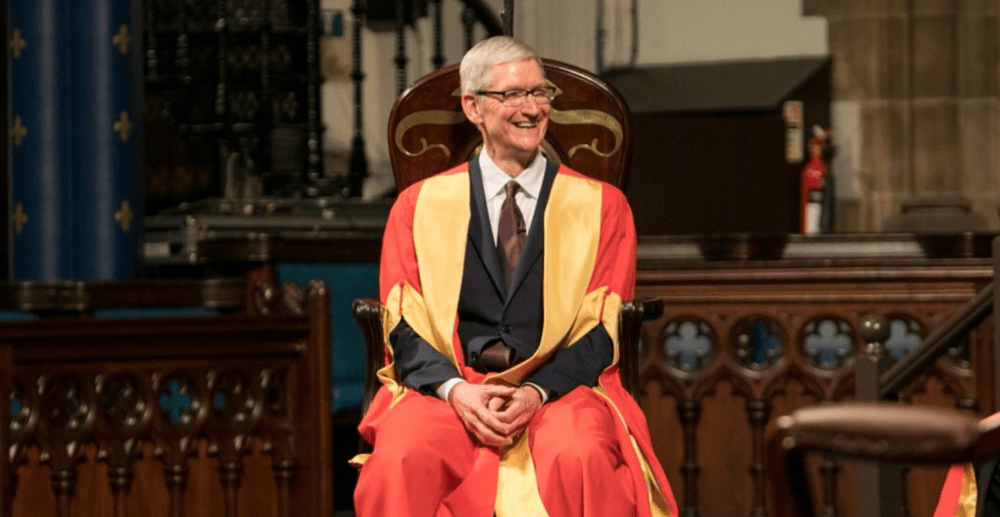 Earlier today, we covered a few of Tim Cook’s comments from his fireside chat at the University of Glasgow, but now that a full video has emerged, there are a few other quotes worth noting. During the full chat, Cook discussed topics such as the Apple Pencil, immigration, and more.

One viewer asked if Cook felt that Apple had gone against Steve Jobs by releasing the Apple Pencil and questioned if Steve’s DNA was still a part of the company. Cook explained, however, that the Apple Pencil is the furthest thing from a stylus:

The truth is, Steve did hate styluses but if you’ve ever used Apple Pencil, it’s the furthest thing from a stylus that’s ever existed. I met a designer on Monday in Paris, a designer of very high-end dresses for particular customers. He designs totally on iPad Pro with Apple Pencil.

Designers historically, and many still do, carry sketchbooks. because they don’t know when they’re going to have inspiration. And when they have it, they want to have their tool there. With Apple Pencil, you have the best of all worlds. Unlike a sketch that you have to do many times to try out many different looks – like color, specific lines, etc. With the Apple Pencil, you can quickly try out any number of designs.

The designer had a box full of crayons markers pencils that he used to use and now he uses one. So, the Apple Pencil is a creative tool. That’s what it’s about. It’s not about stylus.

Cook then went on to talk more about Jobs and his legacy and how Jobs’ philosophy is very much still embedded in Apple and will be for years to come.

Steve’s DNA will always be the core of Apple. Steve is deeply embedded in the company. We celebrate him and we celebrate his philosophy. His philosophy will be at Apple 100 years from now. The philosophy is sort of passed down with every generation. Yes, he’s very much at Apple.

The Apple CEO also touched more on Apple’s opposition to Trump’s immigration order. As we noted earlier today, Cook said flat-out that he does not support the immigration ban. The full video offers a bit more color, with Cook stating that “Apple would not exist without diversity.” This is likely a reference to both the current level of diversity at Apple, as well as to the fact that the father of Steve Jobs was a Syrian immigrant.

I personally believe that the wealthier countries have the responsibility to accept people that are fleeing civil war. It’s a reasonable argument for people to have about to what degree. It’s also very reasonable for people to say that we’re not doing enough for people in our country today. And I think that’s also true. I just don’t think that it’s a trade, one for the other. I think the U.S. can do both.

The full video, including the university presenting Cook with his honorary degree, can be seen below: