Touch Bar integration coming soon to Word, PowerPoint and Excel for Mac — try it out today with the Office Insider beta program 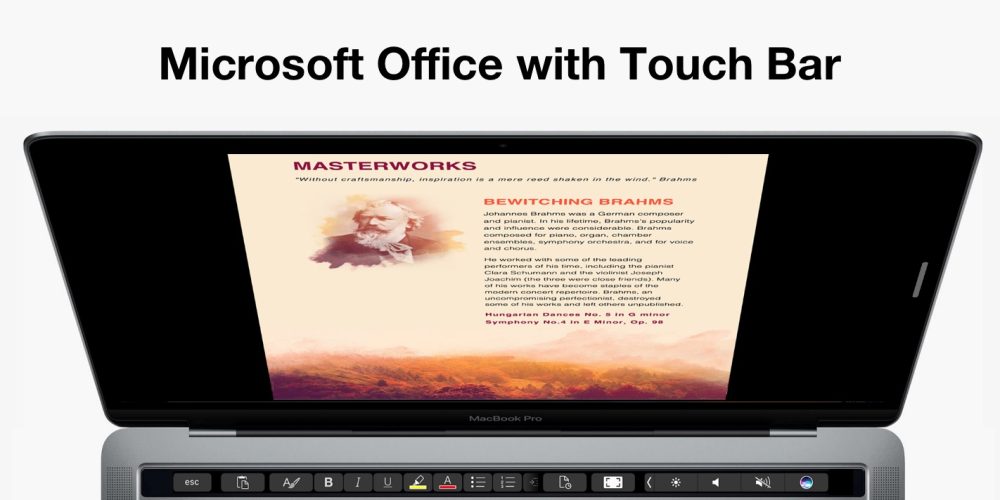 At the original October event for the new MacBook Pro, Apple announced that Microsoft Office would offer Touch Bar integration in the coming months. Although the support is not yet ready for the general public, the Office Insider beta program has now released an update including Touch Bar features (via The Verge).

Word, PowerPoint, Excel and Outlook include Touch Bar features enabling quick access to text formatting, object ordering and other tools. We’ve got an overview of what’s included after the jump, or you can join the Mac Office Insider program here and test out the new versions today for yourself …

Microsoft is adding Touch Bar integration to Word, PowerPoint, Excel and Outlook in Microsoft Office for Mac. For Word, users can enter Focus Mode to hide all distractions on their primary display with the most-commonly used formatting options visible, instead, on the Touch Bar.

Heading and paragraph styles appear pre-rendered as Touch Bar buttons so you can preview what the text will look like at a glance.

In PowerPoint, the Touch Bar shows a miniature slide deck allowing users to navigate and re-order their presentations in a couple of taps. You can also tap a Reorder Objects button to bring up a graphical map of all the slide’s elements.

The public Microsoft Office update including Touch Bar integration will be available soon. For now, it’s only available to members of the Office Insider beta program although it’s generally straightforward to join the pre-release pool. Naturally, you’ll need a 2016 MacBook Pro to take advantage of the Touch Bar features.

Apple’s competing iWork suite (Pages, Keynote and Numbers) have included Touch Bar support from day one and are available as free downloads in the App Store.