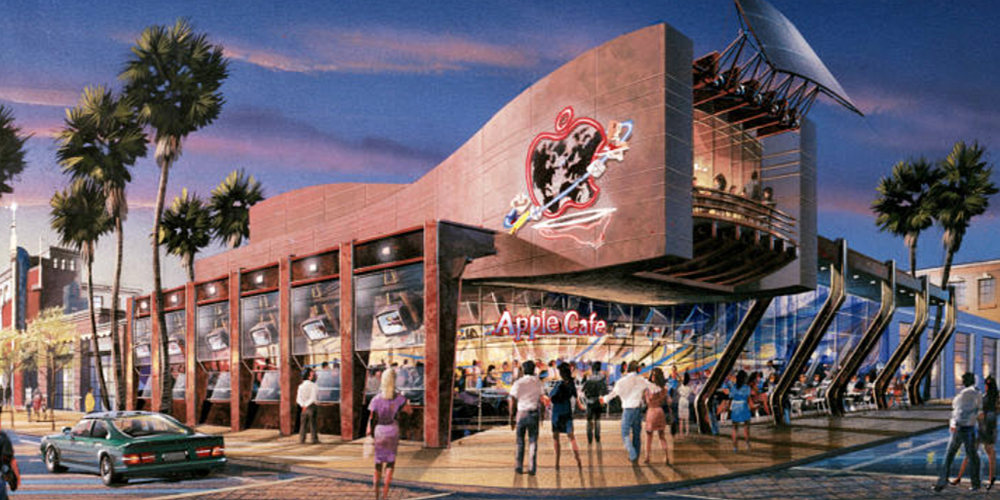 When Steve Jobs returned to Apple in 1997, it wasn’t long before he decided that transforming the retail experience was key to the company’s future growth. He almost immediately started cutting the Mac authorized retailer network, eliminating those stores he felt weren’t delivering the right kind of purchasing experience, and in 1999 began work on the Apple Store project. The first store opened two years later in 2001.

But Apple came very close to launching a different kind of store back in 1997: Apple Cafes. These would not have been owned by Apple, but rather used the name and Apple computers under license.

512pixels ran a piece on them a couple of weeks ago, and that seemingly inspired Fast Company to interview the man behind the concept, ex-Disney Imagineer Tony Christopher.

We were contacted by Apple because of all of our experience to that point. We were the go-to guys with creating something unique in the retail space. Steve Jobs—who we never met by the way—selected the team we were working with, because he was looking for a way to connect Apple to its customers . . . a way to have the customers sort of touch Apple.

Quaint as it may seem now, the concept was the world’s first cybercafe. Apple computers would provide Internet access, but also be used to order food & drinks.

It was a super secret project, because you know, at the time, the Apple Store hadn’t arrived yet. So buying a computer was done online or through computer stores. At the cafe, when you sat down at your booth, there was an Apple computer at the table. There were several programs you could call up. One was you could order your food. (There were food service people, but we wanted to make the order first.) You could play fundamental video games.

Christopher says you’d also have been able to buy Apple computers there, so it would have been the forerunner to the Apple Store.

There are a couple of different theories as to what killed the project. Christopher says that Steve was already working on the concept of retail stores, and wanted to do those instead. The book The Apple Revolution says that, actually, Apple wanted to go ahead but the third-party company which would have funded them pulled out.

Whatever the truth, it’s certainly fun to think about how differently Apple Stores (or Cafes) might have evolved had the project gone ahead. Perhaps that moveable window on the balcony was the inspiration behind the sliding windows in San Francisco’s Union Square store?