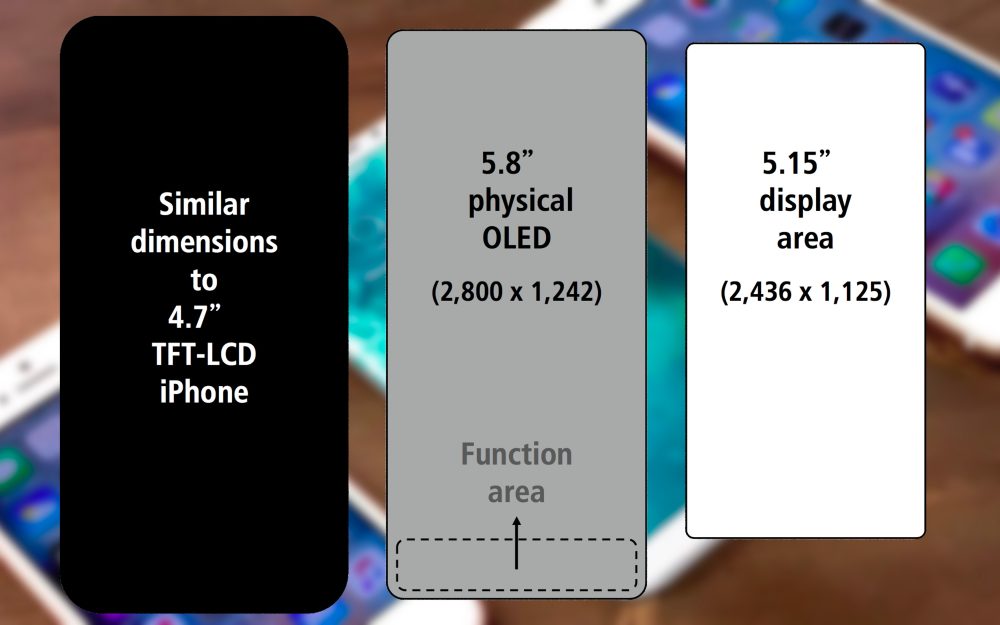 KGI’s numbers imply that the iPhone 8 will have a pixel density around 521 PPI, far higher than the existing iPhone lineup (iPhone 7 PPI is ~320). It also seems likely that Apple will use Retina assets at 3x scale, packing Plus features into a body the same size as the 4.7 inch phones …

The report says that the area of the screen dedicated to the app content and home screen has a resolution of 2436×1125. The current iPhone 7 has a screen resolution of 1334×750.

On a raw pixel count basis, this means the iPhone 8 main screen resolution is almost twice that of the iPhone 6, iPhone 6s and iPhone 7. Taking KGI’s metrics that this screen region will measure at 5.15 inches, this works out to a pixels-per-inch measurement of 512.

If the numbers turn out to be accurate, the iPhone 8 would tout a pixel density greater than both the 4.7-inch and 5.5-inch iPhones, which have 325 PPI and 401 PPI, respectively. This will be welcome news for Android users looking to switch to iPhone, who have complained at the 4.7-inch iPhone’s low-resolution display relative to other smartphones on the market.

Going further, we can estimate that Apple will utilize this high-density screen at 3x Retina scaling. Why? The current non-Plus iPhone uses 2x scaling which means app render at 667x375 points.

For the rumored iPhone 8 specs, a 2x scaling would be nonsensical (a 1218×562 res would likely mean UI elements are far too small for comfortable interaction). At 3x, the numbers fit a lot better.

At 3x, the iPhone 8 main screen canvas would be equal to 812x375 points. Coincidentally (or more likely planned to be this way), the 375 point vertical resolution is identical to the current iPhone 7. This means application design on iPhone 8 will be roughly similar to that of the current 4.7-inch iPhone series, except with an additional 145 points worth of height to play with.

The physical size of the UI would be a tad larger (the screen is bigger after all) but a single line of text will take up the same amount of horizontal space. Vertically scrolling content would be able to show more rows at a time, however. Unfortunately, these dimensions mean that the next iPhone would no longer have a 16:9 aspect ratio screen. Instead, the ratio would be closer to 21:9 which could be a drawback of the new design when watching video content like YouTube or downloaded TV shows without letterboxing. You can get a sense of how narrow/tall this is by looking at the diagram, left.

For the function area, the report’s metrics suggest that region will be about 290 pixels tall. To help visualize it, that’s approximately equal to the 4.7-inch static icon dock on the Home Screen. The report does not elaborate on how Apple plans to utilize that space, although we can assume some form of virtual Home button icon will be shown in the middle.

All of these claims are not certainties; KGI’s numbers could be incorrect for a start although the analyst does have a pretty good track record. It is also possible that Apple may offer multiple Display Zoom modes which switch between 2x and 3x rendered canvases.

KGI’s predictions are also not fully explained; he says that the 5.8-inch display has a native resolution of 2800×1242 but the display area for content is 2436×1125. The 117px difference in the horizontal dimension is not accounted for which leaves some hanging question marks.

That being said, the iPhone 8 is looking to be a massive upgrade. As well as the radical new design with an almost bezel-less front, the PPI is looking to be a significant upgrade over what Apple offers in the lineup today. Other iPhone 8 rumors include the addition of wireless charging, better water resistance, and some form of face recognition biometrics. Apple is expected to officially unveil the new phone at a media event in the fall.