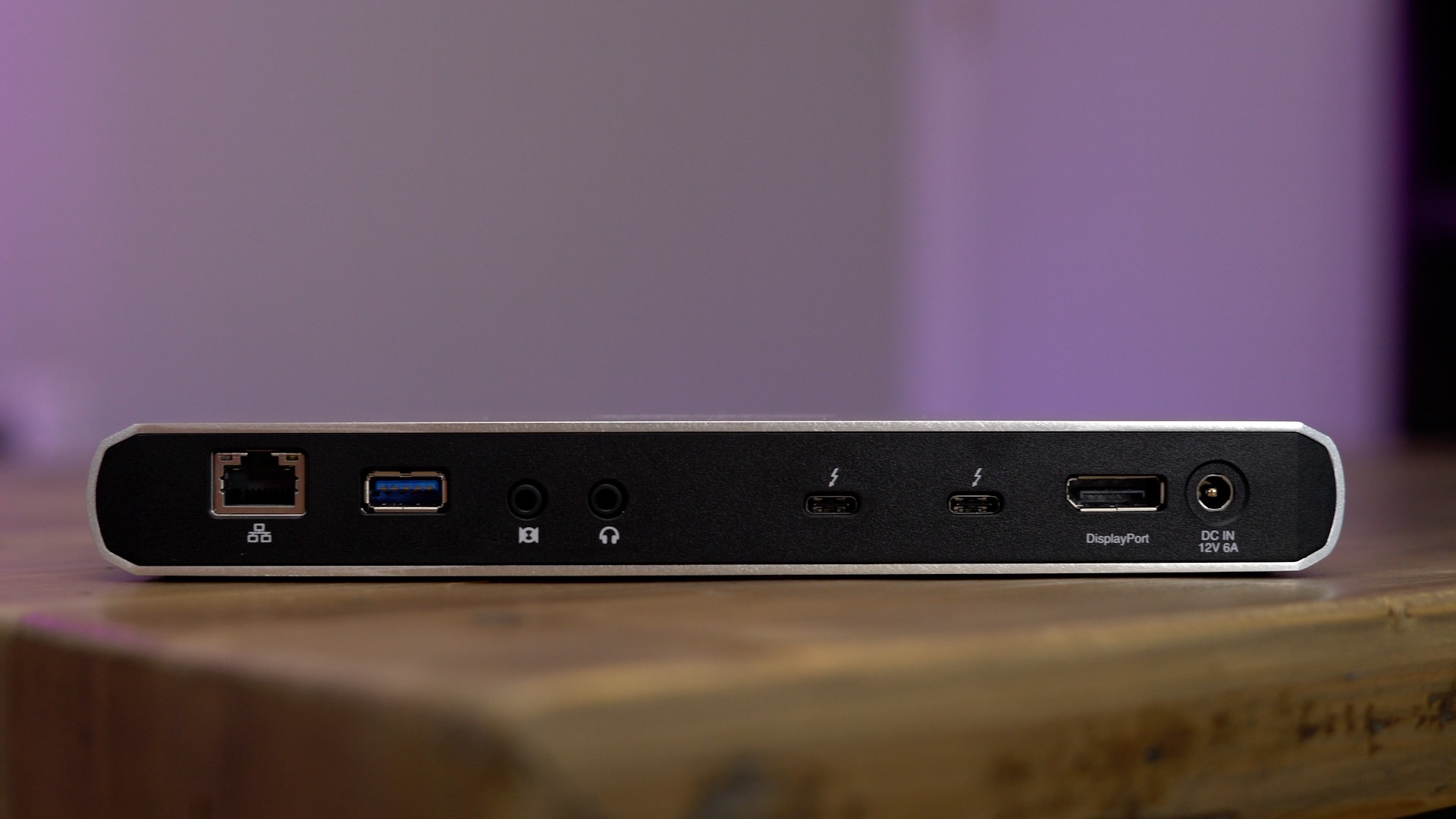 The $199 CalDigit Thunderbolt Station 3 Lite (TS3 Lite) is a Thunderbolt 3 dock geared towards 2016 MacBook Pro users. Unlike some of the docks released prior to the most recent MacBook Pro refresh, the TS3 Lite works out of the box without needing to employ any hacks or workarounds.

The aluminum-wrapped unit comes with dual Thunderbolt 3 ports and is capable of being daisy-chained. It also comes with two USB-A ports, Gigabit Ethernet, DisplayPort, and audio in/out connections.

Perhaps most-notably, the TS3 Lite works with the LG UltraFine 5K Display, which makes it an option that may warrant the consideration of those with such a setup. But as you’ll see from our hands-on video walkthrough, the TS3 Lite isn’t for everyone; it’s primarily aimed at customers who don’t require full power delivery from the dock.

The TS3 Lite is just over an inch tall, and slightly under a pound in weight. At roughly 9-inches by 3-inches, the dock is a fairly compact piece of hardware that won’t occupy too much room on your desk.

Featuring an aluminum wrapped outer layer, the TS3 Lite’s mid section is made up of dark plastic. It’s a good-looking design, and a big improvement over CalDigit’s previous USB-C dock, but it doesn’t try to push the envelope too much as far as design is concerned.

The TS3 Lite features an LED status indicator embedded in its front panel, and I appreciate that the dark blue light isn’t so large or so bright that it becomes a needless distraction. More hardware manufacturers should take note of this.

On the bottom of the dock you’ll find four rubber feet in each corner to assist with keeping the unit firmly planted on your desk. The top of the dock is emblazoned in the middle with a modest CalDigit logo and not much else. 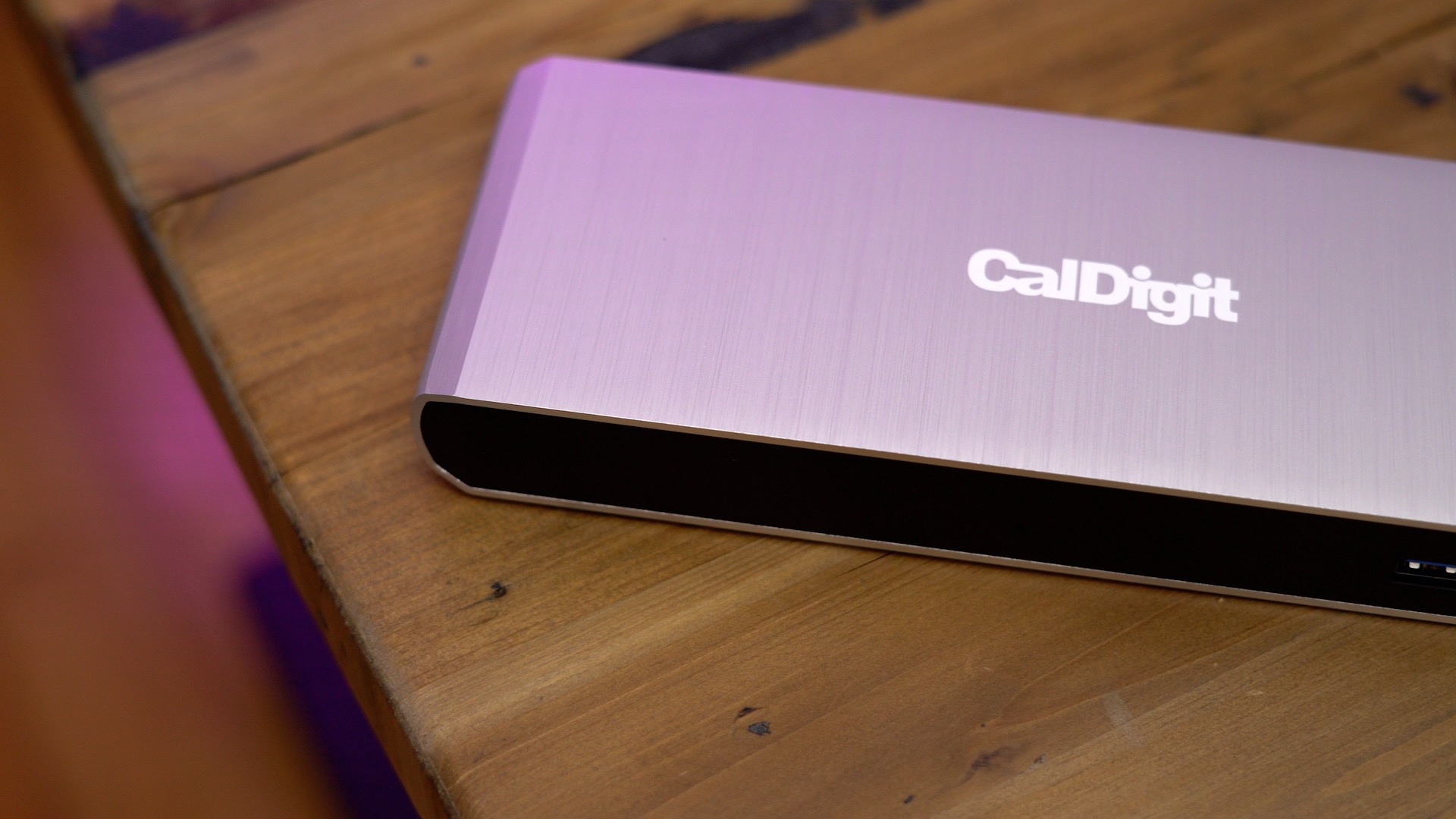 The TS3 Lite includes the following ports on the rear of the unit: 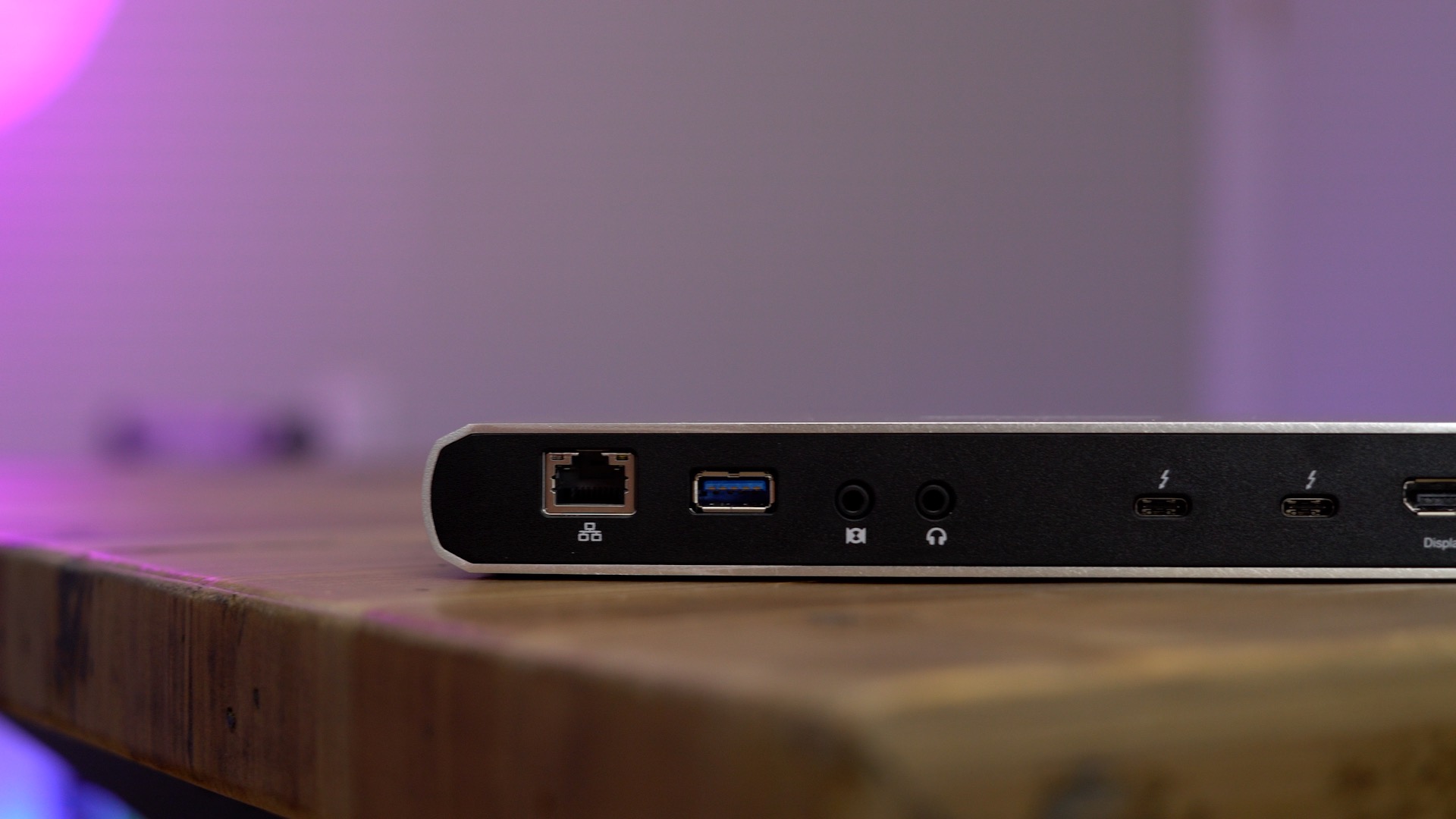 The front of the unit features two additional ports for added convenience:

For a so-called ‘lite’ dock, that’s a good helping of ports, but there are some noticeable absences that might be missed depending on your needs. Conspicuously missing is an SD Card slot, something that would have been particularly helpful given the 2016 MacBook Pro’s anemic port situation. Because the dock lacks HDMI output, you’ll also need to rely on an inexpensive DisplayPort to HDMI adapter if you wish to connect to HDMI display devices.

Another thing to note is that the USB ports on the TS3 Lite are all USB 3.1 gen 1, which maxes out at 5 Gbps. That means that fast USB devices like the Glyph Atom RAID SSD will fall back to slower 5 Gbps instead of 10 Gbps.

Perhaps the biggest feather in the TS3 Lite’s cap is its ability to work with the LG UltraFine 5K Display. By taking advantage of the dock’s dual Thunderbolt 3 ports, users can connect one Thunderbolt 3 port to the LG UltraFine 5K Display, and the other port to the 2016 MacBook Pro. This allows full 5K resolution, while adding the benefit of the additional ports offered by the dock.

The TS3 Lite is also capable of connecting to dual 4K displays by taking advantage of the DisplayPort connection along with an additional Type-C adapter cable. 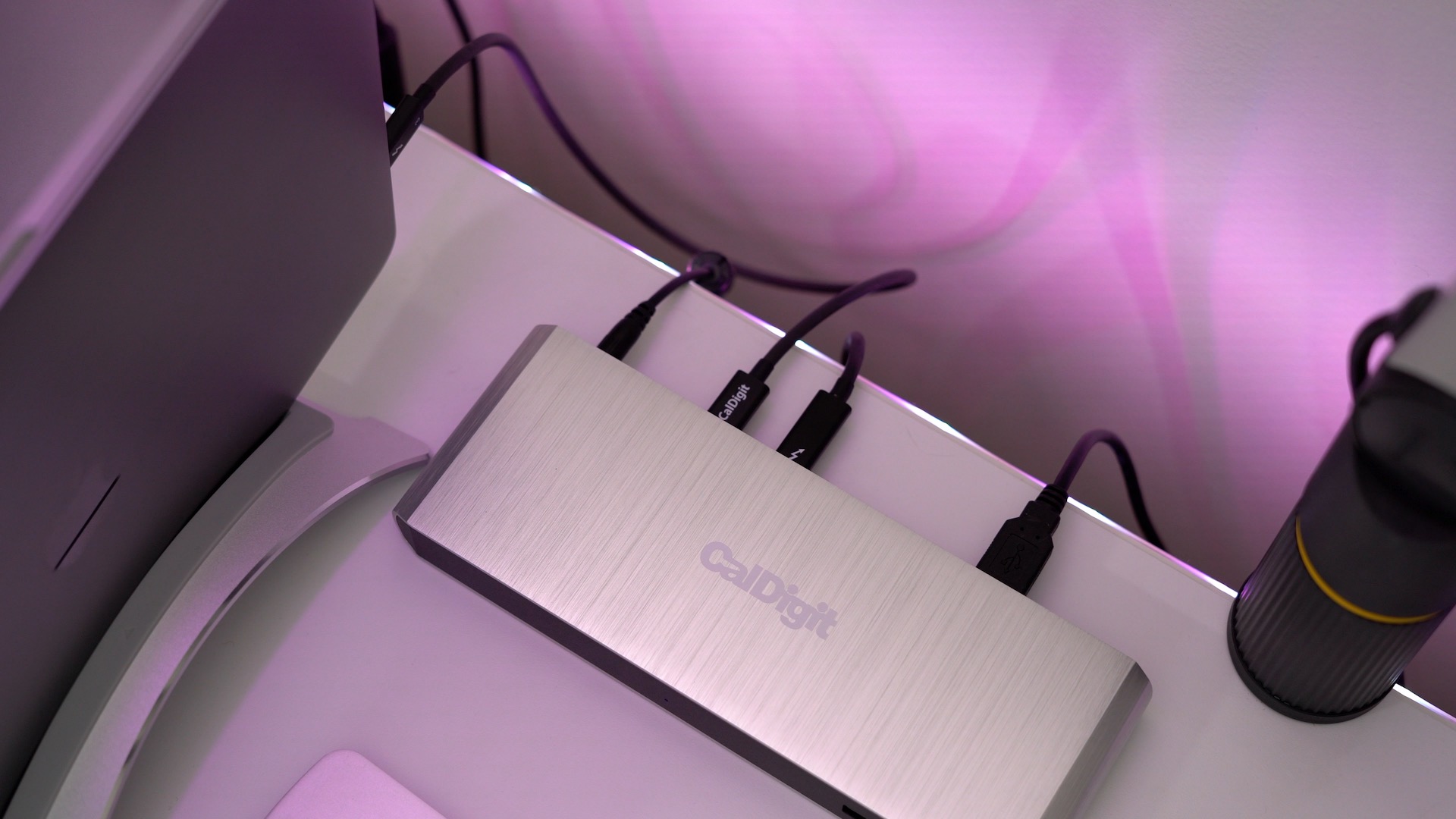 As an LG UltraFine 5K owner, I like the idea of being able to daisy chain the monitor to my MacBook Pro via the TS3 Lite dock. I was able to test this out, and it worked just as expected. But since the UltraFine 5K Display already features three downstream USB Type-C 3.1 gen 1 ports, some users may find that the display itself, when accompanied by a few dongles, offers enough connectivity options to get by.

A lack of power 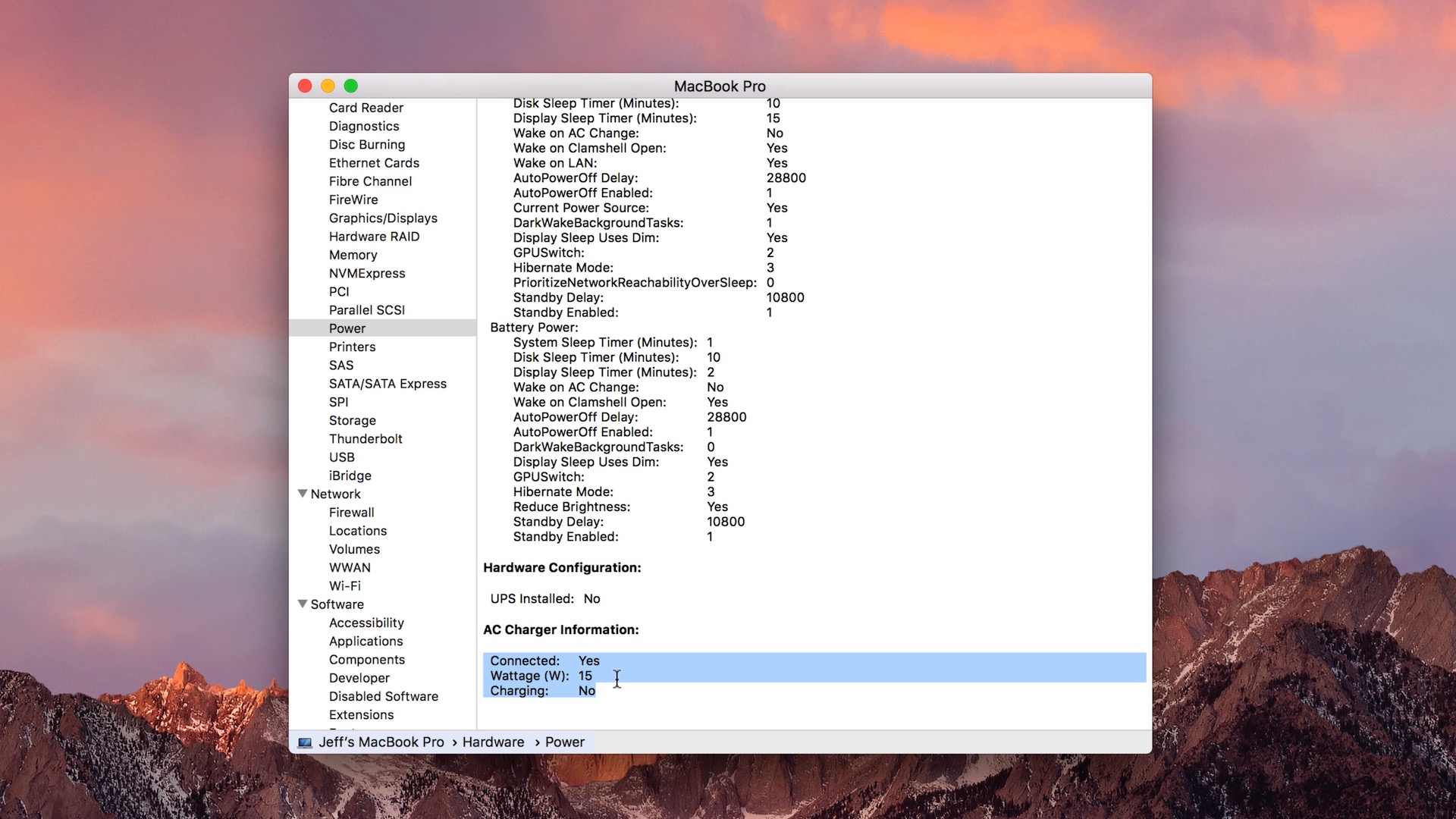 It seems strange at first, but after testing out the dock with a fully charged 2016 13-inch MacBook Pro, I found that the machine was able to tread water and stay fully charged even while sipping just 15W of power from the TS3 Lite. This occurred when I kept the UltraFine’s display brightness around 75% while just browsing the web. As soon as I cranked up the brightness and started exporting videos, I noticed that the battery power began to dip down, although certainly slower than if the dock was not connected. Eventually, the 15W of power would resupply the MacBook’s battery with a full charge, albeit very slowly.

Users who keep their laptops connected most of the time probably won’t feel much of an impact from the lack of power delivery. That said, if you often move around with your MacBook Pro, you’ll need to connect a second power cable to feed it enough power to be ready to go when you leave your home or office.

CalDigit’s $200 TS3 Lite Thunderbolt 3 dock works as advertised. It allows users to connect two 4K displays or a single 5K display, and provides needed connectivity options like USB-A, USB-C, Gigabit Ethernet, DisplayPort, and more. Because it doesn’t provide the needed power to properly charge the MacBook Pro, it won’t be for all users. Also, keep in mind that there are other dock solutions on the horizon, including CalDigit’s own TS3 dock with 85W of power delivery, and a Thunderbolt 3 dock from OWC.

Thunderbolt 3, with bandwidth support up to 40 Gbit/s and the ability to drive two 4K displays at 60 Hz, was developed by Intel using a USB Type-C connector.