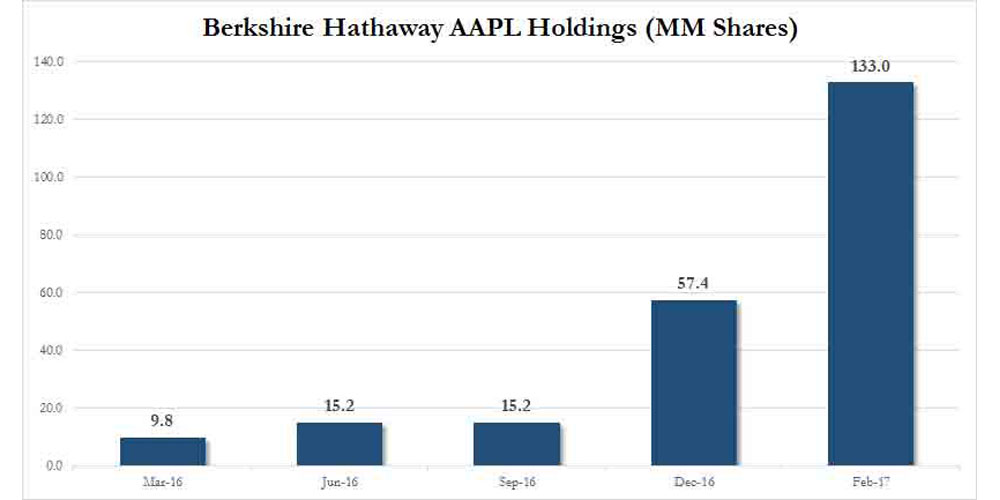 Billionaire investor Warren Buffett certainly appears to have revised his view of Apple bigtime. Back in 2011, he famously said that his conglomerate Berkshire Hathaway had held very few AAPL shares in the past ‘and we’re likely to hold very few in the future.’ The reason, he said, was that the company’s future was too difficult to predict.

By May of last year however, the conglomerate held more than $1B worth of AAPL stock – a disclosure that helped the stock climb 9%. By December, that holding had increased to 57M shares worth $7.7B. Now CNBC reports that the company now holds 133M shares worth a staggering $17B …

Billionaire investor Warren Buffett, chairman and CEO of Berkshire Hathaway, said that he more than doubled his holdings in Apple between the start of 2017 and the tech company’s most recent earnings report.

The purchases that Buffett revealed on Monday give Berkshire Hathaway about 2.5 percent outstanding Apple shares. It also makes Apple one of Buffett’s company’s largest holdings, second only to Coca-Cola.

Asked to explain the reason for this huge bet on the company, Buffett said that the investment decision was made mostly on the basis of consumer attitudes to the company and its products.

The legendary investor said that he upped his stake because of the consumer-retaining power of Apple and its CEO Tim Cook’s smart capital deployment strategy. “Apple strikes me as having quite a sticky product.”

He said that Philip Fisher’s book Common Stocks and Uncommon Profits had led him to learn more about the consumer view of the company.

“He talks about something called the ‘scuttlebutt method,’ which made a big impression on me at the time, and I used it a lot,” Buffett said. “[It’s] essentially going out and finding out as much as you can about how people feel about the products that they [use.]”

Buffett predicted that Apple would beat his own conglomerate to become a trillion dollar company, and jokingly offered to swap with Tim Cook.